Fresh paint outside and on the boards and the snow has been well shovelled. The new benches and wooden staircase still look great. There were 12 pleasure skaters and a happy scene. Ice is in great condition, they are serviced by the flying squad.

30 shinny players, about 1/3 with helmets. 3rd scrape and flood of the day. Skaters are happy.

From the City's "rink hotline" "Due to flooding at Withrow clubhouse this rink is not operational today."

"I went to Withrow Park last night in hopes that there would be enough bodies for spirited game of shinny as when I initially drove by there were no skaters on the rink, much to my surprise there were about 10 skaters waiting in the rink house. They weren't allowed to on the ice to skate as there was a couple inches of snow (pond like conditions) and in dire need of a hard scrape/flood. I noticed the frost build-up along the boards is getting bad and could pose a serious problem later in the season if this cold snap continues.

The rink attendants said they dispatched the flying squad at 3pm to service the rink, as of my arrival shortly after 6pm, there was still no call back from city dispatch. This same discussion was being had with the rink staff/patrons as more and more ladies showed up to skate only to be disappointed.

I left the rink at 6:45 after waiting around in vain in hopes of the flying squad making a timely arrival, and there were still MORE women showing up to play, I would say there was at least 20 women turned away. Why are there 2 rink attendants on site getting paid to sit around on the tax payer's dime when the rink apparently hadn't been safe enough to use for AT least 2 days?! Talk about a ridiculous waste of money!

Women only have 2 hours per week allotted for shinny at this rink and apparently this is NOT the first time this season that the rink has fallen into complete disrepair and had to sit idle due to lack of maintenance.

Is there any way we can get the ice to be safe and useable for the rest of this very short outdoor season? Who is the maintenance supervisor?

''I was just wondering if you would be able to tell me if the Women's Shinny timeslot (6pm-8pm) at Withrow Park will actually be happening today? I tried to call today but couldn't get a straight answer from anyone, I was given 4 different numbers/people to try, with no luck.''

I also tried 416-338-RINK but that was fruitless for information regarding current ice conditions.

I just don't want to show up & be disappointed or waste my time, like I have the last 2 Thursdays I have showed up to play. Any news would be greatly appreciated.

M.G. said that Mark Hawkins got back to her right away, and that the ice was excellent. 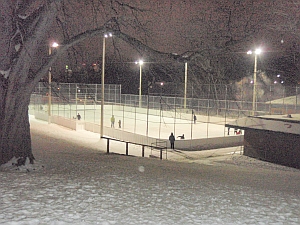 light in a dark park

At 7.30 pm there were 10 skaters (pleasure-skating time) plus four more changing into skates. Inside there were four guys in the staff office, only some of whom seemed to be actually on duty. They were very helpful about me putting up the cityrinks.ca poster, offering stick pins. Their bulletin board also had the sign, "Respect Women's Hockey," and another longer declaration of social inclusion.

They said that they get ice resurfacing usually twice a day, sometimes only once, and that they never know when the flying squad is coming. That also siad that they never use scrapers or shovels on the ice because they are not allowed to. If people piled heaps of snow on the sides, a puck could get caught underneath the zamboni, and then the Local 416 guys would be angry.

They took the shoveling bulletins and read them with interest.