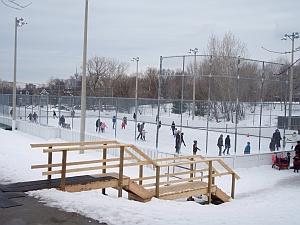 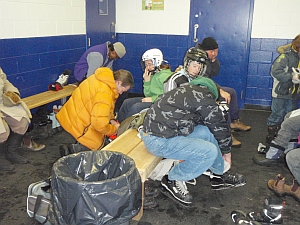 new benches in the changeroom

Last day. The rink was very full, everyone wanting one more skate. Home Depot has done a fix-up and the floor has rubber tiles, the walls have a new coat of Maple-Leaf blue paint, there are more benches, and the office seems to have been turned into a changeroom, to add a bit more space to the other two changerooms -- a warren of little rooms. The other two little tiny changerooms were jammed with skaters, but the office change room had only the rink staff and a couple of people asking for information. It looks like the staff reclaimed the office as soon as the ceremony was over. The same staff person said that even though there were so many people skating and the ice was good, at 6 pm he would lock not only the changerooms but also the ice surface. He wouldn't let people just carry on skating, as they do at other city rinks.

And no one stops this nonsense, people just obediently trot home, leaving the rink their taxes pay for just locked up tight by the city's hapless young rink staff. With the compressors continuing to run until morning. Very strange.

This morning the Maple Leafs held an outdoor practice at the rink. The event was part of the Leafs'Hockey Rink Legacy program. The Leafs and Home Depot have made donations to five Riverdale-area rinks. At Withrow they paid for benches, signs, rubber mats and snow blowers. Mayor David Miller, councillor Paula Fletcher and an executive from Home Depot made short speeches before the start of the practice.

Children from three local schools were brought to the practice and sat in bleachers at the side of the rink. The children were wearing T-shirts with the Maple Leafs logo on it. Aside from the children, there were maybe 200 people watching the event. Most seemed to be local residents. There was a lot of media as well as security. A large area was cordoned off with yellow tape and there was a heated VIP tent.

The Leaf players were surrounded by children looking for autographs as they walked along the path to and from the team bus. The practice itself was fast-paced. The Leafs played a scrimmage and seemed to be skating hard. They put on a good show.

The rink is quiet and the ice not great but not awful. The staff say it is safe and a good rink to work at, except for the floods (that is the leaks, not ice maintenance). 2 shinny players. Staff say that kids who are little enough that they always come with their parents, are easy, most of the time, to get into a helmet. Unfortunately adults won't and don't like being told and older kids and teens are even harder.