You are on the [Rink Diary] page of folder [Withrow Rink] 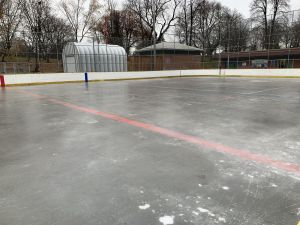 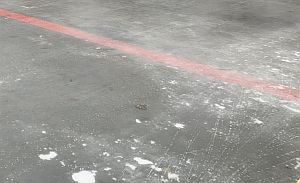 This rink is marked open but skaters may have decided it looked unready.

Opening day. Staff said there were skaters there immediately -- word had already spread.

The city's rink website says the rink will open on Jan.21

The city's rink website says the rink will open on Jan.19

Email from a skater to Councillor Paula Fletcher: I was wondering if you have any information regarding the rink at Withrow Park? I have received conflicting pieces of information about its numerous delays as well as whether or not it will be operating at all for the 2019 season. Needless to say this has very disappointing to everyone in the neighborhood that the city could not complete a renovation of the rink in an 8 month period.

Are you able to shed some light as to what has transpired up until now as well as what we can expect in the future?

Response from the Councillor's office: I don't know the origin of your information about delays in the construction of the new rink at Withrow but it is not in line with the actual timeline provided by staff....The good news is it will be opening very soon. Councillor Fletcher will be sending out an announcement regarding the opening and I will be sure you are on the list.

The opening has now been moved into January 2019. The city's website says: The refrigerated slab, refrigeration equipment, rink boards, chain-link fencing and lighting will be replaced. Accessibility landscaping and spectator seating will be added on the east side of the rink. 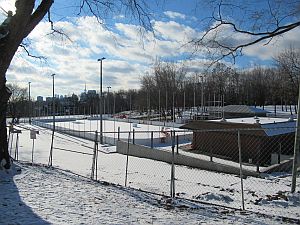 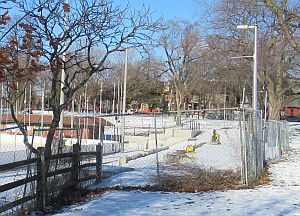 Until four days ago, the city's outdoor rinks web page said that the rink would be opening on Nov.24. That was changed to "delayed opening," but the web page text sounds as though it may not be opening at all this rink season: "The artificial ice rink is undergoing renovations from June 2018 to May 2019. The refrigerated slab, refrigeration equipment, rink boards, chain-link fencing and lighting will be replaced. Accessibility landscaping and spectator seating will be added on the east side of the rink."

This rink was supposed to open on Nov.25 but it never has yet. The ice is barely there on the concrete. There is no explanation either on the rink or on the locked change room doors. The web site says it's closed because of the "ice quality." Someone must know why it's not working, but they're not telling. 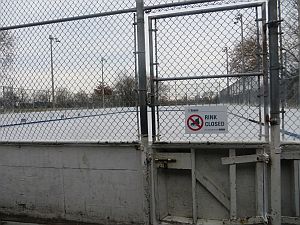 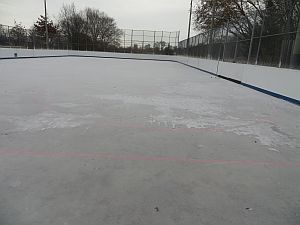 a very thin layer of ice, hardly any

From Parks (April 2016) "currently under renovation, scheduled to be open next year."

This rink was scheduled to stay open until March 20, but it was shut down for the season on March 10.

Just after 12 noon, the rink was open and there were two skaters. Temperature: 2 celsius, in full March sun. The ice had lots of bits lying on top (shell ice) and clear zamboni tracks all the way up and down. The rink house was open with a building attendant inside. She said the rink was closed yesterday but the building was open and staffed. 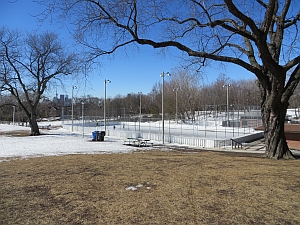 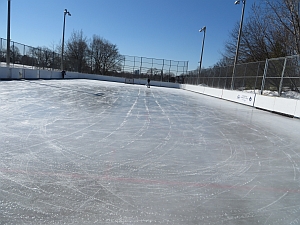 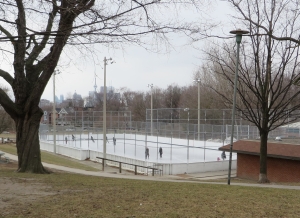 skaters on New Year's Day, but no changeroom access

This time the building was locked. There were several families with young kids changing into skates outside. Two of the kids were crying (it was a cold wind) and it looked like the parents were losing patience as they squatted on the ground trying to do up skates. 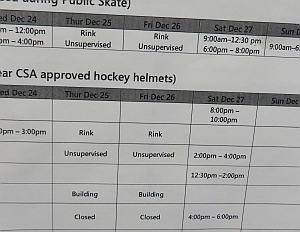 At 1 pm there were very few people on the rink but more seemed to be arriving. The building was open and people were changing into their skates. The staff room was open as well but there was no sign of a staff person. A holiday hours sign was prominently posted, saying the building was closed. 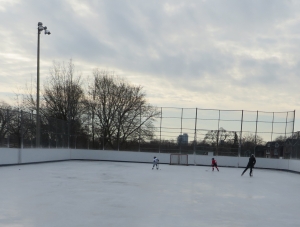 only a few people skating at 1 pm

A problem with the HOLIDAY HOURS: it appears on the city's rink information website/311 that almost all of the city's rinks will have their changerooms/washrooms locked on the three main holidays: Christmas Day, Boxing Day (yes!), and New Year's Day. You can skate on most of the rinks but you can't get your kids out of the cold to change their skates and you can't take them to the washroom. This is true for Withrow Rink. 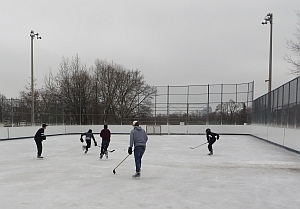 The rink was open with five shinny players (one with a helmet). The rink house was open and warm, even though no staff were there. Ice looked good. This rink, like many others in the city, still has its outdated rink helpline sign up on the tiny bulletin board. The number hasn't been connected for years (it's 311 now) but the sign stays up because it was put up with glue and it's hard to remove. 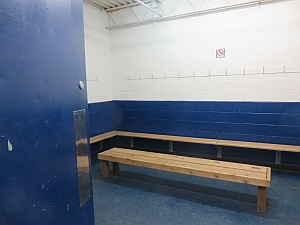 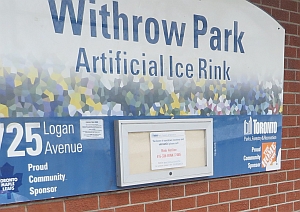 The rink was listed as closed in the morning, then switched to open by afternoon.

The rink was scheduled to open yesterday, and the city listed it as open, but today the temperature went up to 14 celsius and the rink was shut down in the afternoon.

Today, Withrow Rink was finally listed as "open" on the city's website.

Today there were still trucks parked beside the rink, there was a fan blowing exhaust out of the compressor room, and lots of tools around. Nobody was in sight to ask, though. 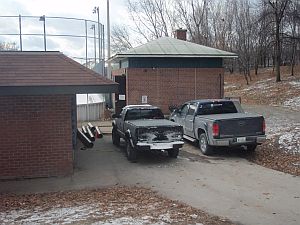 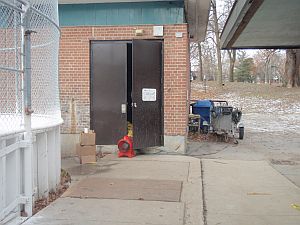 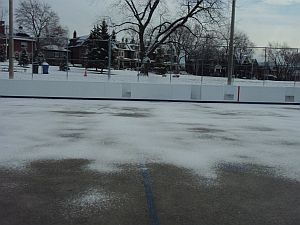 no ice on the rink

The rink is obviously not going to open on Saturday. Maybe some water damage was done here during the August floods, and it wasn't fixed in time. Another rumour is that there was a disagreement about who should pay, and that held up the repair work.

The fact is, Withrow rink is once again having trouble with its plant -- a yearly occurrence by now. Is the problem that is sits so low in the hollow that any extra stormwater or even winter meltwater gets into the compressor room? 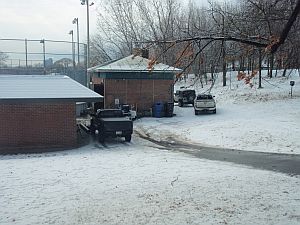 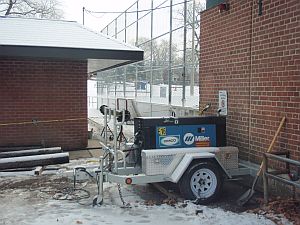 Cimco is on the job 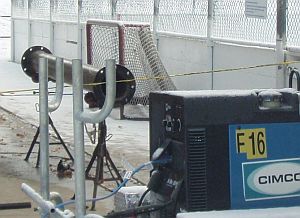 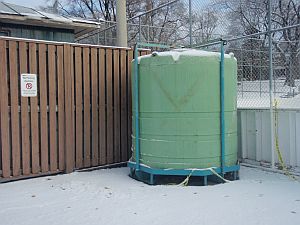 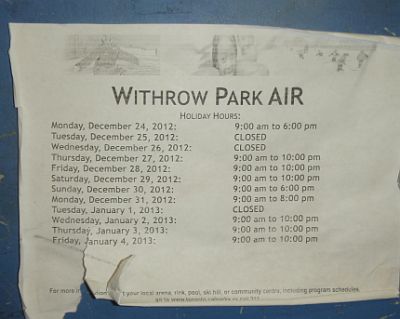 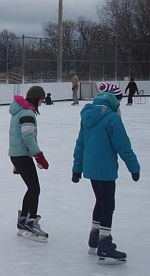 The central change room is open and warm. There is no rink staff person and the side change rooms are locked, but the washrooms are open too. The change area is so packed with skaters that they have to take turns to sit down. Despite the sign, lots of neighbourhood skaters have figured out that the rink is open on Boxing Day -- as promised on the city's website.

1:50pm: I called the local rink line in advance to ask about the ice and got a busy signal each time - 3 times in an hour.

When I arrived there were 12 shinny players on the ice and 4 changing inside. The two rink staff said the zamboni had been by recently, and the ice looked to be in good shape. It was a bit thin in spots, but hard. There were no opening signs, and no posted schedules, but the staff offered the brochure.

As one of them exited the storage room I noticed two of the old green rink shovels, and some extra mats that weren't laid out yet.

For whatever reason, Withrow Park rink (in Riverdale) has not been easy to track down on line for a skating schedule, and as of today only lists Feb 20th!

-I've an old schedule from mid December that I'm going with for later today, but for all I know it's been changed.

At 2 p, there are quite a few shinny players, and the change room is open. The rink guard warns skaters that they'll have to get off the ice in a few minutes. 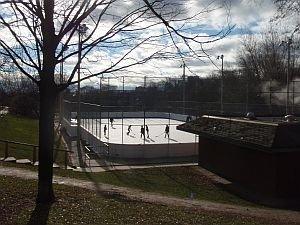 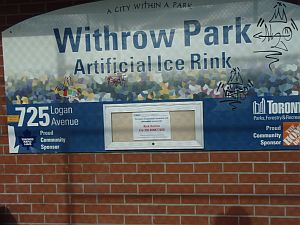 out-of-date phone number on bulletin board

From a rink user:

I tried Withrow Rink Monday and Tuesday of this week. Beautiful! However when the very competent daytime attendant left, a great pleasure skating opportunity dwindled. One "kid" was allowed on the ice with just a stick. No problem. Then a puck was introduced. Then 3 teenagers in street clothes and shoes got on the ice for a round of passing practice. I stayed out of it as I am no longer willing to be the "no fun older guy". Another man kind of wigged out and actually got physical with the youngest guy, grabbing his helmet and stick, throwing them over the boards. Meanwhile the attendant was just sitting in the office listening to music. It could have become ugly, but a passerby intervened.

3.45pm Rink closed, no staff. There was a sign on the change room door that said the rink would be open again on Saturday at 9am. (There are a few kids on the ice that had sneaked in through the back Zamboni gate.) There were machine noises coming from the buildings that seemed to suggest the compressor was still running and the compressor room had not been flooded. There was a lot of fast running water coming down the slopes around the rink. The ice was wet and this covered almost the entire surface of the ice, all the way to the edges, except for one corner. More of the ice was under water than at Dufferin and the other rinks I visited. It didn't look rough. 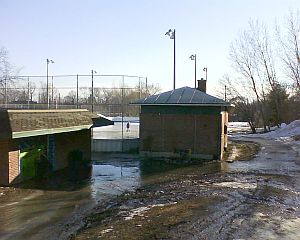 a tricky location for the compressor building 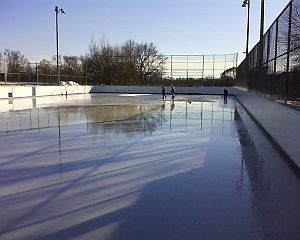 email from rink users P.M./T.S. to Councillor Fletcher, cc CityRinks The Withrow phone number gives a busy signal constantly. Alsoyour city schedule showed the rink opening yesterday but I noticed it was not open. Would it be possible to put this sort of thing on the web site?

4.30pm - 6 skaters on the ice, families mostly. It looks like unenforced shared use there are 2 hot shots zipping around while a couple families try to teach their youngsters to skate and to shoot the puck. One family leaving says her sons are tired of being knocked over. (the hot shots aren't knocking kids down only skating quickly past and surprising the little ones who then fall, luckily they are wearing helmets and snow pants). 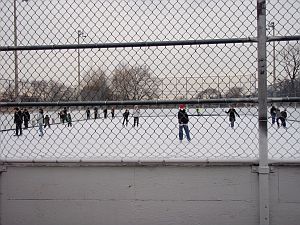 Machine disaster: apparently last night when it rained, the compressor room flooded and something (unspecified) blew up. So Withrow Rink is closed indefinitely.

Sometimes the news is better than anticipated. After the doom and gloom predictions at Withrow, the rink re-opened today (according to 311).