You are on the [TheSeason] page of folder [What Needs Fixing]

Artificial outdoor ice rinks work best (and most energy efficiently) when the sun is at its weakest during the year. The sun is at its lowest angle (and is hence weakest) in the northern hemisphere on December 21st. It follows that the best and most efficient time to run outdoor artificial ice rinks is in the weeks centred around that day. The chart below illustrates how the Parks department has strayed away, rather than toward, this ideal season.

Keeping the rinks open in March is a losing battle against the spring sun. The rinks should be opened in November and closed at the end of February to best take advantage of the low sun and the related savings in energy costs. 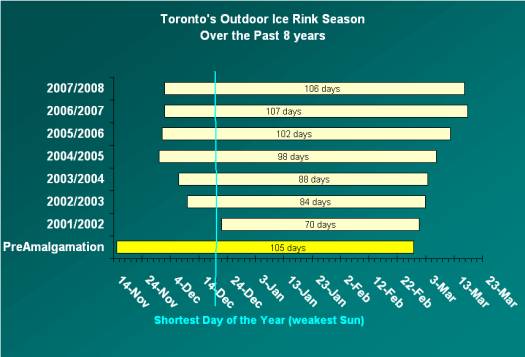