Written in 2007 by CELOS, funded by the Metcalf Foundation, this report provides outlines of operational issues and their possible solutions. The report is still relevant today (2010).

Some outdoor rinks are often empty, whereas others are full to bursting (which is not fun either).

How to fix it:

Neighborhood rinks can play several roles. They are obviously places where people can skate and play shinny hockey for free, or permit organized hockey times for low fees. But they can also be neighborhood social centres for winter, where Torontonians can meet and engage with one another. This potential is far from fully realized at the citys compressor-cooled outdoor rinks, but there are many good possibilities.

Families with young children are the secret weapon of rinks. Rinks that make friends with such families will have loyal friends who use them often, and around which all the rest can be built. Families are attracted to comfortable rink houses and double-pad rinks where they can be sure to get pleasure-skating time.

Dufferin Rink is one such place, and the details of what works well there are all in the Outdoor Rink Handbook published in 2006. Dufferin Rink staff found that there should be some games and toys for kids, storybooks, cheap nutritious food, a wood stove if possible, helpful staff if a parent needs help, and a quiet spot for fussy babies.

Families are the matrix for a sociable rink but rink change areas are usually a small space and in order to balance all groups, the change area mustnt be turned it into a day care. Youth need to feel theyre still in a real rink house. Rinks dont do well as ghettos, and they can only be social centres if they include all ages and some people with problems, too. If any one group begins to treat the rink as their own turf  parents, or the old card players, included  its important for rink staff to restore balance.

Outdoor rinks are places of physical activity for all ages and stages, and for youth in particular theyre practice grounds for athletic skill. Its important to give each age group a time when they can play well without too much crowding or peer bullying. This means, clear age rules and hourly, daily follow-up. When rules are fair, and worked out through informal consultation, they get cooperation in the long run.

In addition, rinks are places where youth like to socialize and also where they like to try out their power. Staff at outdoor rinks are often very young and that makes it almost impossible for them to regulate the social life of a rink. Where there are mature staff with a real interest in and curiosity about the young people who use the rink, youth can find a lasting resource, sometimes even a home away from home in the winter. 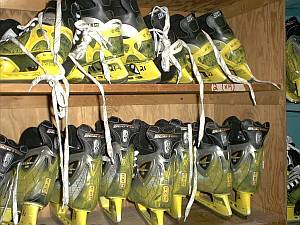 But when the fifty sets arrived and were sprayed yellow and $2 loans were set up, the number of kids and adults who came to skate doubled. The supply of skates seems to have attracted more skate donations. Zamboni café income paid for even more, and now there are close to 80 pairs of skates available to rent for $2. This is cheap enough that whole families come out, teenage shinny players bring their girlfriends on Fridays, and kids whose families cant afford new skates every year as they grow, can still keep playing shinny. Skate rental could be considered for a few more outdoor rinks in the city.

In order for people to talk to each other, they need a story magnet, something beautiful to loosen their tongues. In 1994, Dufferin Rink friends discovered that winter rink-side campfires were one of the easiest, cheapest, and most dramatically successful ways to get rink users talking to each other. (The idea was borrowed from the winter campfires set up by Parks staff at the side of Grenadier Pond during cold snaps, for many years.)

By then the fires were most often cooking fires, with soup or hot chocolate or peoples own food if they were having a birthday skating-party. (The campfire birthday parties were never closed  parks have no walls!  and often strangers who joined the fire circle got to know new people through these parties.)

Skating makes people hungry. At Dufferin Rink there are two very small community kitchens, one of them a snack bar called the zamboni café. It offers a variety of foods prepared on site, including soup, English-muffin pizzas, cookies, and hot chocolate, seven days a week. The rink staff prepare and serve the food, often together with volunteers (mostly high school students doing their community hours). Although food prices are kept very cheap, the snack bar is so popular that it makes about $20,000 a winter for putting back into expanded park programs.

Parents tell the rink staff that they can get their kids away from their computer games and out of the house with the promise of a skate, a mini-pizza and a cookie. The hospitality of a rink is enormously increased by the smells as well as the taste of good food. There are two other city outdoor rinks which have kitchens. A number of other rinks are attached to a community centre and so have a kitchen nearby. Not every outdoor rink could or should have food, but some rinks are ideal for such an addition.

- The permit office has a policy of no refunds if the rinks are closed for bad weather. There are also no refunds for poorly maintained ice. Charging people for rink time even when they cant use the ice discourages permit applications.

- Rink staff are told to enforce a shinny-hockey helmet policy for adults that is so unpopular that its low compliance rate actually increases the legal risk for the city. Of the 99 rink visits when helmet counts were included for this report, only on 19 occasions were there any skaters wearing helmets. The four rinks where the helmet policy was strictly enforced for adults had much lower rink use.

- There is little or no documentation about the background of the mandatory-helmets-for-shinny policy. Staff could produce no information on shinny-related injuries, nor on claims against the city, nor data from other cities. Nor was there any memory of which working group might have discussed this policy before it was endorsed by the directors.

- A freedom of information request turned up the information that there have been only three claims against the City for injuries at outdoor ice rinks since amalgamation. All claims (indoor and outdoor rinks together) during those seven years added up to a total of $36,000. None of the claims were related to the absence of helmet use.

An organization that has frequent restructuring is obviously casting around a bit, trying to address some problems. During the last twenty-five years, there have been four major and three medium restructurings (re-orgs in slang) at Parks and Recreation (more recently called the Parks, Forestry and Recreation Division). The most recent one was probably the most drastic to date.

In the months since the latest restructuring, Dufferin Rink has been in the purview of thirteen different administrative sections:

Outdoor compressor-cooled rinks seem to be administrative orphans  not exactly at home in any part of the new park structure, certainly not owned by anyone who sees them as a vitally important resource for neighborhoods and community engagement. And it shows.

A park's existence is for the pleasure and enrichment of the citizens who use and cherish it. It is not just another place of employment that the city must manage, and citizens are not liabilities who get in the way of administrative efficiencies.

How to fix it:

Successful collaboration will pay the city back many times in healthier, happier citizens who love and support their communities. That is truly an opportunity worth taking. (Georgie Donais)

See the pdf for full Appendices.

Maps of all the outdoor rinks

Outdoor rinks "by the numbers"

Cancelling the December rink season will save either $800,000 (John Barber, Globe, August 29, 2007), or $569,400 (January 16, 2006 2006 Parks, Forestry and Recreation Operating Budget Overview, Appendix A), or $160,000 (John Barber, Globe, September 1, 2007), depending on which staff was the numbers source for costing the month of December. The Toronto Sun reported on September 21 that the whole outdoor rink season costs $2.9 million, which isn't a multiple of any of those numbers. But the 2006 "Operating Budget Overview" prepared by Parks management says the whole outdoor artificial ice rink season costs $1.7 million. The shaky numbers reflect an equally shaky City management approach to basic recreation.

The city has between 15 and 25 permanent staff who can operate a zamboni. Instead of diverting them to other work, at least some of the neighbourhood rinks could be operated by these staff without extra cost of seasonal staff.

Parks, Forestry and Recreation "by the numbers" -- to give a budget context.(see the pdf)

1. In May 2007, all Councillors received a big, colourful binder from Parks, Forestry and Recreation, called Councillor Resource Kit. Under Overview of Programs and Services, Artificial Ice Rinks (A.I.R.s) are omitted. Under Parks, Forestry, and Recreation by the Numbers indoor arenas are listed, but no A.I.R.s are on the list.

Moreover, in the Sports listing, there is no reference to hockey at all.

2. In 2007, an internal Parks report (Service Planning and Provision Strategy Options) showed an alarming misunderstanding of the difference between compressor-cooled artificial ice rinks and natural ice rinks. It stated that both kinds of rinks are "limited to a relatively short operational season that has recently been further reduced as climatic changes result in fewer days when it is possible to have natural ice or maintain outdoor artificial ice." This is incorrect. Properly-run artificial ice rinks function perfectly in the low-sun season, November to February. Climate change has not affected these rinks.

3. In January 2006, Parks management recommended to the Budget Committee that all A.I.R.s should be permanently closed, except Nathan Phillips Square and Mel Lastman Square. (Theyd be kept open 14 weeks.)This recommendation was not accepted at that time -- it often takes a few years for a staff recommendation to gain approval.