The Center for Local Research into Public Space (CELOS) has released a new report on the operation of outdoor ice rinks. Based on over a decade of experience in promoting the enjoyment of Toronto's outdoor rinks, the report catalogues ways in which the city can more effectively offer this service to skating enthusiasts, while minimizing cost, and protecting this unique treasure. For one thing, the season should be mid November to end of February, not December to mid March, owing to the angle of the sun. 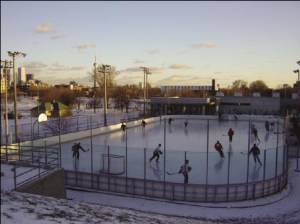 Toronto has the most outdoor compressor-cooled ice rinks of any city in the world. There are 4 rinks at central locations and 45 in neighbourhoods. Twelve of the rinks are double pads  one pad for playing hockey, the other pad for pleasure-skating. The rest are single pads where hockey and pleasure-skating take turns. A double-pad rink costs over $1 million to build, not counting the rink change-rooms. A single-pad rink costs around $700,000. So these rinks are one of Torontos treasures.

But they need some help. For many years the compressor-cooled outdoor ice rinks were open from mid-November until the end of February when the sun got too strong. Torontonians could skate outdoors for about 15 weeks each winter. But in 2001 City Council voted to permanently reduce the season of the neighbourhood outdoor rinks to 10 weeks a year, not opening them until late December. The rink season went down from 106 days to 70. This resolution caused such an outcry by skaters that 2001 was the only year when it was actually carried out.

Even so, since 2001 the outdoor rinks have opened between two and four weeks late every year. Finally in 2007 the mayor announced that rinks would not open at all until January 1 2008, to save money. The Mastercard Company came to the rescue with a one-time donation of $160,000. But its not impossible that the rinks could be a pawn for the same announcement again next year.

Beyond that, there seems to be persistent confusion at City Council and among City management about how and when these rinks work best. The confusion is reflected in a recent Parks, Forestry, and Recreation document SERVICE PLANNING AND PROVISION STRATEGY OPTIONS. It conflates natural and compressor-cooled outdoor rinks, stating that both kinds of rinks are limited to a relatively short operational season that has recently been further reduced as climatic changes result in fewer days when it is possible to have natural ice or maintain outdoor artificial ice.