10:40am The ice has been cleared of last night's snow and is in good shape. A permit group is playing a vigorous game of shinny.

5:20pm There are half a dozen shinny players on the ice, all wearing helmets. The ice looks reasonably good, but is rough near the boards. The operator says the rink was able to open on time this morning despite yesterday's snowstorm. He says last night while it was still snowing he cleared the ice 5-6 times so that when the roving crew came in the morning there wasn't much snow to clear. Asked about nearby Valleyfield which was still covered in snow, he says in Etobicoke the priority are the 'majors' (larger rinks with boards and changerooms). Once the big rinks are cleaned, the roving crews go to the minors - smaller pads like Valleyfield and Buttonwood. He said a roving crew had taken Westway's snowblowing equipment and was out cleaning the smaller pads as we spoke. When it was pointed out that Sunnydale Acres, a 'major', was still covered in snow, the operator says there was an equipment problem there, but he didn't know the details. Three young men are inside the staff office along with the rink operator. They may have been rink guards.

It turns out the phone message was a false alarm. The rink ice was a bit thin toward the boards, but really not bad, and the hockey players said the ice was fine. The zamboni driver said he hadn't heard anything about the rink being closed. 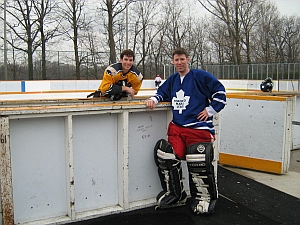 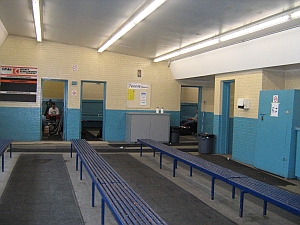