You are on the [Rink Diary] page of folder [Westgrove Rink]

The ice has been disappearing over the past few days. Today it was too soft to skate on but the rink wasn't closed. There was a mechanical problem earlier, and I think it's happening again.

[email was forwarded to 311: as you see, a skater is reporting that Westgrove Rink ice is too soft to skate on, and has been trouble for some days, but at 2.47 pm it's listed as open. Please clarify]

A gorgeous winter day for skating.. I went expecting it to still be closed but I saw a group of kids on the ice as I arrived. It was a group of 9 kids with teacher; they all looked like new skaters and were having a blast! It took me a while to find the entrance to the ice, first finding a number of padlocked doors in the fence before one opened up. There was a set of benches next to the ice where the kids had left their shoes and bags. No signage with a schedule. All I saw was a sign saying "Rink closed" that had been flipped around. I guess it's open now?!

The rink is marked as open for the first time this season.

This rink is marked as closed for mechanical issues on the city's web page. The only signage on the rink itself is a tennis sign, which says "Tennis courts reserved for tennis play only. Do not remove posts and/ or nets."

The numerous apartment buildings nearby suggest that maybe the people that live nearby would prefer to use the dry pads for other sports. 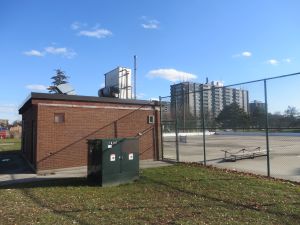 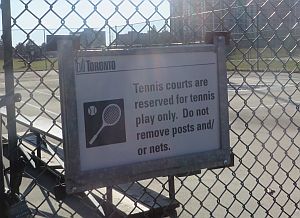 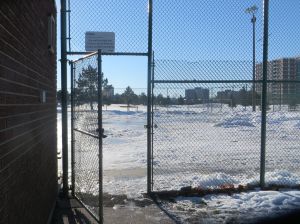 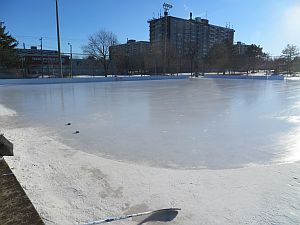 ...and the ice looks wonderful.

A man and a kid were sitting on the bleachers lacing up their skates. The man said: "the ice is pristine." True.

The rink has opened for the season.

This rink has not yet opened for the season. 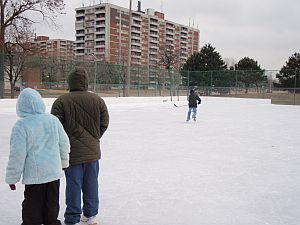 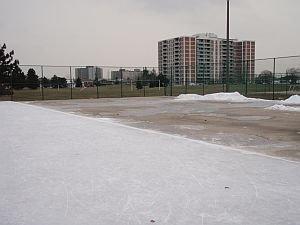 At 4.05, 9 skaters were just getting ready to leave, with 3 more people arriving (kids being dropped off from cars). There is no nearby place to park -- this rink is set in a large bare area of grass near the intersection of two fast roads, with high rises and some bungalows located a distance away. One of the skaters said that the rink is busier at night, with shinny hockey players. 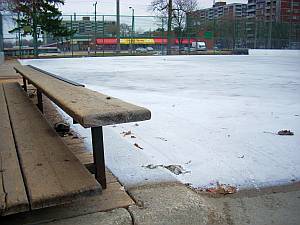 12pm A woman is leaving the ice. The rink is empty. The ice is in good shape. 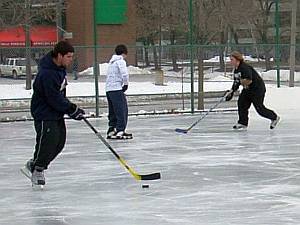 11:30am There are 4 boys playing hockey. They say the rink will be "pretty dead" until Christmas break when the number of skaters will pick up. There are no changerooms. Skaters put on their skates on portable bleachers next to the ice.