It is remarkable that the front door of the West Mall rinks is always locked when the rink is open. These doors are immediately adjacent to the convenient TTC stop and shelter. Access to use either rink is only available through the back door, which, for TTC riders, requires the walking to and then away from the parking lot to the north.

I should appreciate a response on why this excellent facility has its main entrance continually locked.

Thank you for your email regarding the door issue at the West Mall rinks.

I spoke with staff this morning and they have assured me that they will keep the doors open when possible. This action was undertaken while undergoing a review of how to deal with some security issues the facility was having. Hopefully this will resolve the issue and you will be able to access the facility from the front end.

10 a.m. Two skaters on the hockey rink, none on the pleasure side. The entry gate from the parking lot is open. There are no rink-schedule signs along this walkway nor by the doors. Inside there is only a little paper citywide schedule tacked up on the bulletin board, with West Mall outlined in ball point.

On the other side of the rink, a broad walkway leads from the bus stop on The West Mall right to the actual front doors, but as usual, those doors are locked. Ironically, the only metal rink-schedule sign is fastened to the right of those locked doors. So people can read the sign, but in order to get to the rink, anyone coming by bus has to take a long detour over the grass, around to the parking lot and go in from there. What is the message here? "If you don't have a car, we don't want you"? 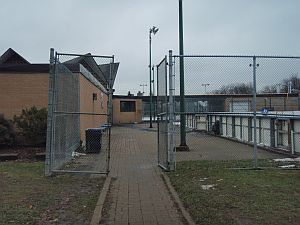 back gate leading in from the parking lot 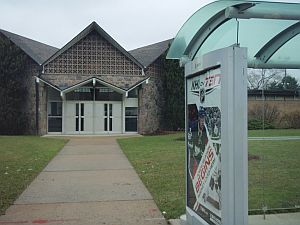 Front doors by the bus stop are always locked

At 1.30 pm both rinks were open and looking good. There were two shinny players on the hockey side and one on the pleasure-skating side. The boards on the hockey said no longer show the MLSE or Home Depot logos, for the first year. There is still a frayed Home Depot/Toronto Maple Leafs sign on the outside of the change room.

The zamboni driver told me I couldn't take pictures, not even if a skater gives me permission, not even if there is no person in the photo. One really has to wonder where these folks get their ideas. There are often new staff. From their first minute at the rink they have their own approach -- and they have absolutely no doubt that they are right and have the authority. 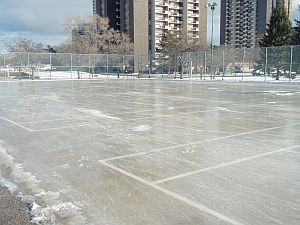 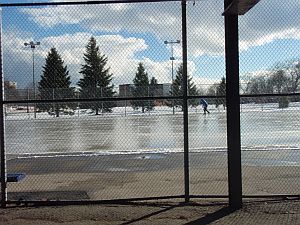 the staff said I couldn't take this picture 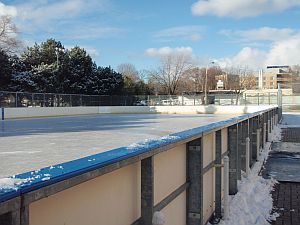 the staff said I couldn't take this picture either 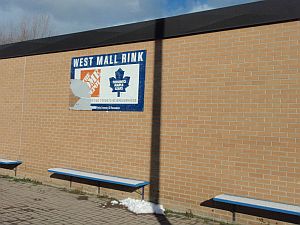 nor this one, of the last frayed partnership sign

Word has come down that the pleasure-skating side is now open too. Only four days late.

The city had listed West Mall as closed on opening day by 10am this morning. The reason: still building ice. The gates were open so we walked right in. The ice was mostly solid but not thick. There was slush on the east side. There was some sign of an attempt to cool the tennis court leisure skating pad. Like last year, they started flooding too late (Wednesday) and like every year, they accuse the leisure pad for taking away power from the hockey pad. So they shut it down. At West Mall, if you don't have a shinny permit or know how to play hockey, you'll have to celebrate rink opening a week after your friends. Rink staff also blamed the weather and people who tell them what to do.

They hoped to get to zamboni on later in the afternoon to flood and reopen the hockey side by the evening. 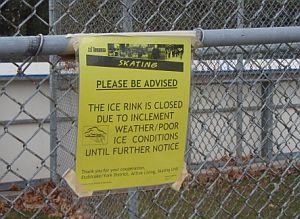 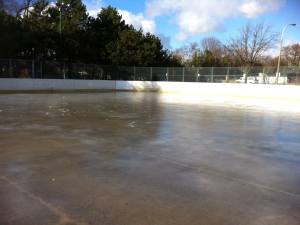 hard but thin ice on west side 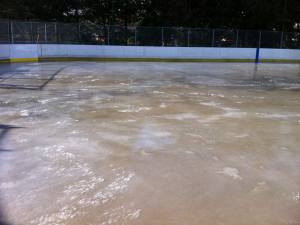 slushy on east side 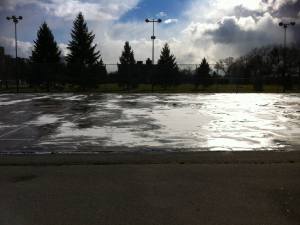 compressor turned off again on leisure pad
hosted by WordAndData.com | powered by pmwiki-2.2.80
Content last modified on November 26, 2014, at 08:15 AM EST