No sign of any flooding, not even mats out. Supposed to open tomorrow but obviously decided not to. 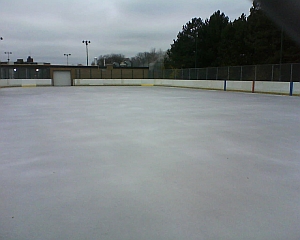 Compressors were on and have been since Sunday according to a staff guy who arrived as I was leaving. They've got half an inch of ice down and it looks good. They want another quarter inch/10 more floods (he says) on top before they open -- hopefully tomorrow. Mats are out already, but the rink area is fenced off and the change rooms are closed.

There seems to have been some back-sliding here. There's definitely no night flooding. Lots of frost on the hockey pad, but some of the rink looks pretty close to concrete -- so they'll probably lose it tomorrow when the weather gets warmer and the sun comes out. No lights and no ice on the pleasure-skating pad. Some mats were out.

Staff said there will likely be no ice till next week. For comparison: Dufferin Rink 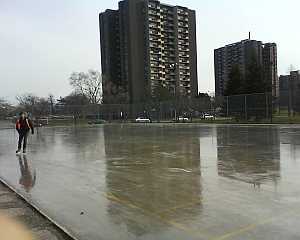 pleasure-skating side now finally open too 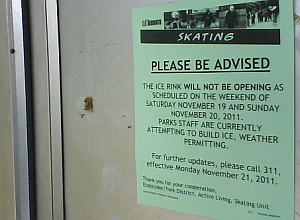 Morning: Pleasure-skating pad and hockey pad both open, ice looks very good, but the only skaters were 3 staff going round the pleasure pad! The change rooms were open if you went around the back but the front doors are locked and still have old signs on them saying the rink will not be open on 19 and 20 November.

A woman was leaving with her daughter and said that her kid had been playing on the hockey side earlier.

From rink user Eric HM, 7 pm: Ice was in very good shape, other than being a bit rough in one corner right against the boards (needs some edge work). One of the permits cancelled for tonight at around 7pm so we got to skate for a bit, but I think the hockey pad is almost 100% reserved on weekends. There were 5 teenagers and one younger kid.

From rink user David Purcell: The ice is in great shape with the exception of slight unevenness along the south east half boards. The attendant seems to be cleaning the ice more often than last year.