This rink is scheduled to open on the 21st of November. At around 1pm the fencing and building were all locked up and there was no staff in sight to talk to. The rink pads both looked swept and had a little bit of water in puddles. The compressor looked as though they were on. There was the standard City of Toronto poster about opening date on both entrances to the rink .

Overcast with some sun. The hockey pad looked like there was some ice, mostly frosted over. The building was open and maintenance crews were working on mulching leaves from the lawn around the facility. The parks staff there said that they had faced troubles with keeping the ice on the hockey. They decided to shut down power to the compressor on the pleasure to divert the energy to the hockey side. They said crews would be around to flood the rink in the late afternoon once the sun and temperature had dropped. Its unlikely that the rink will be ready for opening day. 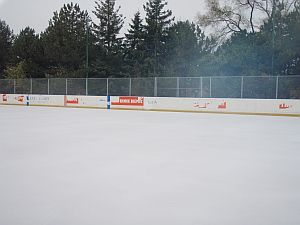 good ice on hockey side 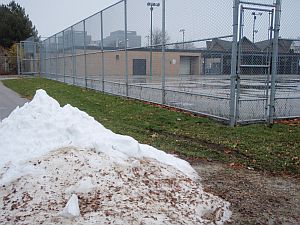 There is good ice on the hockey rink but the pleasure-skating rink is bare. The rink maintenance staff says that he didn't flood on the day shift, not even at 7 a.m. because he was directed not to. So he must have had to sit there with no ice maintenance during the whole day shift!

The maintenance staff person is normally a turf lead hand in North Toronto. This is his first year working at ice maintenance at West Mall Rink. He mentions that the front doors won't be unlocked this year because having the two entrances causes too much "circulation." So the rink users who come off the bus will once again have to wade through the snowbanks to enter the rink from the parking lot.

The hockey rink is in fantastic shape. The zamboni is flooding and scraping and the ice is unused since the rink is closed but the ice is perfect. thick enough, even and hard looking. I can't get on the rink because it is closed to the public though. I wait about 10 mins in case the zamboni driver can talk to me (he is the only staff there) but he is still maintaining the ice. I wave. No response, after all he is busy. The pleasure pad (converted tennis court I think) has puddles and I don't think the compressors are on yet.

The rink hotline and the city website say the rinks are mostly closed, but the 311 line reports that West Mall is open. This must mean, only the hockey side, but that's better than nothing.

The hockey side of the rink is open -- apparently they opened last Wednesday evening. Today, five guys were playing shinny in the warm, low-angle sunshine, with the ice holding very well.

The pleasure-skating pad is without ice, not turned on yet. 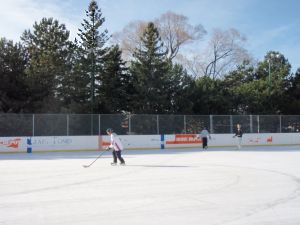 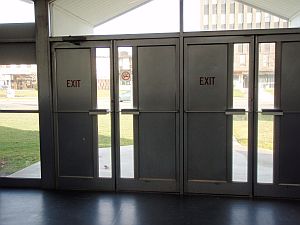 this is no exit, not an entrance either

The front doors of the rink change room are locked as usual, which means they are not an EXIT even though it says EXIT on them. Just as importantly, they are not an entrance, event though the bus stop is right outside those doors. Anyone coming on the bus has to double back and enter the building by the path leading from the parking lot.

The staff here say that they keep the front doors locked because otherwise people will be coming in from all over -- too much circulation -- it's a safety concern. What would make circulation a "safety concern" in a public building? The problem with this rink is that there is not nearly enough circulation -- i.e. it has shamefully low use for a civic rink. No wonder -- 10 days after it was supposed to open, ice-making hasn't even started on the pleasure-skating pad, and if a skater tried to come there by bus, she always finds the front door locked.

Today is a school holiday, but at 11 a.m there are only 3 kids on the hockey ice. The hockey ice looks excellent. The pleasure-skating rink is still bare cement, and the rink operator says he doesn't know when they'll start it up -- it was just too warm. He sounds surprised when told that quite a few other rinks are keeping their ice with less horsepower. 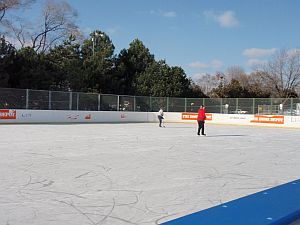 where are all the kids? 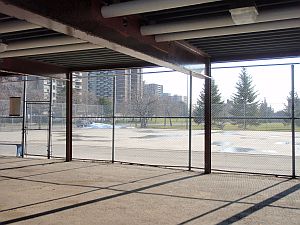 The astonishing news came via 311, that the pleasure-skating pad would be skateable the following morning. That was a fast turnaround. 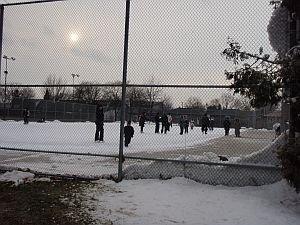 At 3.10, there were 31 people on the pleasure-skating side, 21 people changing into or out of skates inside, and 8 shinny players, all with helmets. The front doors were unlocked. There were three people, presumably staff, in the rink office, one of whom came down the office steps when I knocked, and let me put up the ombudsman poster. She said she would check with her supervisor later to make sure the poster could stay. The change room has two enormous bulletin boards, but they have been painted to match the signature Maple Leafs colours (blue and white), and there was only one small institutional notice posted on that whole broad expanse.