At about 1 pm the hockey side had about 8 adults and 8 kids playing hockey. It looked like a parent-child program but it might not have been because that's not in the schedule. The ice looked very good, although one parent worried that it was a bit thin. The boards have the Home Depot and Maple Leafs logos in quantity, and there's a special sign up on the wall. The impression one has is that West Mall Rink is there because of those two corporate sponsors -- but it's unlikely that they cover a fraction of the cost. 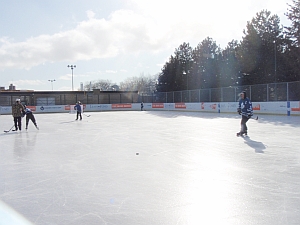 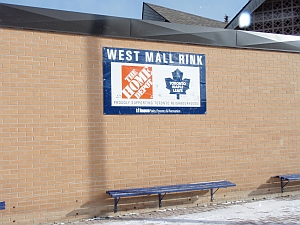 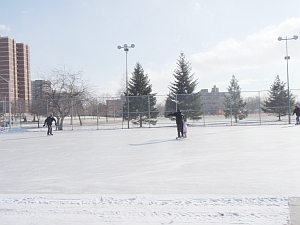 There were only four pleasure skaters, and it was a cold wind. Inside, the rink was clean as always, but monotonous, with not many people there, no food, no services, no neighbourly chat. The donours' paint job had painted over the bulletin boards, so they were no longer notice boards but just clean white surfaces. Antiseptic!

The rink maintenance worker was very friendly, though. He let parents stand and watch the hockey in the office, because it was cold outside and the office had the best view. He said he's not a lead hand nor an APO2 -- he was just helping out because they were short-staffed.

One odd thing hasn't changed from last year -- the main entrance, facing toward the street and close to the bus stop, was locked. There was a track of footsteps through the snow, leading from where the bus stops, along the long front wall of the building, to the edge of the car parking lot, and then onto the path that leads to the rink-side door, the one that's unlocked.

Wonderful that Giovanni Caboto got its front doors unlocked and the steps cleared of snow. If you look at the subject line, I've altered it to underline my other question about West Mall Rink ["All-season locked front doors at West Mall Rink"] -- can those front doors also be unlocked, since they provide safe, direct access to the bus stop?

Yesterday I saw that the front doors at West Mall Rink were still locked -- was that just an oversight for yesterday or is it a policy?

I just want to give you a chance to check into it before tomorrow's meeting with Councillor Davis.