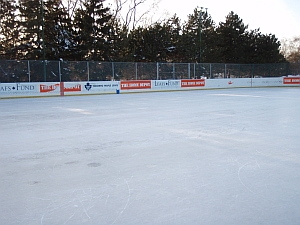 hockey pad has some tree shade

6 pm: Both pads are closed. The hockey pad is watery at the south-facing end but otherwise looks firm. The pleasure skating pad is terrible, with many gouges right down to cement. The zamboni operator looks unhappy that he had to close the rink, but says that a man fell twice, and it would be terrible if anyone got hurt by catching their skate on the cement. The operator also says that the temperature of the brine that's recirculating from the rink into the compressor room is 20 degrees Fahrenheit, almost the warmest he's ever seen. (Normally 10 degrees F.) That's the power of the sun, he says. "Maybe the weather will cooperate in the next few days and the sun will stay away."

There are three other people sitting in the staff room, but the operator seems keen to stay out and chip away at the bumps with a snow shovel. A shinny player arrives, looking disappointed, and then the zamboni operator makes his day: "you can go on, just stay away from that wet area at the end." 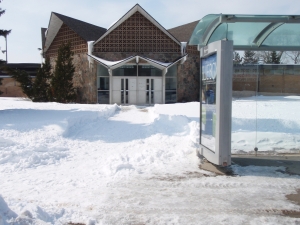 '1.30pm: 12 players on the hockey pad, all with helmets, and 10 on the pleasure pad, plus 9 in the change room. The ice looks okay on both pads. The front door to the change room is locked, even though it's the access from the bus stop right in front of the rink. People getting off the bus have to go all the way back and around by the parking lot, since only the inside doors are open.

3:20pm There are ten adults on the hockey pad. Three of the players are not wearing helmets. The ice is snowy and there's some melting right at the edge of the boards. (If you weren't looking for it, you wouldn't notice it.) Otherwise the hockey pad is good enough for a fast-paced game of shinny.

There are 8 skaters (parents and children) on the pleasure pad. The ice is hard and smooth.

11:30am There are 12 players on the hockey pad and two children on the pleasure pad. The ice looks good. The front doors to the rinkhouse are locked. Rink regulars know there is an open door to the changeroom on the rink side but someone visiting the rink for the first time might think the rinkhouse is closed. 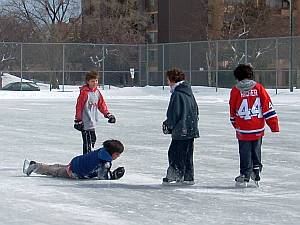 Boys skating on the pleasure pad
Click on picture to enlarge it.

2pm The sidewalks on the West Mall are still covered in snow making it hard to walk to the rink from Burnhamthorpe. The rink, however, is open. There are three people, a man and two girls, on the hockey pad. There are four boys on the pleasure pad. The ice appears to be in good shape, but there is some snow on the pleasure pad. A tractor has left some tracks on the ice.

9:30am The ice on both the hockey and leisure skating pads have been cleared of last night's snow. The Zamboni is just finishing the leisure pad when the CELOS researcher arrives. A team of young boys is having a practice on the hockey rink. There are two adult women and one child on the leisure pad. The front doors to the rinkhouse are locked, but one of the women says the changeroom is open. She came in by one of the doors next to the hockey pad. There are a few people putting on skates in the changeroom. There's no soap in the men's washroom.

6pm The ice looks good on both pads. There are a dozen players on the hockey rink but only two skaters, a mother and daughter, on the big leisure pad.

4:45pm The hockey pad was busy as usual with fourteen players on the ice. There were two adults with a group of children on the pleasure side.

The purpose of this visit was to ask staff about maintenance and other issues. The rink operator told CELOS that the rink is cleaned as needed at the discretion of the operator. The number of cleanings in a day varies depending on the weather and the number of permits. A rink operator is on duty Monday-Friday 3-11 and all day Saturday and Sunday. The rink is also cleaned by roving crews. Rink guards are on duty during supervised skates.

CELOS also spoke with a City employee who supervises the employees in several rinks in the area. He said the West Mall gets busier on weekends but "is never packed." Indoor arenas, however, do get crowded during their limited public skating hours. He suggested one way to get more people into rinks would be to change the public skating hours which at the moment are scheduled for times when people are working.

Asked about the City's helmet policy, he said he sometimes has problems enforcing it. People have even swung sticks at him. He said last year's helmet protocol is posted on the City website. This causes confusion and tension. He also talked about differences in practice between Etobicoke and downtown rinks. He mentioned seeing children under 6 at Nathan Phillips Square skating without helmets. He found that odd seeing how the rink is right beside City Hall where the rules are made.

He sometimes get asked if the rink rents out skates, but he didn't think it would be a good idea to do that. He also didn't think serving food was a good idea. He said you have to look at it from the City's point of view. The City is providing a free service and skating is heavily subsidized, he said. 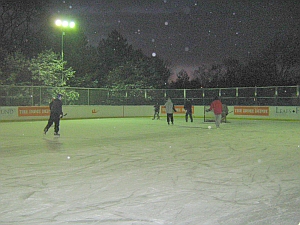 5.30 pm: Eight shinny hockey players and two rink guards (rink guards standing beside the rink). One rink guard goes off for break. The other one is friendly and willing to chat. When asked what his duties are, he says, to make sure that everyone wears a helmet while playing shinny. What if somebody refused? We'd call the police. He says he also works at an indoor arena, supervising pleasure-skaters. His job there is more complicated. He has to make sure kids under six are wearing helmets, and to make sure that those helmets are CSA-approved. He has to make sure that no one takes photographs, or skates backwards. They do allow people to skate with strollers, he says, and they let kids use chairs if they're learning.

The ice is not in good shape -- way too much snow, since it snowed earlier. The rink guard says he tried to get the zamboni driver to clear it better but he ignored the request. Although the pleasure-skating ice is really snowy, a small class of quite young kids is just finishing a learn-to-skate lesson. But they're skating in snow.

Inside the zamboni driver is sitting in the office, having a long chat with a young lady. In the rotunda area, there are about six people, but the whole scene looks rather unfriendly and unconnected -- nobody's talking. 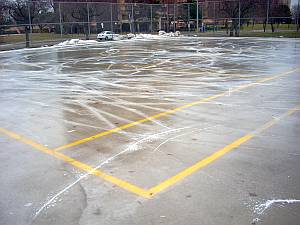 11:15am A maintenance worker is using a hose to flood the hockey pad which had lost all its ice. There is a thin layer of ice on the leisure pad where a man is skating with his young son. The man is from Mississauga. He says they need more outdoor rinks there. He grew up near the West Mall and skated here when he was younger. The rink used to be very busy. 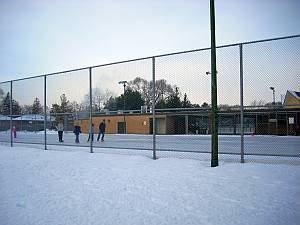 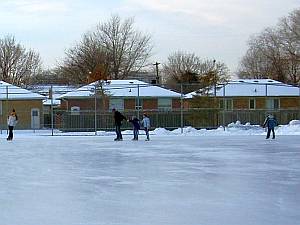 12-1:30pm The West Mall is a double pad rink. The main changeroom is a large octagon. A corridor from the octagon leads to more changerooms. There are benches against the wall around the octagon. There are no benches in the centre of the room. The floor is rubber. The staff office has windows facing onto changeroom and onto both ice pads. The rink schedule in the City West Region Skating Brochure is taped to the wall outside the staff room. The staff also have a few schedules to give out. There also are posters on the wall advertising speed skating at Martingrove rink.

There are a dozen skaters in the changeroom. A shinny player says the helmet rule is enforced and that he was once asked to leave the ice because he wasn't wearing one. There are no vending machines. When asked about food, the shinny player suggests the Quiznos across the street. There is a pay phone on the wall. At the beginning of the CELOS visit, there are a dozen skaters on the leisure pad. A few parents are sitting on the one bench available.

People leave the ice and for a while there are only three skaters. One of the skaters says the rink does get busy sometimes. More skaters arrive and there are again a dozen skaters on the ice as well as two rink guards. The guards don't know if the rink gets busy on the weekend because they only work weekdays. They do say the rink gets busy between 3 and 5pm. Asked if this is because school has let out, the guards say that might be the reason, but they aren't sure. The guards also say that the indoor rinks in Etobicoke are much busier than the outdoor ones.

A man is skating with his son. They live in Mississauga. They later go onto to the hockey pad for shinny. The hockey pad is much busier than the leisure side. At 1:30 there are twenty players on the ice including one girl. The players are all wearing helmets. 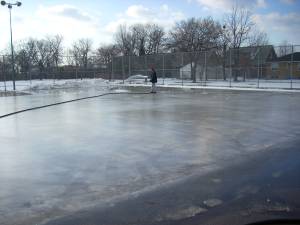 10:15am Rink not open for the season because new boilers are being installed. A city worker is flooding one of the ice pads with a hose. He is friendly and answers questions, but doesn't want pictures taken. He tells the CELOS researcher that 20 to 30 people have already asked him today whether the rink is open.