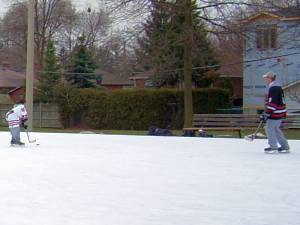 11:30am There are two city workers at the rink. One has brought his lunch. The changerooms are locked. The ice is thick, about 2.5 inches. A woman is watching her daughter skate in one corner. There are 4 shinny players on the ice. They are using a turned over garbage can as a net. 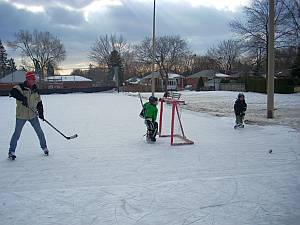 11am The rink has one pad with no boards. The changerooms are locked. There are two adults and three children playing shinny. There is also a teen. The teen says the changerooms are opened if a city worker is present. The ice is snowy and some of the players used shovels to clear a place to play. The teen says the rink is popular and had been packed the day before when it opened. Later that day a CELOS researcher meets the teen again at Queensway rink.