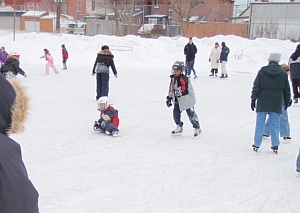 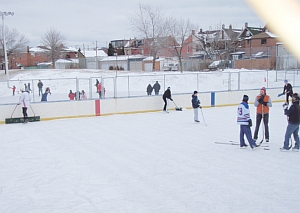 how not to do ice maintenance -- some work and some chat

A fine day, cold but clear, with a LOT of skaters, everyone in a good mood and "Happy New Year"-ing each other.

Ice maintenance: zamboni crew were only scheduled for Etobicoke on New Year's Day. So at Wallace Rink there was manual ice maintenance only (snowshovels and green ice scrapers) done by rec staff and skaters: 11am, 6:30pm.

This was supposed to be the first day of skating lessons, beginning at 10 a.m. At 9.30 a skating teacher arrived. She said there were supposed to be two others, but they never showed. The resurfacing crew hadn't come to the rink yet and so the ice was still snow-covered. The rec staff shoveled out a little section of the ice so that the lessons could begin. A plow-truck showed up during the first lesson, to plow out the rink, but before the rink was done, the driver left the snow removal to an old zamboni, which was very slow. Later on, it turned out that the lessons were cancelled.

Not a good beginning, but hopefully the problems will get fixed.

Aside from that, it was a beautiful day at the rink, with higher attendance and more $2 skate rental than any day so far in this rink season (or maybe ever).

Ice maintenance: 10.30 a.m., 7.30 pm There was lots of snow piled against the boards in the morning, left there by after-hours skaters who must have used benches to move the snow out of the way.

Ice maintenance: 10 am and 5.45 pm. A slower pace this afternoon, now that the holidays are over, and in the evening there was a permit.

There were lots of people on this rink in late afternoon-evening. Wallace Community Centre has a large and lively after-school program, and they come to skate and play shinny hockey more often now that such good skate rentals are available. Then families, and many shinny-playing youth, later.

A couple of trouble-maker youth have been banned from the rink, and one tried to return tonight. These kids are used to the opportunities that come from inconsistency, and they are taken aback when they find out that "banned" really means they can't come to skate unless they have an interview with the supervisor. To get back in, they have to agree to a schedule of community hours where do some actual work, alongside the staff, and show their willingness to stop making trouble.

Some do it, and act better when they have the freedom of the rinks again. Some have to sit out a year until they get more mature -- and they return a year later saying "I'm better now, Miss" -- and they are.

Some just keep getting into worse trouble elsewhere. But not so many.

At 11am both rink pads were covered in snow. City workers were shovelling snow off the cobblestone path that leads from the park to the community centre.

The whole day, Wallace Rink got no ice maintenance at all.

Ice maintenance: 3 pm and 7.15 pm. The ice was pretty snowy by 9 pm. After closing time (9 pm) shinny players are allowed on the "pond" side, and most of them chose that side tonight because it was less snowy than the hockey pad.

The sign with the original rink rules is still up. It was printed up when the change room was still sometimes a scene from the wild west, and if you read the rules (click on the sign to enlarge it), it shows. The idea that there could someday be skate rental and snacks and kids playing checkers, and parents (any that even wanted to come) reading storybooks to their kids between skating times -- it would have seemed utterly unlikely. And yet here it is, in a rink house that has windows now, and civilized behavior, and so many really spunky kids. The same kind of kids as before, only in a much better setting -- and so everyone acts better, too. 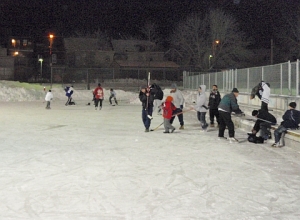 not too dark to play shinny hockey 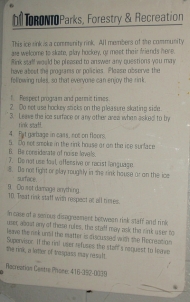 From the Wallace rink co-ordinator:

Today we had a campfire on Saturday 1-3pm (we've cancelled the ones on Sunday) and it went really well with lots of people chatting around the fire. We are working on coordinating it with Tino, Joanne, and staff at the pool due to a smoky smell in the pool - we are making some adjustments week by week and it looks like we can make it work.

Ice maintenance: 10 a.m. and 5 pm, not floods only scrapes. The flying squad say they can't flood on very cold days.

Ice maintenance: before 10 a.m., again at 6. Still no floods, only 10-minute scrapes. Lots of complaints about deep ruts in the ice from lack of flooding.

Ice maintenance: only recorded at 2 pm. Was there another one?

Ice maintenance: at 9 a.m. only. So crowded that rink users and rec staff did a manual scrape at 5.30 (Flying squad truck broke). The rink had to close at 8.30.

Maintenance: 10 am. scrape and flood both sides, 1 pm scrape and flood both sides (didn't need it), 6 pm scrape only -- the flooding pipe was broken, due to be repaired tomorrow and a new zamboni ice-cutting blade also due to be put on. The current blade scraped the ice into odd patterns. Ice was rough as the evening wore on, because of so many skaters and no resurfacing.

Bunching together two scrapes/floods at Wallace during the non-busy times and then doing only one ice maintenance in the busy times does not work. There are alternatives to make it work better. (I have found out today that Dieppe is also getting less than the necessary maintenance -- so Wallace is not the very worst of the double pads, as I thought it was. But compared e.g. to High Park it's a scandal.)

Ice maintenance: 12pm s/f, no evidence of any ice resurfacing earlier, 7:15pm s/f Missed one but had one closer to the busy time -- maybe an improvement?

Ice maintenance: Wallace 9.30 am s/f; 5 pm. Despite the cold they had their campfire.

Ice maintenance: 10am plow on site, did pleasure and hockey side. Stopped, then started again at 1pm, then left at 1;30. still snow on both pads. Continual snow fall made ice unskatable. 7.30 plow arrived, cleared pads, zamboni did a scrape by 8, rink re-opened.

From a letter from Councillor Giambrone to Brenda Patterson, general manager of Parks, Forestry and Recreation, January 29 2009:

''* This rink will be a priority for the flying squad

I request that PFR provide me with a plan in writing as soon as possible for how you are going to resolve the acknowledged deficiencies in current rink maintenance and consistently meet the above notes service levels. Should PFR continue to have difficult throughout the remainder of the rink season regularly meeting these minimum maintenance standards in my ward, I would like to have weekly meetings with senior PFR management staff until the problems are resolved to my satisfaction.

Additionally, I request that PFR begin work immediately on the following steps, identified at today's meeting, as being longer term solutions to all these maintenance problems:

Thank you for your attention to these issues. I look forward to your prompt response.

Ice maintenance: 11.15 am s/f, 8.15 s/f. There was going to be no second resurfacing, because the flying squad zamboni was out of service. But there were such bad grooves in the ice at Wallace that the zamboni was brought up from Dufferin and they did an evening s/f.

Two thirds of the way into the rink season, it is discovered that there is in fact a zamboni allocated for Wallace. It has apparently never been placed there because of concerns about vandalism.

A flying squad staff person said some time ago that the flying squad zamboni is stored up the hill at Giovanni Caboto Rink at night, inside the fence. (see photo below). So what's missing at Wallace is only a fence. Could Parks arrange to rent a "modu-lock"-type fence today, and have it installed at Wallace? There is a perfect spot for it right by the entrance pathway. It's already partially plowed and would need a maximum of an hour of a city plow to prepare the site for the fence. (See photo below, from this morning)

In case there is an objection to not having the fence secured by posts into the ground, may I suggest that such fences are commonly erected around on-site roadwork construction equipment, without puncturing the pavement to anchor them.

Could you find out whether this can be done? 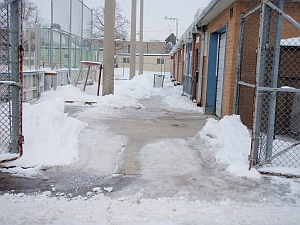 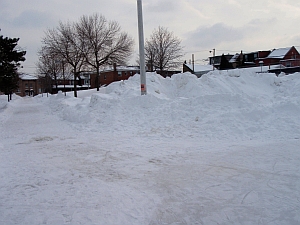 While it would of course be ideal if this could be installed today, we are not able to commit to that at this point. The Councillor has asked Parks to take a close look at your idea for a fence and get back to us as soon as possible. Additionally, he has told them that he doesn't care how they solve this problem (whether it be a tent, or a fence, or an igloo for that matter) as long as they solve it quickly. Once there is more news we will let the community know.

City Councillor Adam Giambrone visited the rink at 5 pm and got a briefing on the ice maintenance problems. He said he would follow up this coming week.