The "Gas Station Islanders" party for their Right2Play fundraiser (sports equipment for kids in war-torn countries). They put on a really classy party, with live bands and a good sound system and food for sale and races and contests on the hockey side. The ice wasn't terrible despite the bright sunshine, and the mood was very friendly. The rink staff had free hot chocolate at the campfire. At the end, when the organizers counted the donations for Right2Play, they were happy: $1200. 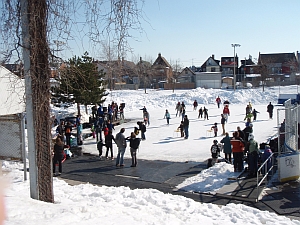 a sunny day for a party 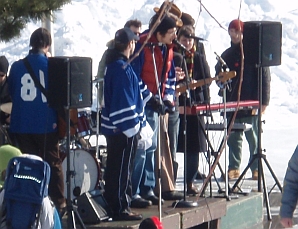 one of the bands 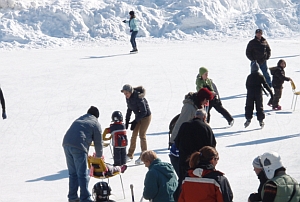 a world of snowy hills 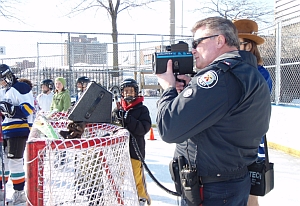 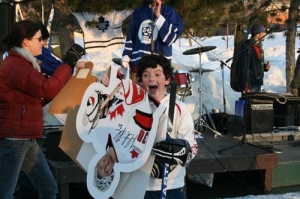 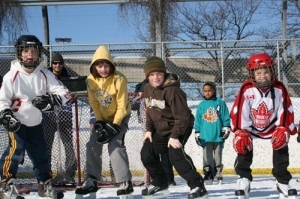 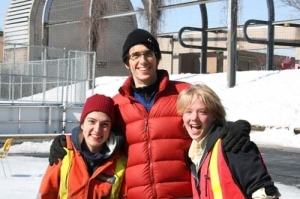 Kevin with staff Sarah and Ginger 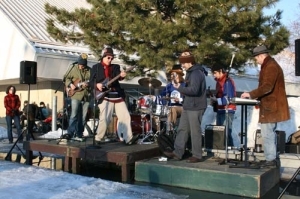 The snowstorm on Wednesday dumped a lot of snow, and today the plows were here. They pushed the snow right up into the campfire area, in effect obliterating it. These Parks department equipment operators are sent down from North Toronto and they are brutes with their machines. God only knows what grudges they were carrying out, damaging trees and picnic tables. They've done damage wherever they're sent, destroying benches and bike rings and whatever gets in the way, leaving deep ruts in the ground.

snow piled on the picnic table 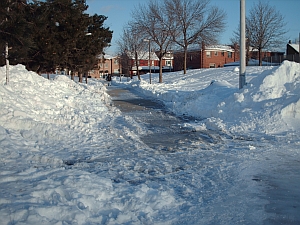 lots of room to move snow onto the opposite hillside 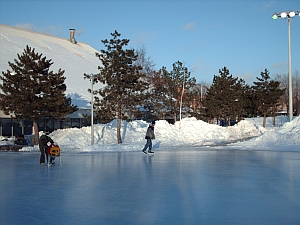 After school all the little kids from the Wallace CC program come down to skate. The rink staff give them free skate rental and free hot chocolate. The place buzzes with their talk and their shenanigans. Meantime the youth are playing chess, and arguing over the moves. They call Sandy (rink staff) over to give a verdict on the right rules of chess.

Outside, up the stairs and around the corner, is the informal "weed zone." No smoking within sight of the kids, is the rule that everyone agrees is just a foundation of civilization.

8 pm Nobody was on the pleasure-skating side, then all of a sudden there were 20 people. One of the fathers pushes his little daughter around the rink on a chair, too fast. Hard to know what to say, since they both seem to enjoy it and probably half the other people who are skating out there are his cousins, and so they're not bothered.

Inside kids are s-lo-w-l-y taking off their skates, kibbitzing around, just comfortable. Sometimes they're pretty silly, but there seems to be a lot of good will here. The Friday evening music has stopped, since nobody much came to it. Also the big need for youth control seems to have vapourized at this point. They skate, they play chess, they act respectful.

10.00pm Full-on shinny game. Kids playing checkers inside, despite it being a school night.

There was a birthday party campfire by the side of the rink and as usual lots of people got to butt in. That's the neighbourly way it's supposed to work. One of the skaters was talking about the recent New Year's Eve skate at the rink. She said she enjoyed it so much and so did her friends. One of them told her, if only I had stayed at the rink, I would have missed all the trouble I got in later!

That's a good thing to remember about rinks, maybe. You can fall down on the ice and break your wrist, but there are worse things beckoning at bars and such places. 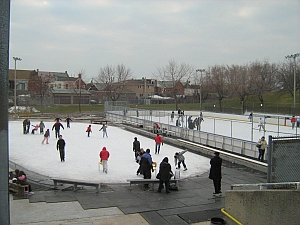 Saturday afternoon at the rink 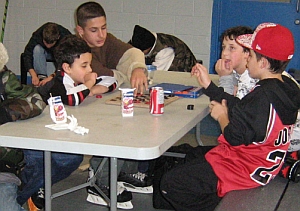 Wallace Rink has been busy every day, inside the change room as well as outside. Today it was like a nice movie -- the change room full of kids eating cookies and mini pizzas, behaviour very good despite the crowds. The younger kids' shinny program worked well, with a local hockey/baseball star to run some drills as well as letting the play. Chris Amaral has a baseball scholarship to an American university, so he gets a lot of respect.

The fellow who does so many drugs and was in prison for robbery, came back again. But he didn't stay long.

A new zamboni driver drove over the rubber mats and sucked a piece into the augur. It had to be taken away for repair.

The big snow from the nighttime stayed on until early afternoon, then the crew cleaned it off, the rink was skateable by 4 pm. 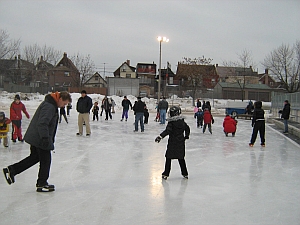 Still no sun, but the Sunday campfire was on and there were a lot of people at the rink. The snack bar made $143 just off hot dogs and hot chocolate at the fire, mini-pizzas and cookies and drinks inside. The small posse of goofs was there too, throwing checker pieces and doing other little "crimes" that we have to take seriously. ("If I see you throwing checker ONE TIME, you're out for a week!") But at the same time there was a very friendly feeling out on the rink. When the 12 and under time came, there were at least 20 kids on the ice, all of the right age group. The kids still argue a bit but they're definitely getting the idea.

Later on the rink staff tried to ask the zamboni driver to not flood the pleasure-skating ice because it's getting too thick (with all that rain). But he wouldn't get near enough to hear because she has a cold and he says he doesn't want to catch it. So he flooded the ice anyway. 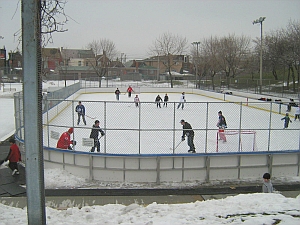 Good ice, and good attendance too. In mid-afternoon the same guy came back who had made trouble on opening day -- a disturbed and angry man who recently got out of prison for robbery and is known to many in the area. This time he disrupted a hockey game and refused to leave the ice. Many people in the neighbourhood are scared of him.

Staff called Corporate Security and they decided that this should involve police. A police woman arrived on her own but by then the man had left. They need to know his name but no one there knew it.

Good ice maintenance and the rink had very good attendance. The rink house is sometimes crowded with kids and youth, many borrowing skates, playing checkers or chess, having snacks. Also lots of sqealing and carrying on -- staff sometimes feel overwhelmed with the "babysitting."

Apparently the "Wallace Boys" are letting it be known that anyone kicked out of the rink for bad behaviour will have to deal with them too. They seem to like the change in the rink, and have sort of cooperated by moving their weed-smoking a bit further away from the main skating area. It's still hard to go by their huddle without coughing, there's so much smoke in the air.

For the last ice cleaning, two operators came in a truck. One went on the zamboni and the other one came in looking for a rink guard to come out. They were busy inside and asked the second zamboni operator to be the "whistle person" outside. He refused, saying it's not his job to do anything more than open the gate. The crippled work ethic of some of the maintenance crew is breathtaking. The long-time zamboni driver in other years would never stoop to such an excuse but he's not driving zambonis this winter. Too bad.

Some snow and rain in the middle of the day. At about 3, a plow truck came, then another one, but the first plow got stuck in a snowbank and got some damage (to the shovel?) Then both trucks left, without doing any work on the hockey side. That side stayed unskateable until about 8 pm, when the plow returned and the zamboni was started up. (Earlier, maintenance staff had reported the zamboni was broken.)

Rec staff shoveled out a wider path leading from the mall parking lot where the mall snowplow had put a mountain of snow right in front of the rink access.

Ice much better after remedial maintenance; rink amazingly crowded, with families, youth, kids with their cousins. This rink is awaking up!

Christmas Day. Quite a few people came to skate but left because the ice had holes in it from before.

It rained a lot until mid-afternoon and nobody came to push off the water, even after the rain stopped. No maintenance at all.

The zamboni got so low in fuel that it ran out before the crew could get it up onto the trailer. So there was no scrape from 3.30 on. In the evening there was a dj (Ricardo the rink guard), to try out the Friday music night. The kids liked it -- but next week we need a campfire.