You are on the [WallaceSkateLending] page of folder [Wallace Emerson Rink]

Many of the skates are showing their age, with rips at the back or blades that have been sharpened down to be pretty short. There's still a lot of demand for skates, by kids who don't have the money to buy their own, and maybe a lot of skaters think they can't have better skates for only $2 a rental. 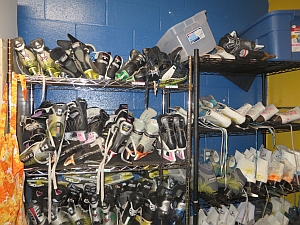 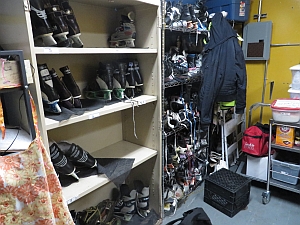 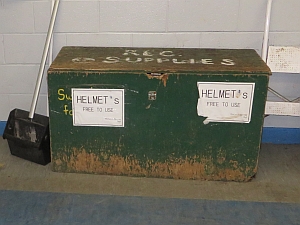 helmets in an unlocked box 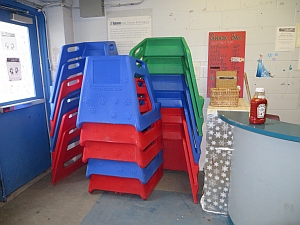 a great supply of skate aids: 21 in total 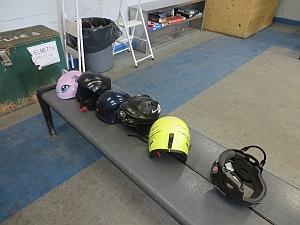 all but one are not CSA, the CSA one has no straps 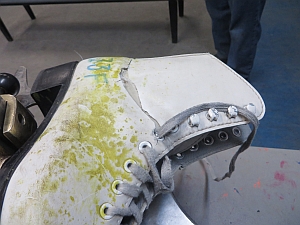 A month after cityrinks sounded the alarm bell about the sorry state of the rental skates, the supervisor has brought in twenty new pairs of skates. He says they're a gift from the NHL Players' Association. On Feb.3 they were spray-painted, and soon they will be sharpened, although how they will be stored is not clear yet.

The odd helmet collection now has a lock on the box, and a sign saying to sign out helmets with staff. However, few staff have been informed of the new locked-box idea, and so it stays unlocked. 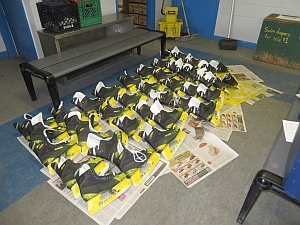 Feb.7: helmet box unlocked as before, most helmets missing

Two pairs of the 20 new pairs of MLSE skates, have disappeared, without any record of them even being lent out: 82WE and 91WE.

2007: The Wallace Rink skate lending program was started in 2007, with overflow skates from Dufferin Rink. In 2010 the NHL players' association donated more skates to Wallace Rink, sticks and gloves as well. Shelves were put up and the skates were lined up in an orderly way.

Rink diary from 2011: The clubhouse kitchen/skate room have finally been set up properly. Ward 18 Councillor Ana Bailao found some funds to get plumbing installed, and the rink staff went to restaurant bankruptcy sales to get sinks and shelves. Then rink friend David Rothberg donated some money to buy other kitchen equipment, and also some more skates for lending out. The staff have been working for a few weeks to get everything together. The kitchen part of the new setup is just about ready for public health inspection. It looks great (and works much better than before). 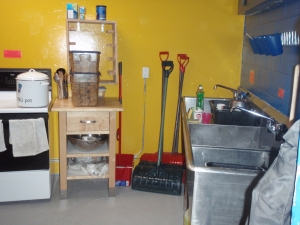 stove and sinks (and snow shovels) 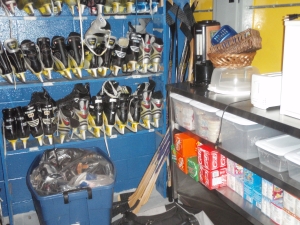 skates are all ready for borrowing

Shelves were extended and moved around to make more room for the loaner skates. But at the same time staffing started to fall apart, schedules became erratic, and the skate room was often filled with kids, a few of whom might help themselves to food or money or and even skates when nobody was looking, or when there was a diversionary fight outside.