You are on the [WallaceNewRink] page of folder [Wallace Emerson Rink]

The proposed new rink at Wallace-Emerson

Nov.14, 2018: About the new rink. Posted on several neighbourhood e-lists, by Michael Monastyrskyj: 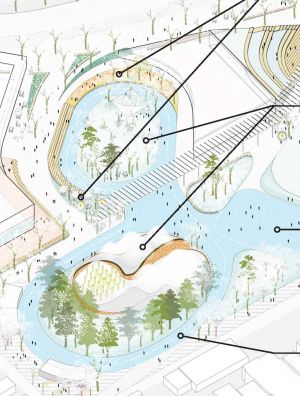 the circular outpouching on the right: "leisure and shinny pad"

Last week I went to an open house about the new community centre the Reimagine Galleria developers want to build to replace the current one.

This oval patch, which could be used for hockey, skate lessons or other special activities would be surrounded on three sides by grass bunkers with an opening to the skating trail. The woman I spoke to said they were thinking about adding "dasher boards" around the oval with some sort of movable barrier to close off the area when it was used for hockey.

A small group of people, especially children, might be able to play on a half-size rink but the 15-20 men who show up every night for adult shinny can't. Neither could the youth who play earlier in the evening.

The woman I spoke to said they were thinking of Dufferin, Wallace and Campbell as a unit. She said the Wallace hockey players could always go to Dufferin. That's not practical because adult shinny at Dufferin routinely attracts 30 players. If all the Wallace players show up at Dufferin, you might have fifty or more adult players.

Someone else I spoke to said the players could go to Campbell rink because Campbell is in his words "dead.". I haven't been to Campbell in a while, but I've asked around. It may depend on the night, but people have told me hockey times at Campbell are busy.

As much as I personally like the idea of a large skating trail, I believe the proposed changes to Wallace rink is unfair to the people who play shinny there now. I wrote this email, because the turnout for the open house was small and I want as many as possible to know what is being proposed.