Frost or Rime Buid-up on both rink pads 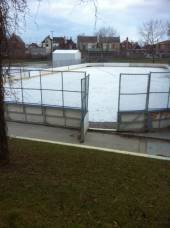 The park staff are working 11pm-7am shifts. That's over night flooding! GREAT!! Still - how many floods are they laying down? With limited staffing, and two or three rinks assigned to each crew - it is probable that only 2 or 3 floods can be laid down each night - not the 5 we think is needed... see here: HowToFixIt.FundamentalsOfIceMaking

The ice on the rink looks solid this morning - like there was at least 3 floods laid down. We noticed tire tracks as well... is it possible that they started flooding with a zamboni already! We think so.

The Rink opens at 9am - good ice! Zamboni staff say they think they flooded at least 35 floods. That's quite a lot in three days, with another rink to attend to - Campbell :) 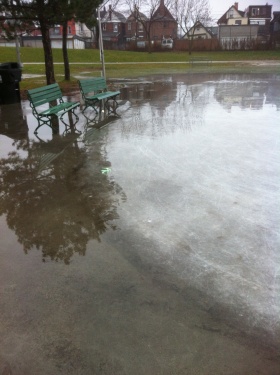 The morning started off wet and rainy. By the afternoon, the pleasure side started to freeze. There's no boards to hold excess water, so it flows right off. That means that there's usually a thin layer which the comresssors can start to freze easily. Meanwhile, the hockey side, with little or no drainage, was still a pool of water. 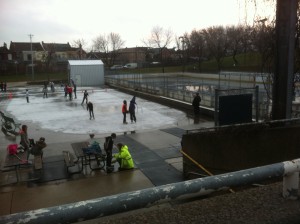 By 3:30, there no rain but also no sign of the maintenance crew, and lots of kids starting to come for skating. (This year, so far, recreation staff have not been given numbers of the crew). The split ice (half shinny, half pleasure skating) was not going to get too busy soon. Recreation staff figured they would ask some of the kids if they would help push water off the hockey side. They pulled snow shovels, two giant squeegees, the giand metal shovel, small squeegees, brooms and got to work 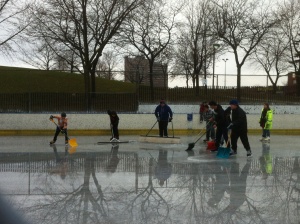 recreation staff helping youth get organized in a line 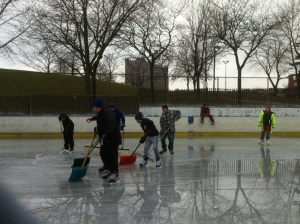 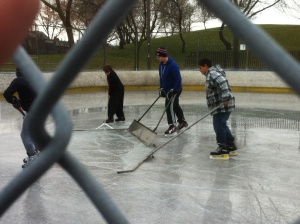 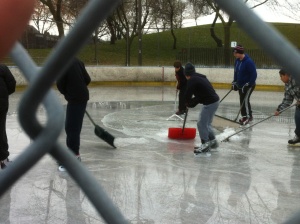 pushing water out the gates

The ice is in good shape this morning but temperatures will will cause a little bit of melting at the surface of the ice, protecting established ice below. 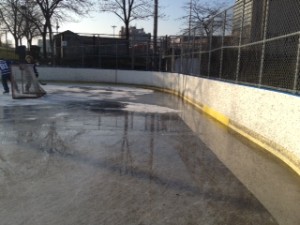 hockey side develops thing layer of melted ice on top 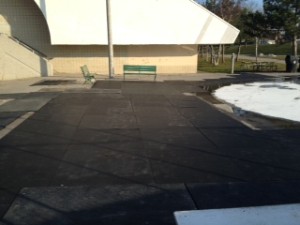 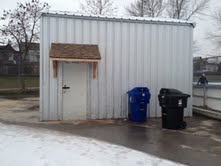 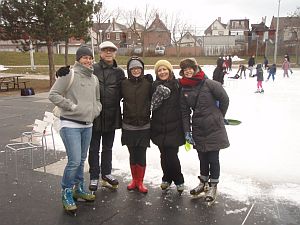 The rink house is crammed with people -- everyone seemingly in a happy mood -- maybe a bit excited about the coming snowstorm.

The rink is hugely crowded but only one staff has been scheduled to work. Not nearly enough. Skates are getting dull but not enough staff to take care of them.

There was no morning ice maintenance. Recreation staff called to find out when the Zamboni driver would be coming. The crew arrived at 1pm

It was a warm winter day, 14 degrees Celsius. There was a lot of water on the rink, but because it was cloudy the ice underneath was solid. In the morning a group of French students skated in the rain, one of the students carrying an umbrella. In the afternoon another group from the same school came. At 3pm the ice had still not received any maintenance meaning both student groups had to skate on a rink covered in water.