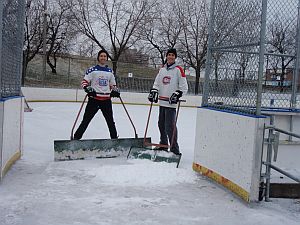 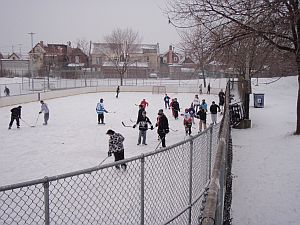 3pm: too much snow to move the puck!

Despite all the snow, there was a lively, sociable scene, also inside the clubhouse -- people chatting, drinking hot chocolate, playing chess. Some parents said they always bring their families to Wallace Rink now, because Dufferin Rink is just too crowded. The only problem, they said, is that then "you don't see anybody," i.e. you don't run into as many of your neighbours.

But eventually the neighbours will go up to Wallace too...

A snowy day until late afternoon.

Ice maintenance: pre10am, 4pm manual scrape of the pleasure-skating side plus half of the shinny hockey side (players decided they'd rather play on half the ice than scrape the rest) 6pm scrape and flood both sides.

In other words, after an hour and a half of hard work, the flying squad arrived, without notification ahead of time. That has to change.

The ice conditions at Wallace suck. Especially for pleasure skaters who always seem to get the chewed up end of day ice. I am totally aware of the lack of a melter on site but on January 2and it seemed to me that the Zamboni crew got on and off the ice in under 20 minutes which is just not possible if one is going to provide a good (not great ice surface). I didnt mind that it happened in the middle of the pleasure skate but it was hardly worth the delay if they are not going to do a good job. I dont know why there is no schedule that they can keep; I have seen at other rinks that the Zamboni always comes out at a scheduled time.

Ice maintenance: 12:30pm scrape, then the zamboni sat there for a time, then it was picked up to be taken away; 6:45pm scrape and flood.

There was a meeting at Wallace Rink in the morning, of four of the organizers of winter events at Dufferin and Wallace Rinks. They're not very happy. One of them wrote to her group afterwards:

The annual Icycles (Bikes on Ice), the Gas Station Islanders' Family Skate, The Women of Winter Shinny Tournament, the GTHLA New Years Eve skating party, etc., are the best of volunteer community and parks collaboration but now the City is insisting on treating these as outside events and requiring permits which will make many, if not all, prohibitive in cost and time.

Two of the organizers of the Family Skate/band concert/UNESCO fundraiser came to skate and play shinny hockey. They've been asked to fill out all the paperwork so that it becomes clearer to the City management why their activities can't fit into the standard "special-event" mold, with insurance and permit fees and commercial sponsorship and all the usual special-event razmatazz. There does seem to be some chance that this won't have to develop into a stand-off -- that the managers down at city hall will be able to "get it." 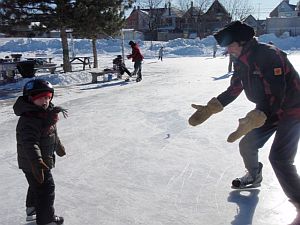 meeting over - Don Kerr and his son at Wallace Rink

E-mail to Brenda Patterson, the general manager of Parks, Forestry and Recreation, from Don Kerr and Kevin Lacroix of the "Gas Station Islanders" January 8 2010

The Gas Station Islanders are a group of community members who wish to make use of a public park in an organized manner one afternoon of the year.

We are a recreational hockey team who simply want to pool our skills... bake cookies, play music, teach kids to skate... and bring our families, friends, neighbours outside to be warmed on a cold winter day. Over the last two years, we have had nothing but positive response from the staff and the neighbourhood, and we've raised over $2,000 for charity. This year we plan to donate all proceeds to UNICEF.

OUR EFFORTS HAVE BEEN ON BEHALF OF THE COMMUNITY AND THE RINK. WE DO NOT DEPRIVE ANYONE OF ITS USE DURING THE EVENT. IN FACT, IN THE PAST, IT HAS BEEN CLEAR THAT WE BRING MORE PEOPLE FROM AROUND THE AREA TO THE PARK THAN WOULD OTHERWISE GO ON ANY GIVEN DAY. IN THIS RESPECT, IT IS A PARK/RINK EVENT THAT HAPPENS WITH OUR SUPPORT... NOT THE OTHER WAY AROUND.

Please let us continue this friendly use of our local park without adding fees or paperwork to an otherwise joyful endeavour.

Ice maintenance: pre-10am. At 5pm there were many complaints by skaters, the ice was very bad. Staff said they were told that the flying squad was at Christie rink and would then do Campbell, then Wallace. They did Campbell at 5.45 pm but didn't come to Wallace. They drove past Wallace at 7.20, and didn't return until 7.55pm. Then they scraped the hockey pad 4 times, pleasure pad once. There was a permit at 8.30 -- the regular program didn't count enough to do the ice. This is SO frustrating. 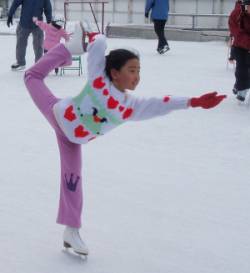 The rink was busy and friendly as usual. A little girl was doing figures in between the other skaters, with her dad watching (and lots of other people enjoying her skating too). It turns out she got her start at the outdoor rink skating lessons with rec staff Mayssan Shuja Uddin. Ice maintenance: 9am scrape, 11:45am long scrape, 5:40pm s/f

Ice maintenance: 12 noon s/f, 5.45pm scrape only, although a flood was requested by rink users -- apparently the zamboni drivers said it was too warm to do the evening flood (temp: 1 celsius). They took a mere 13 minutes total to scrape the whole rink (both pads).

Ice maintenance: pre 10am s/f, then nothing until 8 pm right before the permit, at which point there was a particularly thorough resurfacing of the hockey pad.

Ice maintenance: 9ams/f, 1:45pm scrape - written in log book "driver was being assessed by another city staff" while he did the scrape 6:15pm scrape both (No flood)

to follow up on our phone conversation this afternoon -- from Jan 1 to Jan 25, Wallace Rink had the following pattern of irregularly-timed ice maintenance:

2 days with one visit

As a double pad rink, it ought to have a minimum of 4 visits a day. What is preventing the city from putting a rented zamboni on-site beginning this week and parking it at Boothe Ave during the night-times?

Ice maintenance: not by 10am, 11:50am zamboni on site, no maintenance, 1pm operator in truck on site, 1:20pm scrape both, zamboni still on site, 3:45pm flying squad crew scrape hockey pad quickly - they notified rec staff before beginning scrape, 6:30-7pm s/f both pads, took zamboni away with them at 7 pm

Numbers sample, 2:20pm: Shinny hockey 22 (2 helmets); pleasure-skating 27, 25 inside, 27 more outside around the campfire and watching the band.

Ice maintenance: no maintenance in am., 11.45 pm scrape only hockey side because of jam in machine, Zamboni left on site, 3pm Zamboni removed, 6.15 scrape and flood