11am The ice has been cleared of the snow that fell last night and is in good shape. There are 3 adult men and five children skating at the rink. No one is playing hockey. One of the fathers comments that the ice is "pretty good, actually." None of the skaters was here when the ice was cleaned, but they say it must have been earlier in the morning.

7:15-8pm There are 19 people at the rink when CELOS arrives. Eleven are on skates. The rest are parents and other family who have come along with the skaters.

The ice is hard and smooth, but very snowy. A couple of the hockey players wonder why the Zamboni doesn't come more often.

During a previous CELOS daytime visit, some young hockey players complained that the lights aren't bright enough at night. However, on another visit two older players disagreed, saying that while the lights didn't reach all the corners, they were bright enough. This is CELOS' first night-time visit to Valleyfield. The lights could be a little brighter, but they are adequate. As the older players said, the corners are a little dark, but the light does cover most of the ice surface. Some of the people know each other and there is a lot of friendly conversation. The skaters are of all ages. There are several parents with young children. Some of the parents are on skates, some are not. The rink is unsupervised so there is no one here to tell the parents without skates to stay off the ice. Also, there is no one here to make skaters wear helmets. Some children and hockey players do wear helmets, but many don't.

Five boys decide to play a game of shinny. They choose sides by putting their sticks in the middle of the ice and having one boy toss the sticks to either side of the rink. The shinny game dominates most of the ice, but there is still room for other hockey players as well as pleasure skating. During the 45 minutes that CELOS is at the rink, people are coming and going.

2pm There are 13 hockey players on the ice, mostly teenagers who appear to be 14-15 years old. Most of the ice surface is being used for a fast-paced game of shinny. At one end of the rink, three hockey players ares playing a separate game. On another side of the rink a father is playing hockey with his young boy.

During a previous CELOS visit, some young hockey players complained that the lights aren't bright enough at night. The players said half the rink is covered in darkness. On this visit, CELOS asked two older hockey players about this. The older players said the lights are bright enough. They said the lights don't quite reach all the corners, but do cover most of the ice. The older players don't see this as a problem.

10:30am There are sixteen people at the rink: 10 hockey players, 3 pleasure skaters and 3 moms sitting on the bleachers by the side of the rink. The moms have brought their own food to the rink. The ice is in good shape.

3:30pm It is drizzling and most of the ice is covered with a thin layer of wet snow. Four boys have brought shovels and have cleared just enough ice so that they can play hockey. The boys say the City cleans the ice once each morning Monday-Friday but only once each weekend. The boys complain about the poor quality of the ice.

They also complain that there aren't any mats at the side of the rink which is very slippery. The puck often slides off the rink surface onto the side and the boys have trouble walking on their skates over the rough ice at the side. The boys also complain that the two stairways that lead down to the rink are often slippery because they're not salted. Today one side of each stairway is reasonably clean meaning it's possible to go down the steps single-file.

The boys say when the rink is busy there can be as many as three shinny games going on at once. Pleasure skaters are forced to go along the edge of the rink. The older shinny players take over the centre of the ice, while the younger players play separate games at either end.

Asked how what they would do to improve the rink if they could, the boys enthusiastically offer suggestions. First they want boards and nets. (Shinny players at Queensway, another Etobicoke 'minor' rink, said the same thing.) The boys say they have seen nets stored in the refrigeration building next to the rink. The rink is on a tennis court and there are fences at either end but not on the side. The boys point to holes at the bottom of the fences where they lose their pucks.

The boys also want the changerooms open so they can put on their skates inside like people do at Westway, just down the street. One of the boys remembers when he came to the rink years ago with the Beaver Scouts they were able to use the changeroom. He says his parents remember when the changerooms were always open. One of the boys shouts out that the rink needs washrooms. The other boys agree. They live too far away to go home so they relieve themselves in the bushes.

Another boy says they want hot chocolate. "Come on," he says, "we're kids we need something to drink." Asked if there is someplace they can eat, they say there's a Pizza Hut down the road, but it's not very close.

5:10pm The rink is completed buried in snow. A few minutes later, the rink operator at Westway a short walk down the street says that in Etobicoke the priority after a snowstorm are the larger rinks (the so-called 'majors'). Valleyfield is a 'minor,' i.e. an ice pad without boards, nets or changerooms. The operator at Westway said a roving crew was out cleaning the minors. However, it's worth noting that 'minor' rinks are sometimes busier than the 'majors,' partly because there are no permits and the ice is always available and partly because there are fewer rules. Players at Rivercrest, another 'minor' rink, said they played there because they didn't have to wear a helmet.

2:15pm The ice is in good shape. There are six pleasure skaters. An older man who is there with a few young girls says that about 4pm the rink will be filled with shinny players. 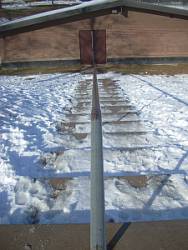 Steps covered in snow and ice

1pm This is a single pad rink with no nets or boards. The changerooms are locked. The ice pad is located at the bottom of a hill. There is snow and ice on the steps leading down to the rink from the parking lot, but they have been salted a little. There are 17 shinny players on the ice. It is a fast-paced game. The players are good skaters and have obviously had a lot of practice. One of them is a girl. Two men are standing on the side watching the game. One of them says Valleyfield is "a nice little spot, always busy." The other man says he sees boys playing shinny here in the morning when he's on his way to work. The rink was open a few days earlier than Dec 8. 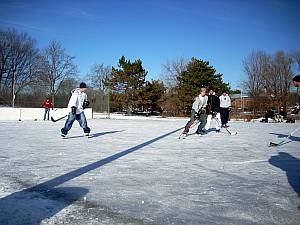 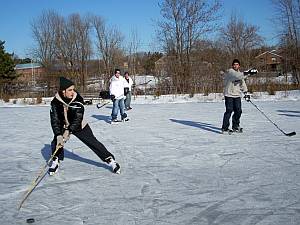