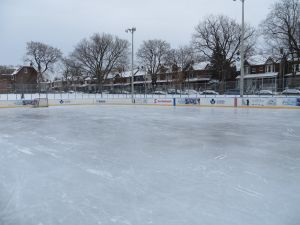 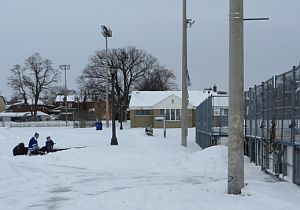 changeroom is locked, but there's a platform to sit on outside

This rink was one of the 11 that was reopened despite its schedule closing. A man and his son were there from Stouffville, very happy that the rink is open.

It is 9:33AM on December 15th 2013 and I have just returned from Trinity Bellwoods outdoor skating rink with my son after planning to go for our regular sunday skate.

Much to my surprise there were no Parks and Rec workers to be found, the rink unopened and no one arriving to open it as scheduled. We waited 15 more minutes in the cold before returning home disappointed.

Can I know why the rink was not opened? It is after all winter and just because it snows, which often does happen in the winter is no reason to not bother opening up the skating rink and ruin plans for parents and children.