3:30 pm: The ice is closed awaiting more flooding - the building attendant told me that they'd had it a trial patch of it open earlier in the day but it got cracks, so the maintenance guys closed it & were due to flood it again after sundown.

He said it should be open tomorrow unless the forecasted warm weather and rain is too much. A few kids were shooting a puck on the grass next to the rink, they'd come to skate. A family came to check it out as well, the two kids walked onto it. The bulletin board had the schedule and a sign advertising a 'skate with Santa' event on Dec 18. 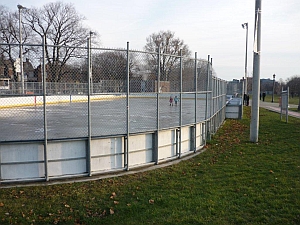 Dec.3, kids sliding with shoes, ice too thin to skate

7:05 pm: It's raining, the ice is locked up with a sign saying 'closed due to poor ice, do not skate'. The change room was open yesterday when I went and the building attendant was there, although it's closed now.

At 2pm the city website said that Trinity was closed. But it was not closed -- the ice was good (as reported by a skater). No surprise -- all the rain yesterday froze up overnight, of course. 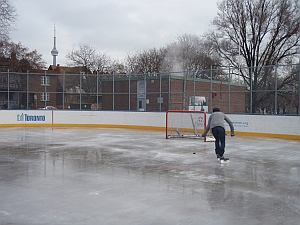 good ice after the rain yesterday 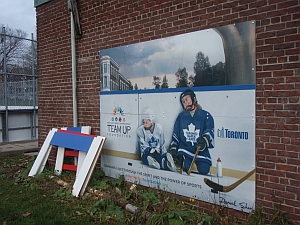 rather odd mural left over from MLSE party in 2010

Skaters reported that Trinity Rink was locked on Christmas even though the city's website said the ice was accessible.