At 2 pm the Tech services staff were in the compressor room, working on the machinery. The rink hadn't been started up but the mats were all laid out, ready for skaters. 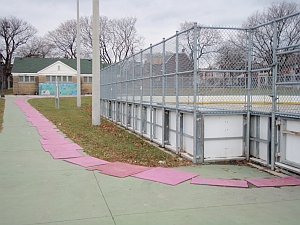 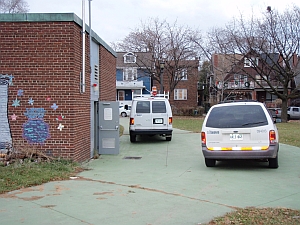 Trinity Rink was just being started. Two staff were out there with the hoses at 2.30 pm, but the rink was still mostly cement. The foreperson was there too. He looked tired. He said the rink had had compressor problems which had just been fixed. The up-to-date bulletin board had two notices telling of the delay, for technical reasons, and saying the rink would open on Dec.8. The second notice was from the Friends of Trinity Bellwoods, who had planned an opening party with hot chocolate - now postponed to the middle of December. Some of the park friends are planning to take turns serving Fair Trade hot chocolate for a couple of hours every Sunday - a great way to get to know a rink. This group has a wikipaedia entry too, here. 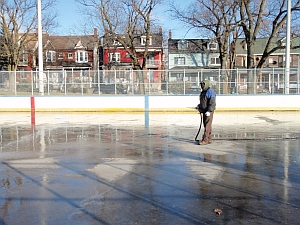 hosing the rink to lay down water 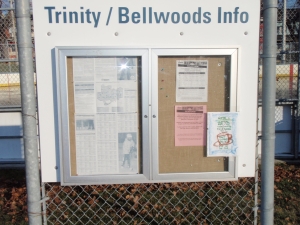 bulletin board with up-to-date information
Click on image to enlarge it.

Trinity Rink opened for the season.

8.50 pm: there were 28 shinny players on the rink, with one puck, plus another 10 people in the boxes, and four more just pulling up in a car. Some of the skaters said that there is no fixed one-puck rule, and that often there are just as many people shooting pucks around as at Dufferin Rink. But on this night the focus was impressive.

The rink building is very clean but the toilets look like they needed replacing several years ago.

E-mail from rink user Gordon Smith: "I find the staff there, very pleasant and helpful."

There was 3 inches of snow overnight. The ice maintenance crew did not arrive to clear off the snow until 8.30 pm. They finished at 9.30 pm, so a whole day of the rink was lost.

Cityrinks.ca posters announcing the website (put up mid-week) were gone off the two bulletin boards. The Rink program staff person said that so far Trinity has been getting only once a day maintenance.

We are constantly reviewing and revising our protocols and procedures to ensure the continuous improvement of operations and service to all residents. The start-up this season has gone very well, with only a few minor disruptions.....Staff is pleased with the availability and assignment of equipment and believes it is more than sufficient to support the needs program across the city.

Trinity Rink was was ploughed out by three trucks and resurfaced with a zamboni between 5 and 7 pm. At 9 pm there was new snow on it (next storm) but three skaters had pushed some of the snow to the sides with shovels, and were playing shinny.

The rink program staff person said that Trinity has been getting wonderful maintenance this year, often three times a day. He said that in other years they always got the last maintenance, the short end of the stick, but this year it's different.

He also said that unlike in other years, people have been calling the rink and asking about skating times etc. That's because the Trinity Bellwoods Community Centre has been giving out the rink number to people who call for information -- another first. (Rinks numbers have usually been unlisted.)

Snow followed by rain: no maintenance.

No maintenance, not skateable.

The plow came in the early afternoon, the zamboni after that -- skateable by about 4 pm (report from rink neighbor).

Off and on rain-showers especially in the morning. No ice maintenance at all.

An early-morning rain shower put some more water on the ice. Then the rain stopped, but there was no ice maintenance at all. At 3 pm, pleasure-skating time began. The three hockey players who were on the ice were asked to get off, so they left. A father and his little daughter stayed. The zamboni arrived on its trailer, and one of the two zamboni guys went into the rink house. He came back out shortly and got back in the truck, and they left without doing any maintenance. 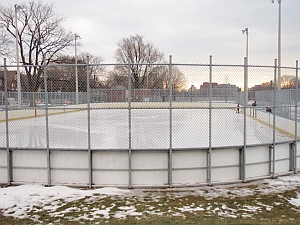 ice pretty good, but big puddle at the end 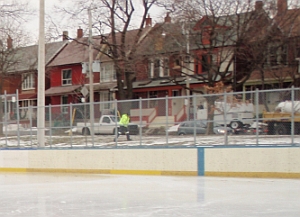 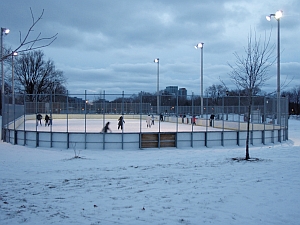 There were pleasure skaters on the ice and two rink guards in the building. The ice was rather snowy, since there had been no ice maintenance since yesterday, but the rink guards said they are not allowed to use shovels to clear snow off the ice. They said there used to be those big green rink scrapers at Trinity Rink,. to clear the snow off the ice, but they had been removed so that no one would use them.

From the Karen MacKenna for the Friends of Trinity Bellwoods:

Well, after some false starts this inaugural season - sincere apologies - looks like today the weather (no rain!) is smiling on us. By all accounts the hot choco will be served up between 3pm and 5pm today at the rink. All skaters and sledders welcome!

Please, BYO Mugs if you can. We will supply eco cups if you forget.

I will host the initial Sunday and Patricia Arseneau has agreed to share alternate Sundays with me. But we welcome and encourage any volunteers who would like to take on a shift during the 12 week season. Please contact me at[email protected] you are interested).

Patricia Arseneau was serving up the hot chocolate (organic Camino, and free!)and there were plenty of people interested. But just as she poured out the first cup, the freezing rain began. However, there were still skaters on the ice. Soon this bad weather luck has to turn. 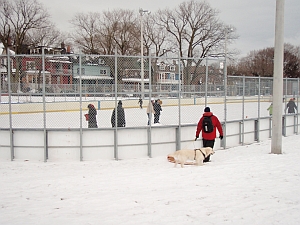 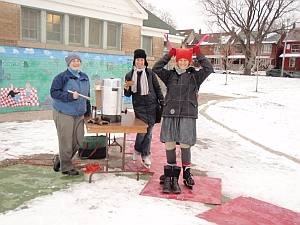 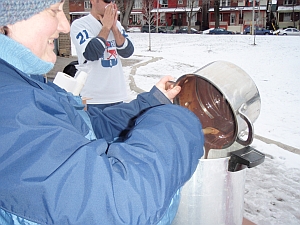 Patricia mixes it in 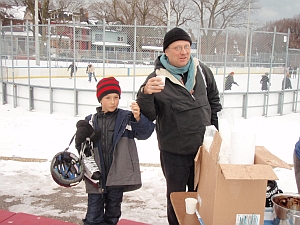 At 7.45 pm the rink is open but very rough. There are hockey players on the ice even though it's pleasure-skating time.

At 9.00 pm there was a very fast women's shinny game -- there were only nine players, though, and it looked like they might run out of wind playing at that pace, with no subs. 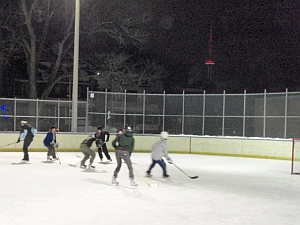 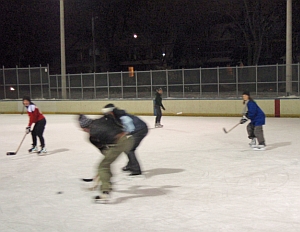 so fast, and no subs -- how long can they last?

The building attendant said that there's a women's instructional shinny class before that game, which today had six people.

The cityrinks.ca poster that had been tacked to the bulletin board inside the rink change area has been replaced by a city outdoor skating schedule. The supervisor for this rink is quite certain that the cityrinks poster is unauthorized, and that only authorized notices must be put up on city property, i.e. bulletin boards at public rinks.