Sunnydale 7:00pm: There were a couple of shinny players and a couple of pleasure skaters, ice was average shape, hadn't been cut in a few hours, but decent, we didn't stay long.

Last Friday I was talking to Amin Massoudi, Councillor Doug Ford's assistant, about a skating and campfire event we're hoping to help with, at Sunnydale Rink, on Friday February 18 (a PA day). Amin was enthusiastic, and I hope you will be too. (I'm contacting you because 311 told us that you're the Recreation supervisor for the Sunnydale Rink area.)

Dufferin and Wallace rinks often get groups of kids/youth coming from your area, or from Scarborough. They come all that way by TTC because many of the kids don't have skates, and Dufferin and Wallace each have a big skate-loan collection (from the NHL Players' Association). During the Christmas holidays, a group of about 40 great kids from the "San Romanoway Revitalization Association" came down from Jane/Finch. They had such a good time that we offered to come to a rink nearer to them the next time, bringing skates, helmets, sticks and gloves (some want to try shinny hockey), as well as hot chocolate and marshmallows to toast over a campfire.

Campfires are a great Canadian winter experience, and some rinks have been reviving this old Parks and Rec activity (which used to be very common about twenty years ago). Here's a link to the Greenwood Park website, showing a recent rink-side campfire: http://www.greenwood.parkcommons.ca/wiki/wiki.php?n=Campfire.December4-2010.

I'm hoping you can help get permission for Sunnydale Rink to have a campfire. We've got some Trillium funding to pay for the skate transport and lending, and for the hot chocolate, wood, extra campfire supervision etc. So this is not an extra Rec cost.

I've attached the PFR campfire policy. We'd like to have this be a collaboration with Recreation, in other words, a program rather than a permit -- the same way as is the case at Greenwood, Wallace, Dufferin, Rennie, etc. I've cc'd Terry on here too, hoping that he could involve a few of the regular rink staff, for them to learn the routines and be part of the fun. Since it's a PA day, we can bring extra skates for other neighbourhood kids who don't have any (and extra hot chocolate and marshmallows!).

The CELOS crew arrived around 1 pm, with skates, wood for the campfire, hot chocolate and marshmallows. The ice had been resurfaced and looked good.

The Parks staff had set up a nice campfire site with plenty of thick heavy duty mats and no benches but 4 good-looking picnic tables. The park supervisor had told us that there were no movable benches in the Etobicoke parks, that they were all bolted down.

There was a bit of rearranging so skaters would be able to walk up to the campfire to roast their marshmallows, but also sit close by to keep warm. Two rink staff and the rink coordinator and helped unload the supplies.

Councillor Rob Ford and two recreation supervisors arrived just as the campfire was started -- Terry Hickenbottom (in charge or Etobicoke rink program staff) and Prince Agbo (from the Recreation's newcomer program). Prince stepped right in to serve hot chocolate. He had also brought a boom box and extension cord, so there was a top 40's radio station to listen to. There weren't that many people, the peak being around 40 skaters during hour-and-a-half pleasure skating time. The rink coordinator had explained that he would be willing to help in anyway, but that his main duty was to be a second rink guard in case they reach capacity on the ice. However, there was never near capacity. The coordinator got trained on the campfire program, just in case help was needed there.

It turned out that there are no taps (apart from the washroom sink taps) where staff could fill water to make hot chocolate. The only tap in the garage had a hose attached to it (public health rules say that you can't drink water from a hose). Luckily it wasn't busy, so the thermos of warm water that CELOS had brought was enough, just warmed up on the trivet. Kids were roasting marshmallows. Music was playing, most of the kids got to have 5 or 6 marshmallows and many refills of hot chocolate. The small numbers of people made the campfire feel like a small, friendly skating party. There was only one poster up in the rink changeroom about the party, and there were only 3 people who borrowed skates. This was evidently because the short time frame from approval meant that hardly any advertising had been done.

But it was a great dress rehearsal for next rink season, if Councillor Ford wants to sponsor another skating party -- this time with plenty of advertising so kids all over the neighbourhood will know they can come even if they don't have their own skates. With the support of the Sunnydale rink staff, it ought to be just as successful as the other Family Day rink parties elsewhere in the city. 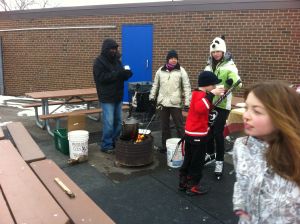 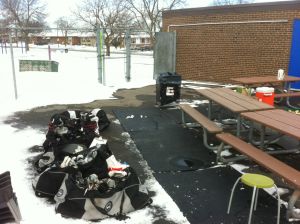 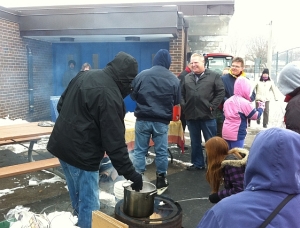 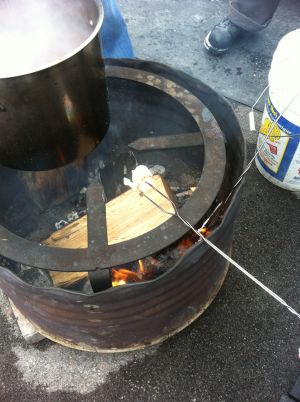 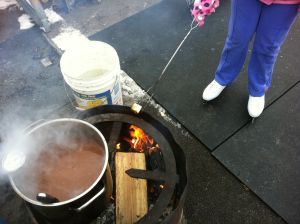 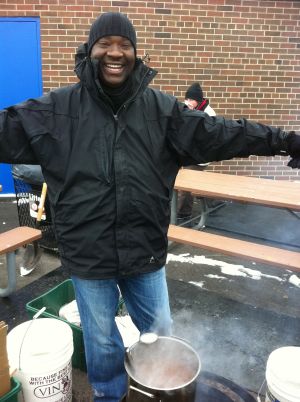 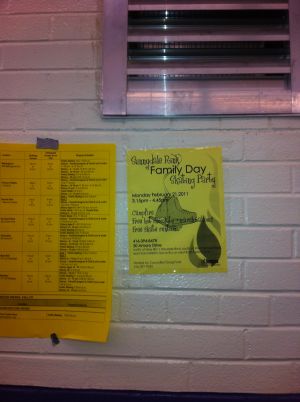 just one poster was put up 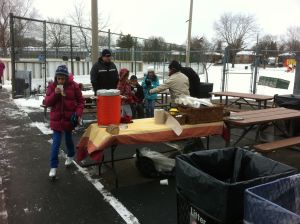 not many kids had heard about it 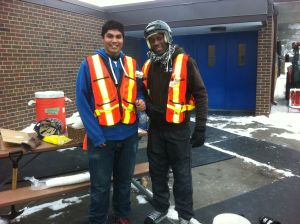