3pm The rink is locked, but you can see through the chainlink fence that the ice is covered in snow. After a few minutes, the rink operator arrives and unlocks the door. He says he will start cleaning the snow off the ice. The rink has a large snowblower. The operator says having only one 3-11pm shift Monday-Friday makes it harder to clean the rink after a snowstorm. Asked about the roving crew that cleans rinks weekdays when there's no rink operator, he says that some live outside the City and don't show up on snowy days. However, there are tire tracks on the ice suggesting somebody was trying to clean it earlier. Later that afternoon, the rink operator at Westway says there was some kind of equipment problem at Sunnydale. However, he didn't know the details. 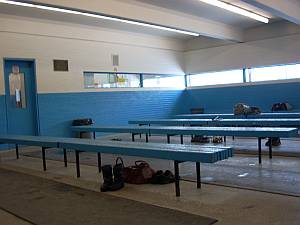 The spacious changeroom is empty
Click on picture to enlarge it.

Rink staff say the rink is quiet because it is in an out of the way place, but there are houses all around and Rivercrest, a much smaller rink only fifteen minutes away is packed with shinny players. CELOS wasn't at Sunnydale for public shinny, but players at Rivercrest said they didn't like Sunnydale because there are "too many rules" and because they have to wear a helmet. Read the February 3 Rivercrest diary entry. The players at Rivercrest also complained that when they call Sunnydale to find out if the ice is available, no one answers the phone. The same players said the rink's information line 338-RINK doesn't have useful information about Sunnydale and they no longer bother to call it.

A hand-written sign on the door of the rink office says shinny players must wear a helmet and the rink guard confirms that the rule is enforced. The guard says he makes one exception. During parent-child shinny he will allow a parent without a helmet to stay if the child is wearing one.

The rink guard, who was friendly and willing to answer questions about the rink, also enforces the City's photography policy. He told the CELOS researcher it was ok to take pictures of the rink itself but not of any of the skaters. Asked if it would be ok to take pictures of people who had been asked first, the guard hesitated, but said it would be ok provided the people were told what the pictures were being used for. 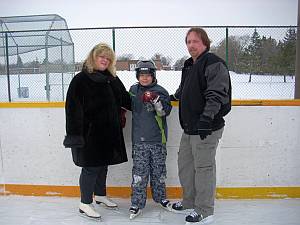 This family came for the public skate.
Click on picture to enlarge it.

The rink guard says there are fewer skaters this year because a lot of people were confused by the City's announcement (later reversed) that the rinks wouldn't open in December. The rink operator says an operator is on duty 3-11pm weekdays while there are two shifts 7am-3pm and 3-11pm on weekends. He says he scrapes the ice when needed which is usually 3-4 times a shift. He says he usually scrapes the ice after public skates and at 10pm. If there are people on the ice at 10 he asks them to leave so that he can clean the ice, but by 10 the rink is usually empty. The CELOS researcher skated for twenty minutes. The ice was soft and snowy.

The rink gates are locked at 11pm. If there is no permit, the rink operator will allow people to use the ice outside the public skating and shinny times stated in the Etobicoke rink guide. A copy of the rink guide schedule is posted outside the staff room which is marked "Office." The staff room has windows that look over the changeroom as well as the ice surface. Inside there is a desk, chairs and a couch.

There are some rubber mats on the floor of the changeroom, but they don't cover the whole floor. There are mats outside leading to the ice, but none in the washrooms.