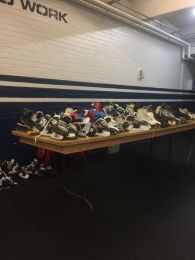 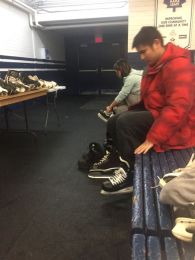 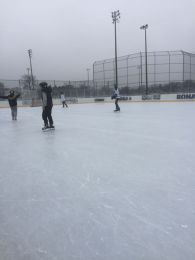 The weather was grey, intermittent rain, quite miserable, like Halifax in December.

The rink was lightly used. Ice surface looked excellent. The two rink attendants said that a big church group with their own skates had just left.

Sunnydale has its own tractor with snowblower and Zamboni. Zamboni crew were proud of the fact that they have new boards and new glass. The Virgin Fm radio station was blasting out from the rink speakers.

There was no signage anywhere on the rink or in the building about the skate exchange.

The skate exchanges was set up on a set of tables. There were about 6 staff there/ all the skates that were not taken at previous exchanges are still showing up. There were more adult skates than at Mel Lastman. A small number of people were sorting through and trying skates. There was face painting, hot chocolate, and popcorn -- friendly atmosphere. 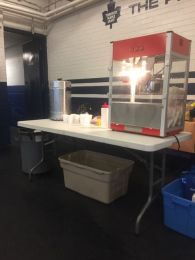 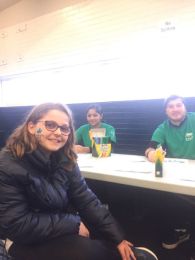 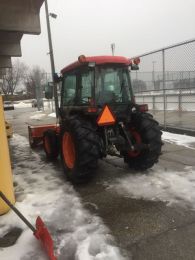 The rink has been marked as open until yesterday and then it was listed as "snow removal in progress" (with over 25 cm of snow). It was the first of the Etobicoke rinks to be listed as open this morning.

Marked as "open" again for the first time in six days.

Our reasons:
* people love to borrow skates: newcomers, school classes, kids and youth who grew out of their skates
* we have 110 pairs of skates, 20 hockey sticks, 20 helmets to donate
* this kind of program has been done by city staff for 12 years at Dufferin Rink, 9 years at Wallace and Campbell -- lots of experienced staff, each one teach one
* staff often have time on their hands to lend skates and also to maintain skates
* the city has insurance that can cover this (the city is self-insured under $5 million anyway), but skate lending programs are rarely threatened with a claim if they do responsible skate maintenance.

No rink visits, no skater reports

There were a few skaters just coming off. The rink guard said that there were no skaters on either of his previous two daytime shifts -- the only person who came was a guy looking for a hat he had lost.

The rink had apparently gone down to cement along the boards, but the zamboni driver spent a long time flooding and scraping to get the ice back. It was back, but with a lot of bubbles and shell ice. 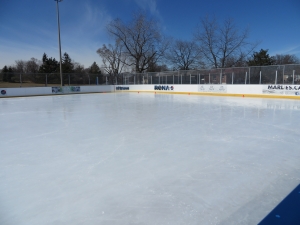 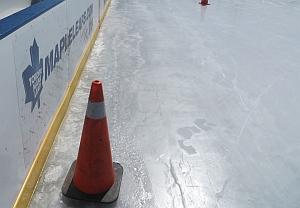 The rink re-opened today, although with fairly thin ice. The old boards are back up, so is the plexiglass. The glass has puck marks everywhere, so it always looks as though feathers are flying through the air. 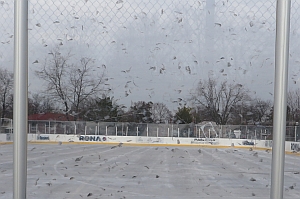 boards are back up 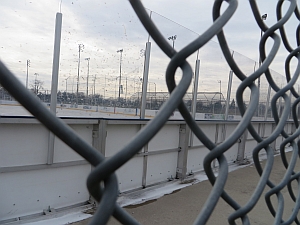 new strong bolts put on from the back

The rink still has not re-opened.

Missing: the boards blew down yesterday

1.30 p.m.: the rink has no ice, just concrete and bits of blowing snow, and the compressors are not on. It turns out that the end section of the boards blew down in the big wind yesterday. Before ice-making can resume, the boards have to be rebuilt.

There was a big wind last night. But no other reports came in of boards blowing down. Maple Leaf Sports and Entertainment paid for the fibreglass boards and inside reno in 2011. Some zamboni drivers are not fond of the fibreglass boards, saying they reflect the light back into the ice and make the ice slushy. Are the boards also weak? 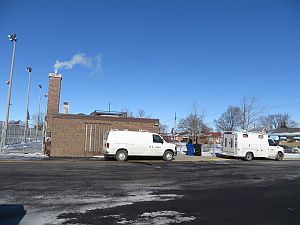 the first smoke coming out of the stack, a good sign

It was marked as "closed -- no water or heat" on the city's website since Christmas Eve, although the ice storm took their power out in the early morning of Dec.22. The power to that neighbourhood was restored on Boxing Day. There were trucks outside the building around 1 pm today, and in the afternoon the rink re-opened.

The signage was an adaptation of other signs meant for other uses. What would it take to run up a sign on a park computer saying: "this building lost power on Dec.22 and has been winterized to prevent the water pipes from freezing. It will take between two and four days to bring the rink back into service after the power is restored. Call 311 for updates."

But no such sign was there. And 311 doesn't give more information than "open" or "closed" anyway. 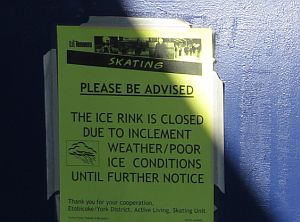 the ice conditions were not the main problem 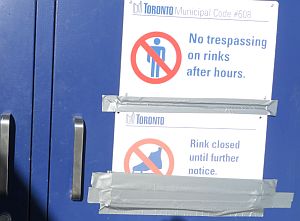 stating the obvious with no information

At 1pm, Sunnydale had an empty parking lot, no one in the building and no one on the ice. The ice maintenance staff was just about to go on the ice, its been snow squalls on and off all day long. The ice seemed to be there, not very thick, but might be good for a skate. No opening day signs anywhere visible outside of the building. 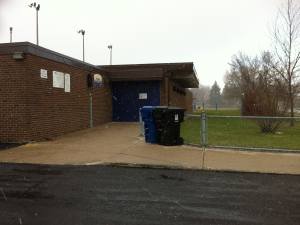 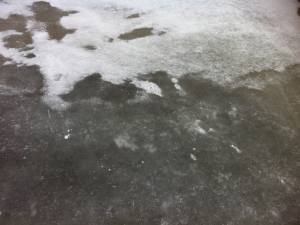 good ice on the rink
w 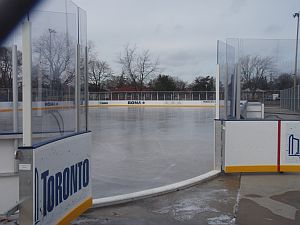 This rink was supposed to be open yesterday, but even though it was still closed, it was a nice surprise to see it in such good shape. The foreperson even speculated that the rink might be able to open this evening. Never in all the years since this rink was on the "early" list did it look this good -- only one day late.

There was a bit if back-and-forth about why the ice wasn't ready on time, with the usual "we had bad luck with the weather" rationale. The foreperson said they had been flooding between 6pm and 2 am (which is better than daytime floods) but again, only since Wednesday. He said, "you have to admit we're doing better than we've ever done," and I said, "no you're not. You should have started the ice earlier in the week and flooded overnight."

But he was right, they have improved a lot. Yes, all the rinks should return to flooding overnight during start-up. It's the "industry standard." But on the other hand -- Sunnydale is ahead of where it was in the last few years, by a country mile.

It was sad to see on the city's website that Sunnydale never did open today. But maybe tomorrow. And I wish I could show them our 6-minute video. How good the ice is depends on the amount of water you put down during the dark hours....

Late afternoon: Rubber mats are out. New boards all around the rink -- it looks finished, but no sign of ice-making. No staff on site. The change room doors are full of graffiti. Inside the change rooms are full of paint supplies. No sign of any work actually having started inside. 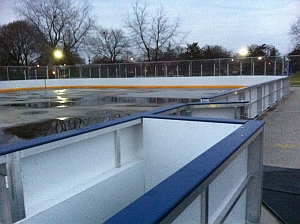 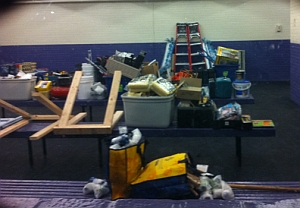 view through the locked front doors

The city's website said this rink was planned to open for the season today, but at 10.30 this morning it was still listed as closed.

According to this youtube video of MLSE "Team Up" crew, these projects are called "rink builds," although of course the rink was already there. Sunnydale Rink was completely repainted inside two years ago. It opened late that year, too, because of unfinished capital projects "state of good repair" work: RinkDiary2009-2010.

The new rink boards look very good, and so does the new rubber flooring. There was a certain amount of duplication, as well: the MLSE crew repainted the inside again last week, and rebuilt the existing staff desk.

This was the day of the official rink opening and the Toronto Maple Leafs' outdoor practice: MLSE "Team Up" videos. The press release says there were thousands of fans, another one says "hundreds" -- and Mayor Rob Ford was there too, as well as Councilor Doug Ford.

Lots of speeches, including one good one promoting the joy of pick-up shinny hockey -- will there be more of it at Sunnydale now?