"FYI volunteer crews have created 2 natural ice rinks at Sorauren Park this year. They opened for business today. They are flooded every night by volunteers. The City installed a new 1"-wide hose bib in the Sorauren Park Fieldhouse specifically for rink flooding, and provided hoses. Since we can keep them in the Fieldhouse, building the rink is much more feasible than in previous years, when hoses froze in outdoor sheds, and water access was through fire hydrants. The wrenches to open the hydrants often froze and broke.

"The weather this year has cooperated to make the rinks possible. No boards, but the City has plowed the two rectangles. One is on a ball diamond, the other in the outfield. The two rinks are connected by "ice bridges" to make a bit of an oval."

I hope to post a pic and short video on www.SoraurenPark.com. 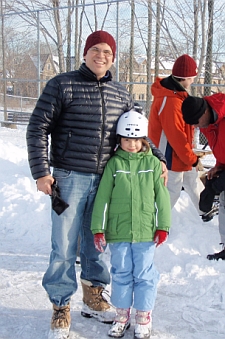 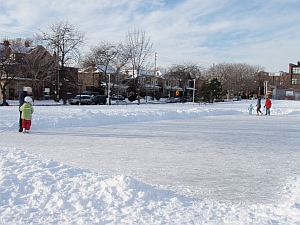 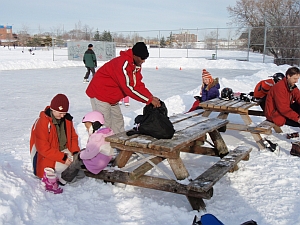 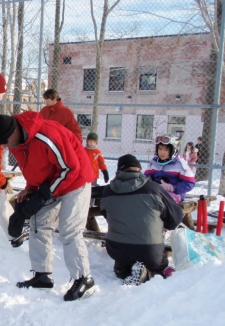 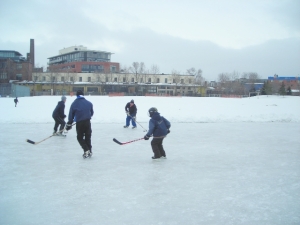 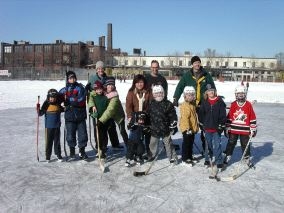 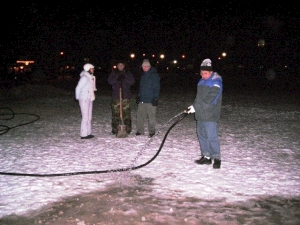 As the rink becomes more popular (lots of use today, and some kids show up at 6 am before school!) there is talk of setting up hot chocolate stands etc. on the weekends if we can muster the volunteer forces. If it stays cold enough long enough (looking good at this point) I think we can pull it together.

Roncesvalles Village/Parkdale: Thanks to Mother Nature, helpful crews at the City of Toronto Parks Forestry and Recreation, and particularly the unceasing efforts of a volunteer rink flooding crew, the natural ice rink at Sorauren Park is Ward 14 is outlasting most City of Toronto artificial outdoor rinks this year.

After many years without a rink at the park, the stars aligned this year to have two rinks at the park, connected by two "ice bridges". The recent February thaw spelled the demise of the little rink, but the bigger rink was saved and has been in use this week.

The rink has been flooded every single night, and some mornings, since early January by volunteer crews dubbed "the rink elves" by some rink users who wonder who comes out at night to mysteriously scrape and flood the rink. The rinks have brought joy to hundreds of people of all ages in the neighbourhood.

A rink video shot in January can be seen here: www.soraurenpark.com/rink.html

All artificial outdoor city rinks were slated to close on March 1, with the exception of 14 high-traffic rinks including Nathan Phillips Square, Dufferin Grove and Rennie Rink.