5pm It's public shinny for players 14 -18 years old. The ice is in good shape. There are five players on the ice. All are wearing helmets. Rink staff confirm that shinny players are required to wear helmets. CELOS is visiting the rink to confirm some details about the place. The Etobicoke skating brochure with all the outdoor rink schedules is posted prominently outside the office door. The staff also has copies to give out. The rink operator is happy to discuss maintenance. He shows the CELOS researcher the tractor that is used to clean the ice as well as the snow clearing equipment. Unlike the situation in downtown rinks, rink operators in Etobicoke have equipment on hand with which to clear the snow and don't need to wait for a plough to come. The rink operator and rink coordinator both say that people often come to the rink in the middle of snow storms expecting to skate even when it is snowing too heavily for the rink operator to keep up. Rinks in Etobicoke don't allow members of the public to help clear the snow. This isn't considered necessary, because the rink operator can do that himself with the equipment on hand. The rink coordinator said that park maintenance was responsible for those blue and white outdoor signs outside the rink. This is an example of the kind of confusion you get when different departments/divisions are responsible for the rinks. The rink staff (rec workers) had posted the proper schedule inside the rinkhouse and had correct schedules to give out, but it wasn't their job to take down the incorrect sign outside. Of course, at several rinks, staff did use tape to cover up the incorrect information.

10:45am There is adult permit hockey on the ice. At least one of the players also uses Rennie and High Park rinks. He says the ice at Sir Adam Beck has been good this year, but the ice at Rennie hasn't. He says at Rennie there are four guys sitting around. They didn't know the schedule and the player had to print out his own copies. 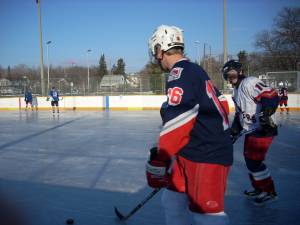 10am Cold clear day. Adult permit hockey. Players say the ice is good for opening day, but a bit "bubbly". There is a problem with the doors the ice cleaning tractors use. They aren't locked. They open when players bump into them. Rink attendant was looking for something to keep them shut. The dressing room was clean. The doors to the arena where locked when the CELOS researcher went to leave. The rink attendant had to unlock them.