This proposal was superseded by the MasterCard donation.

from CELOS, Centre for local research into public space, in response to the budget crisis of 2007-2008

See also What Needs Fixing and How to fix it.

City Council has said that outdoor rinks will not open until January 2008 as a cost-cutting measure. Here's a better plan. The following proposals would save rink service, while costing very little. 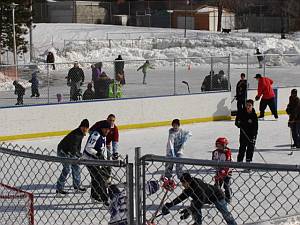 See map below for distribution of these.

1. every rink should aim to get $2000 permit income per rink (permits only after 9 pm -- high demand and no interference with youth/child shinny hockey). Senior city outdoor rink staff, indoor arena staff, and the "Save Our Rinks" network can help with publicity, to find the permit groups.

2. have rink staff sell canned/bottled drinks and pre-packaged snacks (minimum) at every rink. Dufferin Rink staff can help set this up. Net income per rink for December: $1000 - $3000, depending on usage.