From rink user Angelina Tan: Passed by the Ryerson rink this evening and there was a City worker flooding the rink. He said the rink should be ready by Monday.

4:15 pm: No signs and no staff to be seen, hard to tell whether it's officially open or not - no skaters so I laced up & went for a glide, but stopped when my toe hit a divot down to concrete. The ice has clearly been skated on but pretty thin. Looks like the changerooms are under renovation. A number of people crossed the ice in shoes to check it out, and one Mexican wrestler on a scooter tested it with a couple of speed laps before tootling back up the zamboni ramp and returning to his/her regular business. 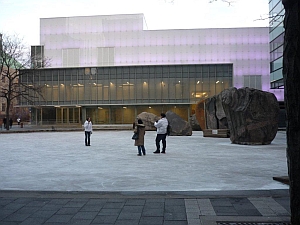 the new Ryerson building is finished, barriers are down 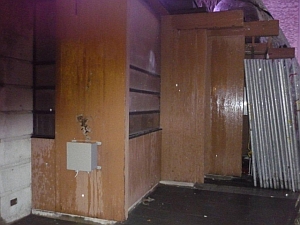 changeroom still out of service after two years

6:45 pm: It's raining, the ice looks ok but no one around. The little rinkhouse is still there but the entrance is blocked off by fence panels being stored there - I'm not sure whether that's just for the weekend or until construction on the neighbouring building is complete.

From Rafael L.: I stopped by the Ryerson rink today around 2pm. The ice was pretty rough (but usable if you are really desperate for a skate and don't want to walk to Nathan Philips) and no one else was on the ice, so I just did about 4 laps and got off.

dramatic lighting on the Ryerson building

The rink was lit up in brilliant blue by the neighbouring LED panels on the side of the new Ryerson University building. The ice looked in good shape, because it was almost unused -- there were only three people skating. The rink change house is even more blocked than before, obviously used as a storage area for the metal fencing left over from Ryerson's construction. 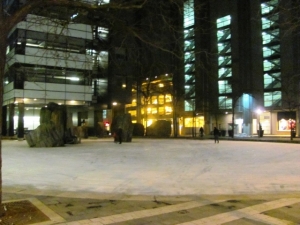 From rink visitor Rafael Lewis: At Ryerson Rink, I saw a security guard smoking nearby the rink and asked him if the rink was usually this empty. He didn't even know that the rink was a legitimate rink. He told me if any city officials were to see me on the ice, I would get a ticket. He retracted his statement when I told him I saw the rink was designated as a city rink and listed as "operational" on the city website.

No wonder its an orphan!

Hello, In this year's "rink diary" on the cityrinks.ca website (not-municipal) we note that although the neighbouring construction at Ryerson University is complete (after two years), the rink's beautiful little change house is still locked, and is actually being used as a support for Ryerson's stored construction equipment:

Could you let us know when the change room will become accessible again?

A rink user also sent in a rather disturbing story about comments he heard from a security guard.

From rink user Rafael Lewis: Ryerson actually had quite a few skaters on (I've only been there about 3-4 times, so last night was the most I've seen - at least 10 people). There was a security guard present, walking on the ice and around the rink. Some of the teens were playing Sockey (Kicking a puck around - a combination of Soccer and Hockey!)