8pm-10pm Adult Shinny was quiet -- only 7 men showed with most in their twenties; and two men in their sixties. Everyone was very friendly and welcoming to include a newcomer (myself) joining in.

This rink is in a secluded area in wealthy Rosedale. There is only the single hockey rink with a well-kept change room and plenty of rubber mats to walk to and from the rink and change room. Due to its secluded location and the neighbourhood, there is quite a disparity between rink users at Rosedale and rinks like Dufferin. However, nearby Ramsden, and still in the affluent area (but quite visible off of Yonge) has had near overwhelming numbers during the Adult Shinny hours in the evening.

There was quite a bitter wind this night, but the rink was quite sheltered being in a park surrounded by mansions and trees. The ice was decent for being at least a week into the scheduled opening of the rink, but the recent warm weather and rain made the ice soft, but good enough to skate on. There was no staff on-site and I did not ask other users if the rink had opened on schedule on December 1

Last week at Ramsden Rink, a rink staff person told everyone at Adult Shinny to wear helmets the next time they played. Most everyone murmured to each other that they would do so (whether they meant to or not). Last night at Rosedale the single rink staff on duty confronted me as I arrived at the rink. She asked me very strongly whether I had a helmet. When I told her I did not she was very insistent that I and all the others had to play with helmets or that the next time we came without helmets she said we might not be allowed to play (!).

I told her that I sincerely doubted their ability to enforce this and to make players comply and that at Dufferin this is not enforced and hasn't been for years. She said that she would normally let us play at our own risk, but the City supervisor for the rinks would be coming to do inspections. What was she to do if the supervisor saw that they were not enforcing the policy? I asked then if there would be repercussions for rink staff and she was not at all sure.

She then said she was going to kick all the players off the rink at 10pm. This is when the rink closes, but the lights remain on for a longer period and, over the past few nights I have played, the other rink staff have been good enough to let everyone play on. At Dufferin, the rink staff allow users to play on unsupervised time from 9pm-11pm on the pleasure skating side during the permits on the hockey side and until the lights go off. I wonder why this can't happen here as long as rink staff don't mind putting the nets up and locking the rink later than 10pm.

The rink was quite busy during Adult Shinny -- quite a contrast to the past week with barely 6-8 players showing up. Now there were roughly 30 players and a goalie. At 9:45pm the same rink staff lady came on the ice and shouted that there was 15 minutes left until she locked the rink. Sure enough, at 10pm she came on and told everyone to get off. The game did stop but a number of stragglers continued to play with their friends. Others were angry and called her names behind her back. It did seem ridiculous to end the night while the bright lights shone on. However, I did not argue as the official closing time for the rink is at 10pm according to the Rosedale Rink page on the City website.

The lady hovered by the gate to the rink waiting for everyone to leave. As I was leaving I offered to help putting the nets up which she politely declined. I wished her a good evening, while she had a worried look at the 8-10 players that had not yet left the ice.

I'm now reviewing that, as of a few years ago and very likely to the present, there have been zero claims against the City for unhelmeted injuries on outdoor rinks. Next time I will inform the rink staff of this -- if they are worried about liability. If it is concussions we're worried about, helmets are no guarantee against such a thing. The lady seems worried about her and the staff's accountability if the supervisor shows up and reprimands them over this. I find this curious at Rosedale as the rink staff are often not onsite and last night was an exception. I wonder if the next time I show up sans helmet if I she will try and bar me from playing? I wonder if the supervisor is Kevin Mercer, supervisor of active living? 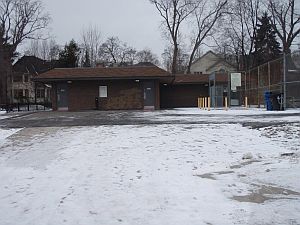 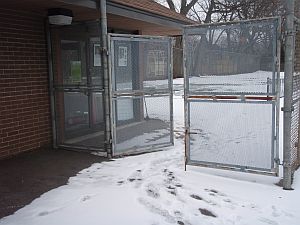 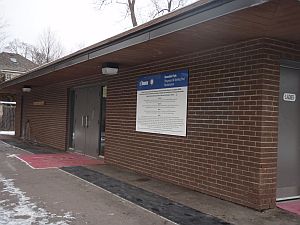 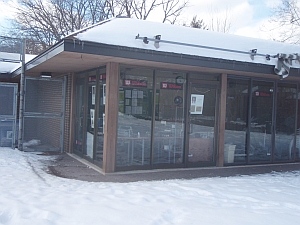 tennis club, with windows, part of the same building 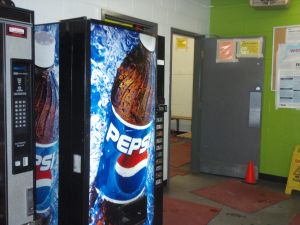 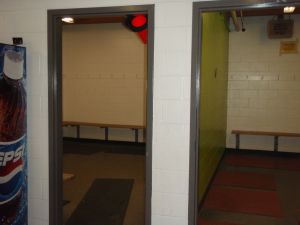 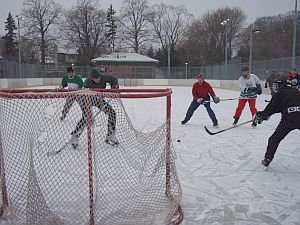 fast game; nets could use mending

Interesting difference of approach between the comfortable tennis club on one side, with couch and chairs and signs of sociability, versus the windowless rink side. The message seems to be "put on your skates and get out." There is a staff person on site but he mainly stays in a windowless, unlabelled staff room at the end of the building.