Yesterday I called the rink to find out hours for Leisure Skating. I arrives at about 2:30 to see that there were 6 or 7 teenagers playing hockey. I asked the attendant about the hours and he said that he was just about to divide the rink in half so the teenagers could keep playing and I could skate. I objected as I do not feel that I or the 5 children and parents(who soon came) should be subjected to that compromise.

The attendant then attempted to ask the players to leave. It took him 10 minutes to get a few off. Two stayed and the puck was flying.

The attendant then ordered them to leave again. They did not and I was left to deal with them alone for a while.

During my discussion with them they became quite threatening, insulting, and made derogatory remarks such as me "not being a real man" etc.. They gave me the finger as they drove away.

So much for "leisure skating" on a beautiful winter day..

The attendant advised me that there are a few groups of guys every year who pull this stunt. This particular group live in the area and even one of their parents returned to the rink to challenge the attendant.

....These guys should not be allowed on the ice with sticks and pucks in the first place if it is a designated Leisure Skating time slot.

The cityrinks.ca website is not a municipal website so we can't do anything about your complaint directly. However, 311 as you know IS a municipal service. They may have already directed your complaint to the Recreation Manager, Kelvin Seow. In case they didn't do it yet, I've cc'd him here.

Our website originated in Ward 18, with Dufferin, Wallace, and Campbell rinks. Single-pad rinks (in our case, Campbell Rink) do have contested turf, and the building attendants and rink guards may need backup from rink coordinators to enforce the leisure-skating schedule. In the case of skaters who refuse to listen to the staff, we found it helpful for staff to have a serious talk with those skaters the next time they try to come and skate. When they arrive, the supervisor should be radioed, and should come to the rink to participate. The talk should carry the clear message that if such a refusal to observe the schedule happens again, the group will be asked not to return to skate at that rink for a week. (If they return despite this, they can be given a letter of trespass and directed not to return until they have had an interview with the senior area supervisor. It seldom comes to that.)

Whether these young guys have local connections or not, the rules are the same for everybody. Leisure skating and shinny hockey don't go together very well, and everybody gets their turn. Even the rink rats understand the justice of that, and with consistent follow-up, they pretty soon get in line. Hodgson Rink is nearby, and is a double pad, so they can move their scene over there.

One other helpful thing is to have the leisure skating hours posted prominently at the rink and to have a stack of skating schedules available by the door for people to take home. Then people can plan ahead, and the rink staff can point to where it's written.

I believe that the manager, Kelvin Seow, will be helpful in making sure this problem is addressed. Let us know the sequel! 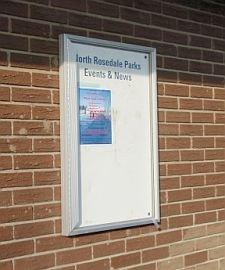 At 2.50 pm there were 12 pleasure-skaters on the rink, and the zamboni flying squad drove up to do the ice maintenance. Although we had heard that bits of this rink might be down to cement near the boards, we coudl find no thin ice, and the skaters said they hadn't noticed any cement. One of the skaters asked if there was any skating rink in Toronto where you could get a cup of coffee and drink it in comfort. She was surprised when I said, yes -- she said she had assumed that they all had ugly change rooms. And indeed, the change room at Rosedale Rink is particularly dismal, small and cramped because of the big vending machines that take up lots of the space.

I went over to the building attendant to ask if I could put up the ombudsman poster in the change room, but he cut me off before I could ask my question. "we're not supposed to talk to you," he said, and walked away. I had never met him before, but perhaps the zamboni drivers had spoken to him.

The foreperson was nearby, loading a bag of trash onto her truck. She suggested taping the poster onto the outdoor bulletin board, so I did. 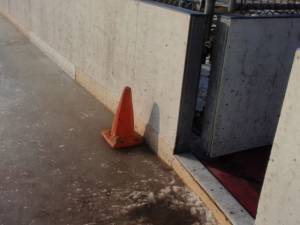 hole where the sun hits and people get on the ice 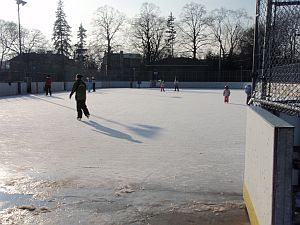 This is Jennifer from 311 and a resident called in today to complain that when she skates the washrooms are closed and the rink is in very bad condition.

Could that be looked into and fixed so that people can enjoy the facilities more comfortably and safely? 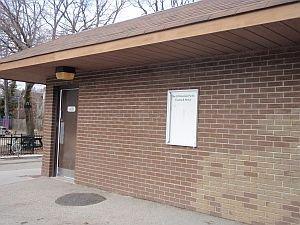 At 11.30 am the rink changeroom was locked, as were the washrooms, but the rink was open and the ice had been resurfaced -- no skaters and no skate marks as of yet. The poster had been removed from the bulletin board. So I taped up a new one.

Peter Lewis, the supervisor for the area, has spoken to the staff that turned you away last Saturday. I would like to apologize for his lack of judgement and professionalism. 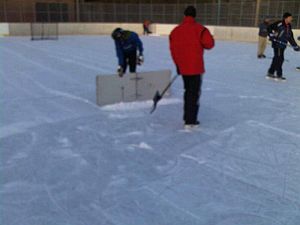 20 people showed up for highlevel shinny at 8am sat morning and found a pathetic ice surface an inch of snow and choppy ice not flooded probably for at least 2 days..it was pathetic we had 2 plastic shovels and a sandwich board and our hockey sticks to try and clean the ice spending 30 mins to make it marginally playable..the city has fallen short consistantly this year on service and apparently have no plans to improve anything...absolutely dissapointing..

Could you pass this on to Parks? - it's my understanding that the flying squad drivers start their shift at 6 a.m. and that they resurface Rosedale first, on their way to the more westerly rinks -- so it's a puzzle to know where they were this morning. Perhaps their Saturday schedule is different.

It will be helpful to see the flying squad schedule so that there are fewer bad surprises. The director wrote to me last Wednesday: "I am having staff compile the fly-squad schedules and will forward the information to you as soon as I receive it all."

As soon as I get them, we'll post them, and then if the weather is fine and yet nobody comes, people will have something to point to.

They were having mechanical issues this morning.

I will pass on your request.

The rink was excellent on Sunday morning...20 skaters had a dream-like high level shinny game.