Opening day. The ice was almost okay but it had thin patches near the entryway. Six people skating. The rink change house doors were open but there was no sign of any rink attendant other than a parked car -- knocks on doors produced no result. Much of the rink building and surround looks in need of care and attention -- scraped doors that need paint, a signboard with no information, a deep crack in the asphalt path that's just covered over with a piece of rubber mat. 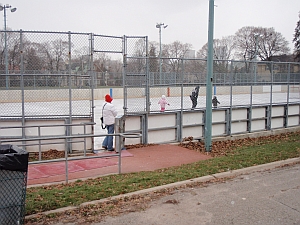 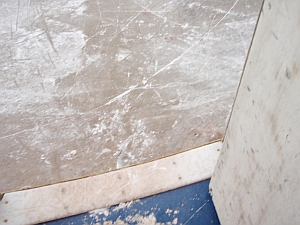 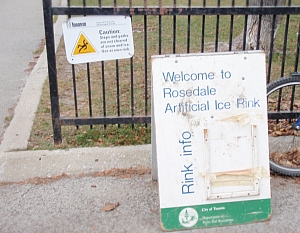 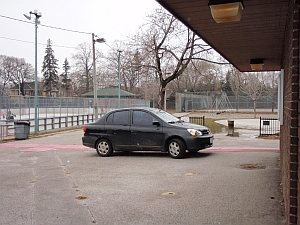 staff car? But no evidence of staff 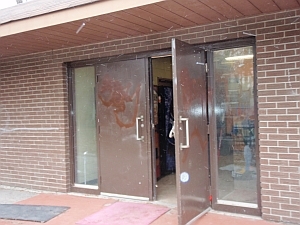 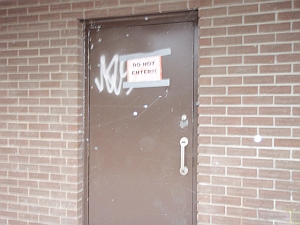 E-mail from R.R. to cityrinks.ca

I would like to file a complaint with the city about the maintenance of the Rosedale hockey rink. Could you advise me who to contact and how?

The long tradition (10-20 years!) of the same players coming out to the weekend early-morning shinny games (Sat 8-10; Sun 9-11) is in jeopardy this year because of the terrible maintenance of the ice. In the past, the flying zamboni team would clean the ice first thing in the morning ensuring great games. But this season we've faced unplowed snow and rough ice. The rink attendant doesn't let us use the scraper and there's only one (!) shovel for the snow. One morning we shovelled and scraped with whatever we could find for 1h and could only play for 20min......it's a very sad state of affairs when the kind of cameraderie that has developed over the years is threatened because of city's indifference.

Cityrinks.ca is not a city website, as you may have noticed already, it's external. But I can certainly tell you who to contact.

Your complaint is not unusual, and people in various parts of the city are trying to solve these kinds of things at their neighborhood rink, e.g.: Ramsden Rink.

One problem seems to be a very uneven distribution of outdoor rink ice maintenance staff. All single-pad central Toronto neighbourhood rinks except for Kew have been recently downgraded to "minor" rinks, while in Etobicoke those rinks are called "major" (like our double pads). The many single-pad hockey-board rinks in Etobicoke have on-site ice resurfacing staff and vehicles for 9 - 14 shifts a week, leaving the central single-pad rinks with the crumbs (flying squads that come twice a day on good days, often less).

The new acting general manager of Parks, Forestry and Recreation, Brenda Patterson, recently defended the present situation in writing: "The start-up this season has gone very well, with only a few minor disruptions....Staff is pleased with the availability and assignment of equipment and believes it is more than sufficient to support the needs program across the city." Her whole letter is here.

It would be very helpful if the general manager heard from other rinks that it's not working as well as she seems to think. However, in case City management never do get it to work this season (despite the considerable cost of the large and well-paid ice maintenance staff complement), shovels and scrapers are a big help. At Dufferin Rink we (rink users and on-site rec staff) fought the "battle of the scrapers" some years ago. As a result, the director at that time put out a citywide memo explicitly permitting rink users to work alongside rec staff to clean snow off the ice. However it seems that a number of rinks have slid back into the old approach of "NO."

The rink staff at Dufferin, Christie, Wallace and Campbell rinks have worked out a shovel protocol and have already begun to do regular supplementary ice maintenance, since the City is demonstrably not able to deliver an adequate level of maintenance at the central rinks (not even all double pads). You could ask Parks to supply Rosedale Rink with a total of three green rink scrapers (two single-size and one double) and four snow shovels, plus a letter of permission to use them. The person who can get you the shovels and the letter is the ice maintenance supervisor for your area: Peter Leiss.

The person who can clarify the on-site building attendant's role in supporting the manual ice clearing with the best shoveling routine is City recreation manager Lucky Boothe . He may wish to send the Rosedale rink staff to Dufferin Rink for a quick training refresher with the rink staff there. Lucky would also be responsible for ensuring that any staff reluctance to support rink users is remedied.

And the address for the general manager is [email protected]. Drawing her attention to your problem is perhaps the best way to make sure it gets immediate attention. And -- of course -- gaining the support of your city councillor is always helpful: [email protected]. He must be very aware of the issues you're facing, having dealt with them for so many years at Ramsden.