1.30pm: 3 skaters on the ice no helmets. 2 are pleasure skating (child and adult) and one child is practicing with a puck and stick in the corner. 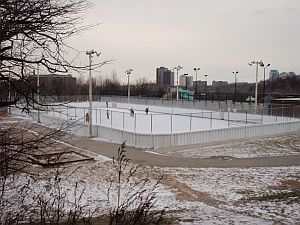 not many pleasure-skaters on this holiday

Numbers at 4.30 pm: 6 pleasure-skaters, plus 8 inside, some leaving, some lacing up.

The building attendant said he's surprised that the building is scheduled to be closed on New Year's Day.

He also said that during the holidays many of the east end rinks have long stretches of pleasure-skating time and so the people who want to play shinny hockey often find that there's no nearby rink that lets them play. He wished that there could be more coordination between different rinks so that during Riverdale pleasure-skating times, he could direct shinny players to a nearby rink that was available for playing.

6.15pm - ice is skateable but has some snow on it, 2 child shinny players, no helmets are wacking the puck against the boards and zipping around.