Chris Gallop wrote this e-mail: "I'm told that at first there was an estimated 200 litres of missing fluid from the pipes (Glycol I think they said?) and an assumption was made that there might have been a leak in the system. However, that quantity of fluid has since been found hiding in the compressor. Technical Services staff have been putting the system through its warm up checklist and at this point everything appears to be working fine and the rink should be able to open on schedule. However, if any new developments surface, staff have promised to notify our office immediately and we will keep the community informed."

So the whole scare, raised by Parks staff, may have been a totally false alarm. The bike kids are mad, and worried. They feel that Parks is looking for excuses to get rid of the BMX course. 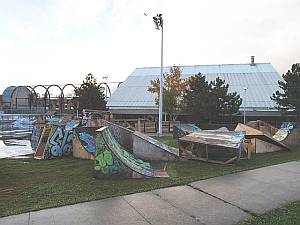 BMX ramps and wooden frames south of the community centre 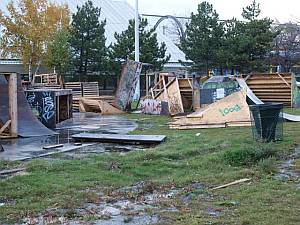 CELOS researcher: "When I went there today I saw that the cement covers had been put back on, although there are small pieces of blue wood or plastic underneath, maybe to allow easier access if they have to lift them again?"

Chris Gallop from Councillor Giambrone's office called to say he had spoken to Parks manager Kevin Bowser, who told him that Wallace Rink is fine now, and will be ready to open on Dec.6. No more details available. 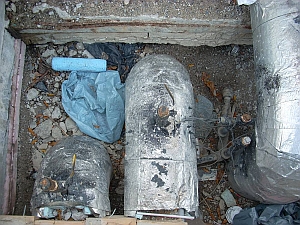 CELOS rink visitor: "I asked a couple of boys on bikes if they saw anyone working today. They said no. They said they haven't seen workers in a long time."

No progress. When a CELOS rink visitor went to the park at 7:30pm, there was no sign that anyone had looked at the pipes since the last visit.

Harbourfront has a new website that doesn't have an obvious link to their rink information. But they answered a request for information very promptly. They propose to open the rink a whole week before City Hall -- which is great. But the Central Park outdoor rink in NYC is opening even earlier -- October 20. Whose scheduling fits the season the best? It will be interesting to monitor the ice conditions of those rinks this fall.

Report from CELOS rink visitor: "Nothing has budged. The whole rink looks so sad. It appears that no litter has been picked up there all summer, and because the place is so popular with youth, there's plenty of litter lying around." 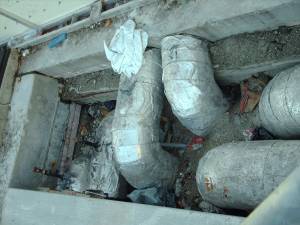 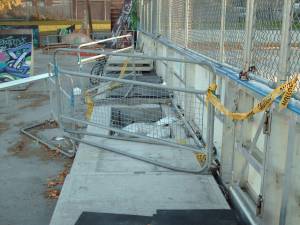 Report from CELOS rink visitor: "It's a beautiful day, and no one was there. The skateboard dude said no one has been there all week." 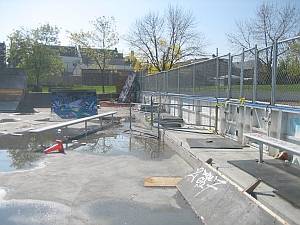 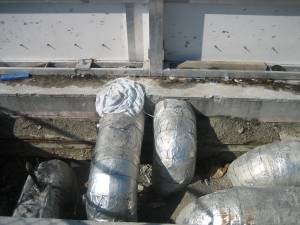 Still the gash in the pipe

Soon after the ice melted in early March, the very popular BMX bike course was set up again on the rink. At the end of March, two of the wooden platforms caught fire and burned fairly dramatically. The cause of the fire -- accident or arson -- was never determined. 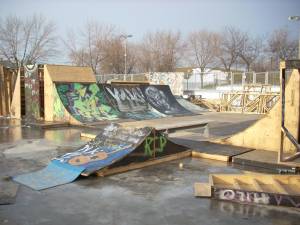 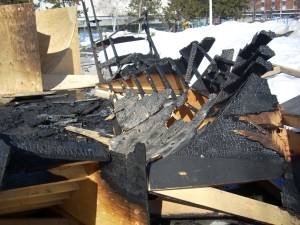 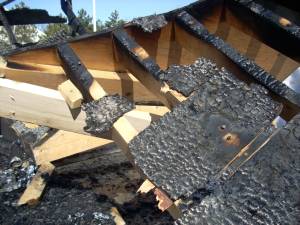 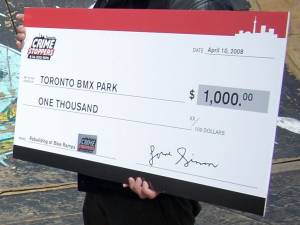 Parks staff called in the CIMCO rink company to test the brine pressure in the PVC pipes under the cement, to see if the heat of the flames might have damaged the pipes. They found low pressure, but as far as we know, no follow-up was done until September. The reason no follow up was done was apparently the presence of the platforms, although they certainly did not cover the whole rink surface.

During summer, the BMX users noticed that one of the concrete platforms that covers the centre trench between the two ice pads was partly lifted up. It stayed that way all summer. Some BMX users said they saw raccoons going in and out of the trench. In late summer when the youth looked in there, they saw a gash in a silver metal pipe, and some liquid leaking out.

In late September it appears that CIMCO came to look at the pipe. Also they apparently checked the brine fluid pressure again and found it was too low for both rinks. Now the concrete platforms near the damaged pipe have been been removed and stacked, and a small barrier has been put up.