Lots of back and forth about the wood stove. Are community assets being destroyed? Is this kind of threat based on evidence of danger or just on the numbing power of the free-standing word "safety"?

From the city staff who look after the buildings: "The councillor may have funded and endorsed the project, but these types of installations have to be in compliance with all applicable codes. Our understanding is that it is a contravention of the fire code due to the building occupancy type, not the actual stove installation."

There is certainly much puzzlement about who initiates and follows through these frequent crises associated with community activities in parks. Again, from the "Facilities and Real Estate" staff: "Our direction for these buildings comes from Parks. We don't act unilaterally on issues normally and definitely not on sensitive issues such as this that have the potential to have a negative impact on the community."

Weather: high 5 celsius, low 1. The rain overnight washed all the snow away.

10.50 a.m. no sign or workers or street sweepers yet. Lots of leaves and dirt. 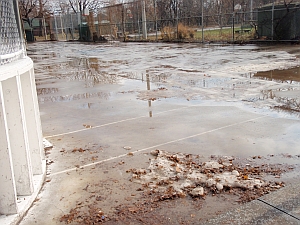 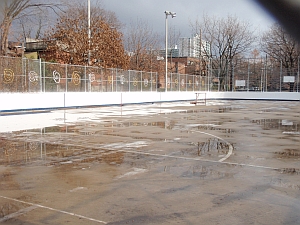 1 p.m. The street sweeper came. It didn't hit every spot but it's better. Hopefully the crew will clean it some more when they begin laying down the water tomorrow. There are so many people calling and coming by the rink now, to check on the opening day. And the rec staff are running between four rinks, trying to get everything ready and sharpening the rental skates with the new machine.

From shinny hockey player Craig Pardey, about Beginners' Shinny at Hodgson: The good news is that you don't have to sign up or pay a dime; you just show up and play :) The only requirement is that you wear a helmet although most people also wear hockey gloves.

The City usually assigns an instructor to help out with some drills for the first 1/2 hour, and then we play for an hour or so.

There are also other times at Dufferin Grove and Ramsden - both also free and require no sign-up.

shinny at Ramsden: The good news is that you don't have to sign up or pay a dime; you just show up and play :) The only requirement is that you wear a helmet although most people also wear hockey gloves.

The City usually assigns an instructor to help out with some drills for the first 1/2 hour, and then we play for an hour or so.

There are also other times at Dufferin Grove and Hodgson - both also free and require no sign-up.

Message on city rinks 'hot-line' The message says "The City of Toronto has partnered with the Toronto Maple Leafs and the Home Depot to improve the High Park outdoor ice rink. As a result of the revitalization efforts currently being undertaken, the rink [will not reopen until] mid-to-late December providing construction is not seriously affected by adverse weather conditions." 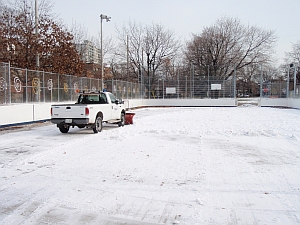 10.30 a.m. Two workers preparing the rink -- one shoveling snow mixed with leaves away from the boards, the other pushing snow off the hockey pad with his truck.

11.00 a.m. workers gone (for lunch?) They returned around 1 p.m. but just waited in the truck and then said they had to go up to another rink. They said that a street sweeper would come on Tuesday, to clear off the leaves.

Recreation staff were moving the last few rubber mats, rink shovels and two shinny hockey nets out of the compressor room. The Parks rink supervisor had sent a message that these items were a safety hazard for his tech crew: the increasingly strange use of the Ontario Health and Safety Act. In the old days, which really did exist I hope, the tech crew would have asked the rec staff to store them in the corner where they wouldn't be in the way.

On the plus side, the mechanics say that all the city's zambonis are tuned up and ready to go, in the main garage downtown.

All schedules and the city's "rink hot line" said that the rink would be opening today, "weather permitting." The weather was perfect -- minus 6 celsius and a feeble winter sun -- but the rink was NOT open. It was covered with snow and there was a sign posted, saying the rink wouldn't be open until next Thursday. The post card seller offered "Natrel Rink is open." (That's the rink at Harbourfront.) 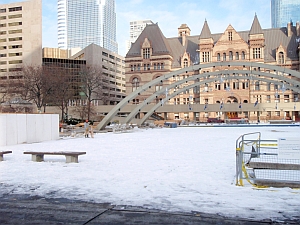 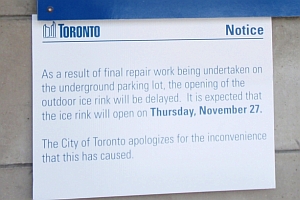 opening day is postponed because of construction 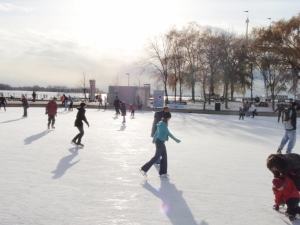 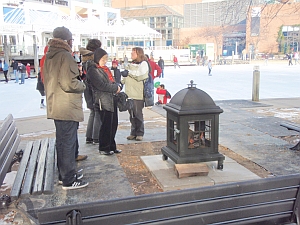 A perfect day to open -- minus 6 celsius and weak November sunshine. A lively scene at the rink, with a new addition: a little warming campfire in an outdoor wood stove. One of the staff said the fire was an idea that came down from management. It's a bit off to the side, near the pizza oven, maybe hard to find -- easier if the restaurant decides to serve hot chocolate there. There was a musician playing a guitar, and staff said a storyteller would be coming around five. The only problem was the women's washroom -- on opening day, two toilets had an "out of order" sign on them, and the third was hard to close. 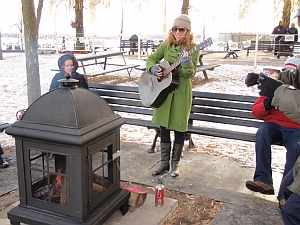 Musician by the fire 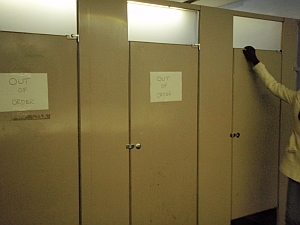 At a community/rink staff meeting to plan out the coming rink season, there were lots of good ideas -- family Sundays with hot chocolate and a campfire, on-ice games for beginning skaters, arts and crafts to be run by the Friends of Christie Pits, healthy snacks made in the community kitchen and involving youth in the preparations.

But near the end of the meeting, when the wood supply for the wood stove came up, it emerged that the wood stove is considered an "unauthorized installation." The rink/swimming pool change area is not well-secured and has been the location of many break-ins over the years, and it seems that a small fire may have been set in the last break-in. Someone downtown seems to have concluded that the solution is to get rid of the wood-stove.

No one at the meeting was happy to hear that, and they asked the community centre co-ordinator to follow up.

The wood stove was installed in 1998, with funds brokered by Councillor Joe Pantalone, and with the support of Mario Zanetti, then the Director of Parks and Recreation.

[Old message from February 18 2008, only just found] your website sucks can not retrive simple info without severe trouble congradulations just wanted to find places to play shinny hockey in the city what a nightmare using your program ridiculas will cc sanadra bussin but it is not her fault this is typical city of toronto joke and waste of resourses K.S.

Response: Hello -- I just found this message -- did I miss it last February, as the date of the e-mail says? Sorry you had trouble finding what you wanted on the website. But we are not actually a city-run website and therefore you don't need to worry about wasting your taxes (if that is part of your beef).

Maybe if you can let me know which rinks you want to play shinny at, I can copy the information for you. There are city schedule links in the right column of the cityrinks.ca home page: City Skating Brochures.

1. check out the rink map, then click on the rinks you're interested in and use the prominently listed phone numbers to call them and ask about their shinny times

2. Come to Dufferin Rink and tell us your shinny-locating problems in person. Just don't use the word "suck" -- it's not a fun word, and shinny players are usually pretty much fun.

Hi, My name is Beau Callaghan and I'm one of the Natrel Skating Rink's supervisors. I'm sending this message to inform you that our rink now has a Facebook group called 'Natrel Skating Rink @ Harbourfront Centre. We'll be checking the group daily and updating info about ice conditions and events taking place at the rink this year. Such as our new Fireside Rinkside seating area where skaters and non-skaters may enjoy a warm fire and take in a performance from storytellers and acoustic guitar players.