From Director of Parks Paul Ronan to cityrinks.ca, cc Helen Sousa Certainly. I will forward to helen Sousa who Kevin has clearly identified as the contact during this time. Take care

Nov.20 2008 From cityrinks.ca to Director of Parks Paul Ronan

Sorry, my mistake. Ms.Sousa, the rink user has asked that we post her letter and I'd like to post the solution as well -- good news is always welcome -- could you keep me posted?

Helen should be in touch with you if she has not been already. I spoke to her personally about this.

You are correct in assuming that the intention was to only have one unisex changing room for the purpose of changing into your skates and this is the reason why only one room is fully matted. I would agree with you that better signage to indicate this could be provided. We will work on this for the upcoming season. We will also provide matting leading to the women's washroom.

Thank you for bringing this to our attention. (:/letter:)

To cityrinks.ca from High Park rink user S.H. (:letter:) Winter is in the air and the skating season is upon us, so I got to reading your report cards for rinks. It reminded me of an issue at the High Park rink from last year, and it occurred to me that you might be good folks to mention it to. They had set up, for a good part of the season, skate mats that went down the hall and into only the men's changeroom - none into the women's room at all - not to get there, and none in the room itself. The men's room, on the other hand, was covered completely with mats. Not cool. And very unwelcoming to female skaters.

I know that several women took to moving the mats each time they came, so perhaps this will be remedied this year. Here's hoping...

Copy of Sarah Hayday's e-mail, plus comment: Fyi -- if this situation was because the skate change area is meant to be unisex, sounds like some better signage is needed, maybe? And still, there would need to be mats to the women's washroom. Sounds like there is a bit of a shortage of mats, citywide.

Thank you for your e-mail. I am on vacation and will be back on Monday, December 1st, 2008.

Nov.19 2008 From cityrinks.ca to Paul Ronan, Director of Parks 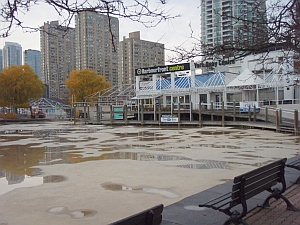 Weather: high of 11, sunny in the morning, then cloudy but still mild. Rain in the evening, but low of 9 celsius -- still warm. The Harboufront Rink web page says that the rink is opening on Nov.15, which would be tomorrow. But no such luck. At 3.30 pm the door to the compressor room was propped open but there was no one in there. Three staff inside the change room said it's too warm to make ice. And indeed the compressors were not running and there were only puddles on the rink concrete.

The Central Park web site says that the Wollman Rink in NYC is open, however, and all skating lessons today were on as normal.

(:letter:) From Tijana Petrovic, assistant to Councillor Mihevc, to cityrinks.ca I am writing to you with an issue regarding the rink facilities at Nathan Philips Squre. I am aware of the renovations that have been happening, and I also wanted to point your attention to the problems with the broken locks on the lockers. A concerned resident has pointed out that this has become a problem, especially during the busy times. It seems that some of the locks won't accept change or do not close properly.

The cityrinks.ca website is not a city website -- it's run by rink enthusiasts who want to make sure the rinks work well for citizens. The people you would want to contact to address this problem are Parks manager Kevin Bowser or Recreation (Active Living) supervisor Kevin Mercer. One of them probably needs to contact PDIM to put in an order for locker repair.

I've cc'd Dave Hains, the recreation supervisor responsible for staffing City Hall Rink with rink attendants -- if the broken lockers were an unreported problem last rink season, he'll probably want to make sure that his staff are attentive to any related rink user complaints this winter. A situation where rink users are unsure of the security of their shoes, purses, etc. can really certainly spoil an otherwise wonderful time at the rink.

Thanks for the email - we were aware of this concern at the end of season earlier this year and have made arrangements for this problem to be addressed. I have contacted the person who reported this to you and assured her that this problem will be addressed. I gave her my number in case she had any other issues.

Report from the CELOS rink visitor: The wooden frames for the BMX ramps are still there, but they are neatly stacked. 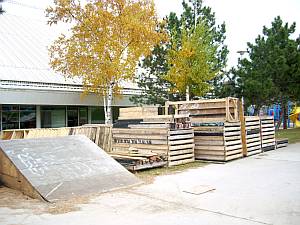 Stacked wooden frames next to the rink pleasure pad 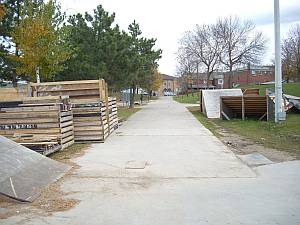 Letter cc'd to cityrinks.ca, from A.G. :

Councillor Denzil Minan-Wong has his priorities straight. Last year, the children in my area read in shock how they were going to shut down the skating at Ramsden Park because of lack of funds. Mastercard Canada came up with the emergency money. Now, I read that the city is using $40 million to make over Nathan Phillips Square during the next five years. In the face of childhood obesity and the desperate need for public access to fitness and fun, I ask that the city councillors look to funding our local skating rinks. They are in sore need of repair, and given how few options there are in the winter to exercise in the inner city, this would be money used prudently.