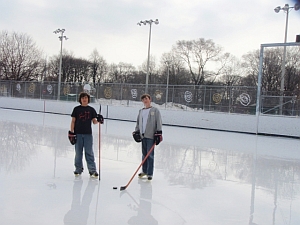 Cloudy and +16 - thin layer of water but good ice

Weather: high of 16. Mostly cloudy but with some sunny intervals. The morning sun helped, by covering the rink with a layer of melt-water. If there's water on the ice (from melting, not from a hot flood), that layer of freezing water protects the ice underneath. Water only forms this protective melt-layer if it's very warm out. If it's cold and sunny in March, no water melts and the ice goes straight to slush.

But today was an amazing congruence of warmth and melting and then lots of cloudy periods so that the ice didn't get too much sun. That meant kids could skate around the edges by 5 pm, and by 7.30 the ice was just fine. By then the City had made the call to close the rinks, so there was no zamboni to clear off the water. Three kids pushed the water off with giant squeegees, and they were rewarded with as much food as they wanted at the zamboni cafe after. They really stuffed themselves, too, but the ice was perfect when they finished.

Sadly, the permit cancelled anyway. But some shinny hockey kids and a few families skated.

No ice maintenance at all today.

Weather: high of 4, then supposed to go up to 7 overnight. Sunny off and on all morning, which made the ice get puddly and cratered in places. Cloudy with a minute or so of rain around 9.30 pm. The rink was closed after 1 pm. The pleasure-skating side was reopened after 6, but the little kids were allowed to play hockey on it, because they and their dads came out in droves (same last night). The hockey pad was reopened after 7, and then there was a good game until the permit came, and a good game for the permit too. But they said the ice was kind of rough in places and the puck bounced a lot.

[[ Weather: started out at minus 9 this morning, sunny all day, and up to 1 by mid-afternoon. Low -6. Ice maintenance: 9am s/f both, 12:30 s/f both, 3:45 s/f both, Rink closed from 3.30 - 5:30 hockey side, till 6pm pleasure-skating side. Pleasure-skating side was cut up more in middle than hockey. Sides of hockey crunchy and badly skated-on 3 ft. from boards north side. On the pleasure-skating side only 2 ft. from boards. Hockey middle solid and in good shape. Recommended that tomorrow we evaluate at 2pm to close the rink. 7pm zamboni blade askew. Maintenance was skipped.(Flooding only would not have been a good idea.) 9pm-9:20 hockey side maint. edges scraped.... blade still not good... light flood. Edges very crunchy.

Weather: sunny and starting out cold (minus 14) but going to warmer -- only -5 this evening. Much gentler than yesterday. And many more people at the rink. 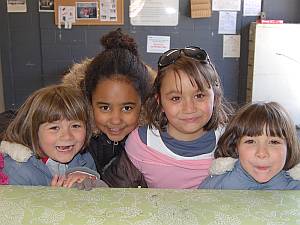 Some of the people who came to the rink today were surprised to hear it was the last day of the season. A few said it was too early.

E-mail from L.S.: Another beautiful day for skating outdoors: clear, cold and sunny. I arrived at about 11:15 am. Once again, door locked and no sign of attendant. One other adult skater on the ice. I put my skates on outside. At 11:30 a female attendant who is often working on Sundays appeared, standing outside the rink building door talking on her cell phone. As she has two other Sundays in the past, she said she had called a supervisor to report she was late. This time she said it was due to a death in her family.

It is hard to tell whether this young woman has valid personal reasons for being chronically late opening the building on Sundays, but it is not acceptable from a rink user's point of view. While I was inside the building she asked me to speak to her supervisor Alex, and handed me the phone. Alex apologized for the inconvenience but seemed to share the worker's point of view that as long as lateness is reported to a supervisor, everything is fine.

While this was going on a family of 4 arrived and two more adult skaters for a total of 8 on the ice by 12. The ice was not in acceptable condition, had evidently not been resurfaced and was covered with holes bumps and soft areas. I stayed around the area until 1:30 today and no sign of zamboni team. Of course, everyone was enjoying skating despite conditions, but my companion and I were not able to skate very fast for fear of tripping on a hole.

I was sad to leave as this is the final day for the season at this "orphan rink". I hope my complaints have at least made the City staff aware that there are concerned users who care about the state of the Ryerson rink.

Weather: sunny and cold, high of minus 5, low of minus 13. Skaters came out but it never got crowded, too chilly.

End of season comments from A.M.: Here's my two cents re my neighbourhood rink which is Christie Pits. Twice this winter I went there to skate with my kids and we were turned away because the Zamboni never arrived on schedule. Both times, the ice was unusable because of excess water. These were on cold days that had followed strangely mild and rainy ones. Apparently the Zamboni guys said that there was too much water, but last time I checked that's one of the things a Zamboni is designed to do: vacuum up the water. On those same days, Dufferin Grove was open - even though the weather had been no different in that neighbourhood - and we went there instead.