Ice Maintenance: At 10am the ice is mostly clear but full of cracks, because the ice froze quickly after the temperature dropped yesterday. There is snow along the edges. The Zamboni arrives at 11:10. It does a flood and scrape and leaves at 11:30 The ice is in good condition. 7 pm s/f.

Ice Maintenance: Zamboni arrived at 1:30pm at the same as a school group from St. Rita's was using the ice. Rec staff asked the Zamboni to leave so that the children could skate. At 4pm the b/a and a patron used the green shovels to manually clear thick snow off a third of the ice. 6-6:30pm, the Zamboni did one pass around the rink to pick up the snow, then did a second pass to scrape and flood the ice. When the Zamboni left the ice was in beautiful condition.

Weather: high plus 2, low minus 7. Mainly cloudy with some sun. In the afternoon everything was melting along the boards and the paths were muddy. 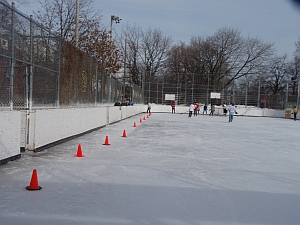 pylons up the side 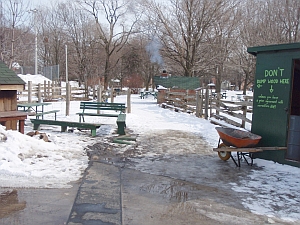 muddy path to the ovens

Then in the evening the ice set up nicely. A lot of people came over from Regal Road School for their "family skate night." One of the parents had arranged for free hot chocolate, so that was flying out the cafe window. meantime outside Jenny was baking the Wednesday night sourdough in preparation for the market. People were remarking on what a perfect night it was, so mild and sweet, when all of a sudden it began to snow, and it didn't stop until after everyone left (actually, much later it turned to rain). 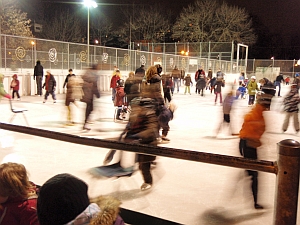 an unusual number of skaters on a week night 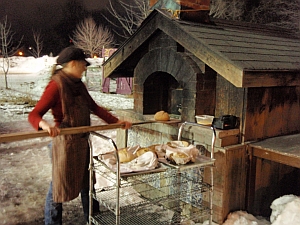 Jenny at the bake oven 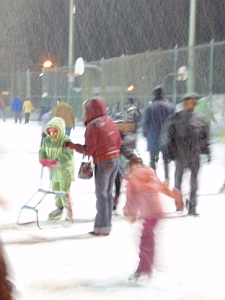 suddenly, a lot of snow 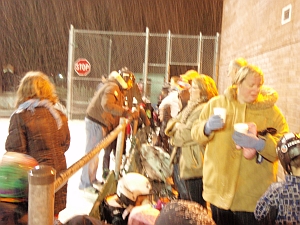 By 8:45 all the families had gone, and the women's shinny permit began to arrive. But no sign of the zamboni driver. He didn't show up until a few minutes after 9, and by then there was so much snow on the ice that it took him until 9:30 to get it off. The shinny players were pretty mad, since they all knew he ought to have started earlier. They stood at the fence and watched. Then they had only half an hour left to play. They said they didn't mind playing in a bit of snow (it was still coming down), but that they did mind him coming late again. I guess it happened to them several times before.

Ice maintenance: 9.30am/1.30pm slush 4 feet from boards not touched. 3 pm maintenance skipped (with consultation) -- too slushy and soft for Zamboni wheels. 7pm scrape and flood not using brush on the hockey side just blade, also on pleasure side, 9.10 scrape both sides.