Maintenance: At 3pm the ice looked like it had been recently scraped and flooded. It was clear with only a few skate marks on it. 5:15 scrape and flood.

Weather: sunny, minus 9 this morning, to go up to minus 6, then down to minus 13 tonight. Blowing snow, but clean and glittery.

An email inquiry came from the municipality of Halifax: "I am trying to find out how may days the rinks are open and how many days they are closed due to the weather during the skating season."

Counting: the rink was able to be open for skating for 80 days counting today. It had to stay closed 1/4 day in November, 4 and 1/2 days in December, 3/4 of a day in January, and 1 day in February. So 6 1/2 days closed altogether (adding up parts of days). Pretty good, considering that there's been a lot of weather this winter. 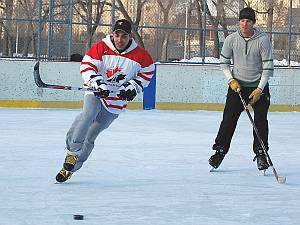 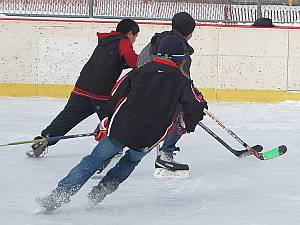 Ice maintenance: 10:15am two ploughs and one Zamboni scraped snow off the ice, no flood. 3pm Manual scrape

It snowed last night and when the building attendant arrived at 10, the ice was covered in snow. Two boys with skates and hockey sticks were sitting in the benches, but they soon left. About half an hour later a man came with his two daughters to skate. The b/a offered to help clear a section of the ice.

As the skater and the b/a were shovelling off snow, two city ploughs arrived followed by a Zamboni. It took the three machines 45 minutes to remove the snow. Thee was no flood. From 12 to the man and his daughters who have been here before on Sunday shared the ice with 3 hockey players.

It has been a bit slow at Campbell lately, but there was plenty of hockey today. At 1pm there were 10 players on the ice. By 3pm there were 17. At 4 it was snowing and the ice was covered. A group of players asked the b/a if they could use the green shovels. The b/a said they could if the game stopped and if they shovelled the snow to the two Zamboni gates. The players were eager and did a great job cleaning the ice. When some of the younger players got in the way of the older ones using the shovels, they were told politely but forcefully to get out of the way. 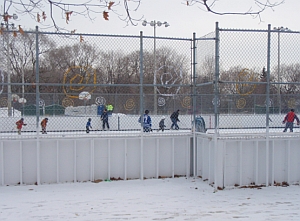 Weather: High minus 1, low minus 11. Overcast and threatening snow until 4 pm when it did snow, about 5 cm.

Last year there was a lobby for a separate little-kids shinny time (9 and under). Since there's so much Level 1 shinny already, staff were dubious. But it turned out to be very well-attended. Some kids, still unsure of their skills, practice in a corner with their dads or moms or aunties. But a lot of them are happy to put their sticks in a pile in the middle and play games. These days, one of the littlest kids in those games is also the best. He's four, and he's something to see. Hockey scouts, you should probably drop by -- 1.30 to 3 pm. His little sister skates on the other side with her mom. She hasn't begun to play shinny yet, but she looks great skating. She's two. (Runs in families.)

In the evening it was "Bikes on Ice." The late-afternoon snow had stopped by 9 pm when the races began. It resumed at about 10.45 just in time for the final race. There were more spectators than in any of the years before, and they were certainly enthusiastic. A very friendly event. 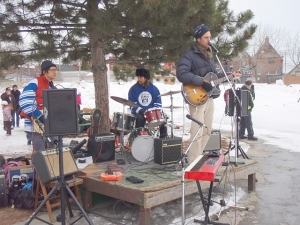 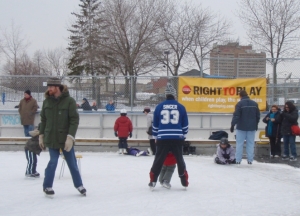 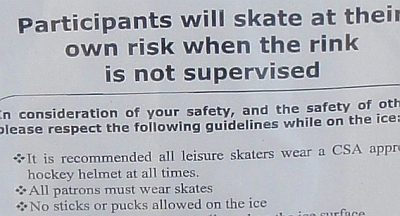 no pucks or sticks

Hello -- to follow up from Monday's meeting about Broadlands Rink:

I went there this morning hoping to take a photo of the banner or the new signs. I was surprised to see only this paper poster (photo excerpt):

"No sticks or pucks on the ice" -- so nothing has changed, still no additional shinny hockey. Can you let me know if it will be changing?

Also, the day after we met, the Dufferin Rink staff got a directive to work toward conforming with the city's cash-handling policy. Since there is no city computer at the park, this will take some working out. However, I assume there's a computer at Broadlands, so the rink staff could enter all income and expenses easily. Here is the December skate balance for Dufferin Rink (as you see, it pays for itself, especially if staff can do most of the rentals as part of their regular shift -- all staff have tons of spare time, including Local 416 staff.

Attached is the revised skate schedule for Broadlands AIR for the remainder of the season. A temporary (paper) sign has been put up effective February 19, and all location staff have been advised of the changed schedule. Installation of the permanent sign to follow.

1. Did Chapley and Glen Long get the same paper signs, or only Broadlands?

2. I see that none of the non-program shinny hockey times are in prime time, i.e. none after 3.30 on weekdays, and none on weekends. So no open shinny for school kids, nor for youth, nor for working folks. Is that because prime time is 100% permits?

3. I see that all three North York single pads are scheduled to stay open to March 15. Will they be keeping their permit schedule for the extension as well? If not, that could be a good time for shinny players (little and big) to get extra ice time in the evenings (daytime is often mush in March). Can that be arranged?

Yesterday I saw that the front doors at West Mall Rink were still locked -- was that just an oversight for yesterday or is it a policy?

I just want to give you a chance to check into it before tomorrow's meeting with Councillor Davis.

E-mail from L.S.: The CityRinks visit to Ryerson rink on Family Day seems to have borne fruit, as the ice was beautifully smooth tonight. When I first arrived (7:30pm) I was disappointed but not surprised to see a thick coating of fluffy snow from this afternoon's storm. I cleared a track for myself using the shovel from the rink building. Around 8 the Zamboni team arrived and did a proper clearing. The ice did not need flooding - it was perfect, and I skated around the rocks enjoying the night (if not the wind).

The attendant told me the maintenance squad had been to the rink at 11 and 3 today, so this was an (unusual) third visit. The zamboni operator was very insistent that the attendant log their visit. Perhaps this is due to some pressure from higher up? Whatever the reason, the result was a rink in nice condition tonight. Too bad no one else braved the cold.

A directive came today that the rink staff must stop handling money, so that means no more skate rentals and no food. No word yet on the timing of this change.

We got news that the staff are not going to be allowed to handle money anymore, so that means no zamboni cafe and no skate rentals. Nothing has happened yet, but the directive is there -- discussions coming up in the next few days.

My goodness, sometimes it seems that City Hall is a crisis-making machine. They need to change their motto to "if it ain't broke, don't fix it."

There's a new directive -- staff must stop handling money, so that means no skate rentals and no food. No word yet on the timing of this new rule.