Weather: high 9, low 9. A lot of fog, showers in the morning, a few periods of drizzle in the afternoon and evening. The ice had no maintenance at all. The morning shift zamboni operator came by and said that if he went on the ice, the zamboni would gouge it. He seemed to think that the idea of a zamboni taking up water was kooky.

In the afternoon there was no evidence of any zamboni driver and the supervisor's pager was turned off.

The ice is high enough already that with all this rain freezing onto it, there will soon be a problem with ice thickness again, as in rainy winters of the past.

At 9 pm the ice had dried up on its own (still 9 degrees, but the rain from the earlier showers had frozen onto the ice) and there was a shinny game going on, plus some pleasure-skaters. 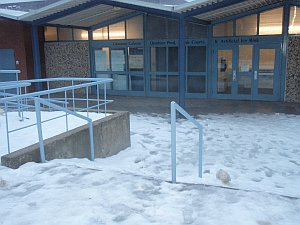 Foggy and mild today, with showers. At 4.00 pm the rink is open but full of water. It's hard to get there -- the stairs are still not shovelled and neither is the ramp. There's sign taped to the door, with faint writing on it saying to go around, presumably because the stairs are unshoveled. But in order to see the sign you have to be so close that you'd have gone down the stairs already.

So instead you have to squeeze by the construction vehicles and across the slippery snow and come in the side door. Once in, the rink ice is hard and smooth underneath the layer of water. No skaters. Inside there are three people -- looks like three staff. One of them is the same zamboni operator as last time. He says there's no use running the zamboni on the ice, since the ice is melting.

I don't even ask about the stairs. These three men have all the time they need to clean the snow and ice off the stairs, since there is no intention to clean the water off the rink ice. The mild weather makes it possible to do a good job on the stairs. But the zamboni operator already explained the last time that he has no intention of removing the snow, and the supervisor has not replied to my e-mail question about it.

Mild, 9 degrees, earlier rain showers that left a layer of water on the ice. At 7 pm the rink was fairly dry, even though the zamboni operator said he had only gone on a few times, since he was worried that he might hurt the ice.

At 7 pm the rink was drying up but still damp. Four skaters. The zamboni driver said he had gone on the ice a few times, but not cutting the ice, only using the cloth to sweep the water.

At 4.30 pm the rink was in good condition, although the weather was foggy and mild. The zamboni driver said that this was the second day of a hockey tournament and there had been a different game every hour. To prepare for the tournament he had come in at 6 a.m. and worked on the ice for three hours. Then the games had gone on, and despite the showers and the mild weather, only a single game had been forfeited -- all the other games were played. 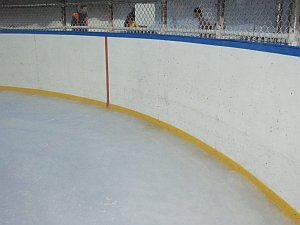 The ice was about an inch lower because he had shaved it every time, but that was not a problem, the operator said, because it had been over three inches thick already.

Unlike almost all the other rinks in the central-Toronto area, this rink got maintenance, and therefore it had no water on it at all.

The operator said that the staff of this particular rink try to keep the ice not too thick, and sometimes when they know they want to shave ice, they run off the compressors at night so the ice will be a little softer in the morning, and easier to shave.

At 8 pm the rink changeroom had a sign on it "rink closed due to weather." This was despite a City "rink hotline" announcement saying all the rinks were open. The hockey side was wet and showed no sign of maintenance. The pleasure-skating side had four skaters playing hockey, since the water had mostly run off and the ice was fairly free of puddles.

It appears that the area rink supervisor had sent all the zamboni staff home for their afternoon shift, presumably on full pay, and turned off his pager, so that rink staff could not reach him to ask about ice maintenance. By contrast, Rennie Rink had hourly ice maintenance and was able to run an all-day tournament with only one game cancelled. The ice was good there.

A pity for Ramsden, that it doesn't have the care that Rennie gets.

From the City's "rink hotline" "Due to flooding at Withrow clubhouse this rink is not operational today."

At 10am the ice was a little softer than it had been last night and the nets had started to sink slightly into the surface. The air was warm and there was a light drizzle coming down. The ice was hard enough for skating but no one was there. At a quarter to eleven, a couple came by with their young daughter. They asked if the rink was open. The building attendant said it was. They skated for about fifteen minutes. Afterwards they asked about pleasure skating times. The building attendant gave them a schedule and mentioned that Wallace-Emerson was a double pad where they could go pleasure skating anytime. The couple said Campbell was better for them, because they would only be skating with their daughter for fifteen minutes at a time.

At 11 a plough came to the rink. The driver put the hockey nets up and left. At 12:30 the Zamboni came by. By that time it was raining fairly heavily and the rink had become a lake. The Zamboni driver used a hose to wash down the high ice that had been left by the west gate.

The ice underneath the water was hard enough for skating. An hour later the steady rain became a brief downpour. When the rain let up, the rink was covered in water and fog. The rink was very quiet most of the day. A few people stopped by to check the ice or to pick up a schedule.

At 7, a father stopped by with two of his sons to play shinny. By this time, the ice was in pretty good shape. Most of the water had either run off or frozen. After the first group started playing, a second dad came by with two younger boys to ask about playing hockey at Campbell. He said they usually play either at Dufferin or inside at McCormick where they have to pay. He asked if his boys can play here for free.

This is a surprisingly common question at Campbell this year. Maybe it has something to do with new people moving to the neighbourhood from places where there aren't city-run outdoor rinks. Campbell, like all of Toronto's municipally-run outdoor artificial ice rinks, is paid for by taxes. With the exception of people who reserve a permit time, there is no charge for skating and playing hockey here.

At 8, the first father leaves the ice with his sons. He says the ice is good in the middle, but is high along the edges. He suggests this needs to be taken care of. At about the same time the second father comes back with his two boys. Then another father arrives with two more boys. The four boys play shinny while the two fathers look on. One man is from Portugal. He says he never learned to skate but likes watching his boys play.

Weather: high 3, low -4 (n the morning -- then rose in the evening). Snow in the morning, then cloudy. The zamboni worked a lot of the morning, because snow was falling. The snow stopped around noon, and then the ice got better. Steady but not crowded today.

The plow came in the early afternoon, the zamboni after that -- skateable by about 4 pm (report from rink neighbor).

There was never an answer to the email above.

On this day: Parent and child shinny, parents say it is the best and that they wish they had more hours, other parents say that during the holidays it is well attended (requiring shifts of little kids and their parents!) but that usually it is more calm. There must be 30 people on the ice. The kids are suited up with hockey pads, jerseys and helmets, most adults have helmets but some don't.

The outdoor information board has a too small copy of the schedule and the brochure which is basically to high for any non professional basket ball player to read and again the type is too small. However efforts have been made: the staff have a stack of schedules available and there is an innovative note on the outdoor board by the rink saying "find staff over there" with an arrow.

Inside the changerooms it is as dismal, although clean, as ever. The ice is good, they are getting a minimum of 3 floods and scrapes a day, sometimes 5. Staff are friendly. Staff have made another invention: they have a sign up sheet for helmets and they put duct tape on the helmets (official ones from the city "Nike") so that people write down their names to borrow a helmet and staff have 6 helmets available!

As usual there is a lot of ice to navigate between the rink and the staff room. Also the pathways to the rink for the boardwalk, Lee avenue and Waverley are not cleared.

The rink was ploughed out at about 2:15 and then the Zamboni finished repairing the ice at 4pm. The staff said the nets couldn't be put on the ice because it was "soft," but the skaters rightly pointed out that the ice was not soft, so the staff let them bring the nets back on. "Three days without ice, and then no nets for shinny! It's too much. "