The rink has good ice, despite the lack of maintenance -- the rain last night really helped. A couple of kids are playing shinny hockey. 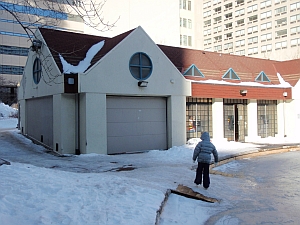 this rink has a heated garage but no zamboni 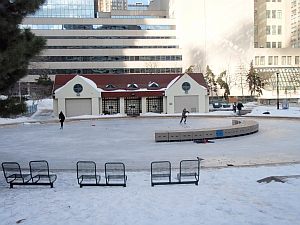 good ice in the middle of downtown

Colder and sunny. However the rink had to stay closed because the piles of snow left by the ice maintenance crew yesterday were frozen and stuck to the ice. The only skater today was a young boy who came with his mom in the morning. She said her son wanted to try on his new skates and that there was enough good ice for him to that. 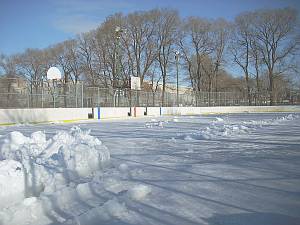 Rows of frozen snow left by plough
Click to enlarge 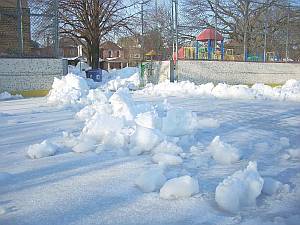 No place on the rink for hockey
Click to enlarge

At 1.45 pm on Christmas Day, the rink was very full of skaters. 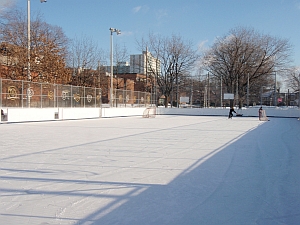 10 a.m.: the first skaters have straggled in, some with new skates. Last night's rain turned the ice into a beautiful smooth sheet, so it's no problem that no ice maintenance staff are scheduled for today. All the skaters are smiling. Inside the rink clubhouse, the coffee is on and staff are just lighting a fire in the woodstove.

By early afternoon there are lots of skaters at the rink, all of them cheerful. It's sunny, the ice is still okay despite the lack of resurfacing, and it's Christmas -- plenty to be cheerful about!

No maintenance. A couple of people came to try to skate, but the ice was too cratered, and they went home again.

Hodgson Rink was open and staffed on Christmas Day.

No maintenance, not skateable.

The rink is open, with good ice and five skaters, of whom one is wearing a Santa hat and one has a hockey stick. All wave when I tell them I'm taking a photo for cityrinks.ca. It's a beautiful day and the skaters look very pleased.

At 1.30 pm the rink had lots of people skating and parent-child shinny on the hockey pad. The pleasure-skating pad ice looked good despite the scheduled absence of Christmas Day ice maintenance. The rain on Wednesday evening was like a free scrape and flood, so that all the rinks that had their snow plowed off earlier on Wednesday had smooth, hard ice on Christmas morning. On the hockey side, the nets had been pulled in toward the west, suggesting that the ice on the east side might be a bit rough.

The rink change rooms were open, although no staff was in sight. A knock at the windowless office door did not get an answer, but another knock, and opening the door, revealed a building attendant sitting at the desk, with his arm in a sling. He didn't have much to say, except that he didn't know anything about how the ice clearing went on rainy Wednesday. He said he was just filling in for someone.

On the ice, people seemed to be enjoying their skating a great deal -- lots of smiles and "Merry Christmas" greetings, and "bravo's" for the big scorers on the shinny hockey side. 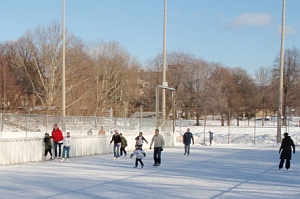 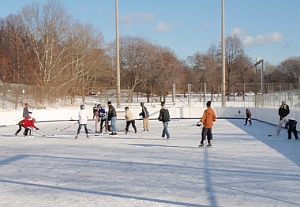 Inside the change room, the new bulletin board had been put up, with a drawing of a proposed rink building renovation, long overdue. The drawing showed a larger "activity room" (skate change room) and a smaller staff room. Right now the staff room is as big as the change room, and it looks as though it may at one time have been a team change room.

The bulletin board also had a request for community ideas about the renovation. Hopefully someone, staff or skater, will suggest a window in the staff room. Invisible staff make no sense! And the staff should be able to see the rink from inside, as well.

Late in the day some more news came from the adult shinny group. It sounds like the large message gap between the maintenance staff and the program staff in this department has had a few particularly bad effects at this rink. The traditional Christmas morning shinny game got bumped by children's shinny, despite assurances given to the adult group, right from the Parks director's office, that their game was a go.

However the rink supervisor made a special trip to the rink to assure the adult shinny group that the Boxing Day game would have good ice and the rink would be open, weather permitting.

Bad weather, snow and then a lot of rain. Ice maintenance crew arrived at the rink around 4 pm, pushed some of the heavy, wet snow off and then left for Christmas Eve. 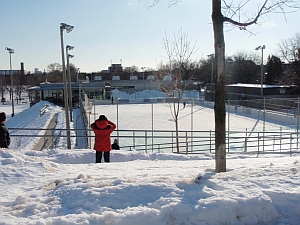 Christmas Day - trying to skate, but too bumpy

There was snow and then lots of rain, and the plows never came. No ice maintenance at all.

Weather: high 5, low -3. Heavy rain for a while in the afternoon. In the evening it cleared off amid very strong winds.

Two plows and two zambonis worked on the rink to get it clear in the morning. Apparently a couple of old-hand zamboni drivers had managed to get the jammed puck out of the augur without taking the zamboni to the shop. Still, that zamboni was sticking a lot with the heavy snow, and the driver was fairly fed up, having to go into the garage so often to rinse it out.

Despite the balky zamboni, the rink was open by noon and there were a few good hours for parents to "run their kids" so they'd sleep tonight despite the big excitement coming on Christmas morning, for those who celebrate Christmas. But by mid-afternoon the rain started coming down heavy, and the staff closed the rink early.

Snow followed by rain: no maintenance.