Weather: High -2, from a morning low of -10. The temperature rose throughout the day. Light snow from 3 to 7, then a break, then more light snow.

There was an extra pre-Christmas farmers' market today, because this year the regular Thursday market days fall on Christmas Day and New Year's Day. By the time the market set up, it was already snowing, and not many people came. The farmers were good sports about it, but they were glad to pack up and go home before the forecasted ice rain began.

The fan belt broke on the condenser -- it made a clacking noise and then it was eerily silent. The Tech Services staff guy came from home when it almost dark, and climbed up to the roof and replaced the belt. Hurray for Tech Services guys who drive through snow and sleet to fix fan belts!

But then came more trouble. Because of the snow on the ice, the rink staff missed seeing a puck buried in the snow when the zamboni went out to resurface, and the zamboni swallowed it up the augur. Damn. That will be three days in the service garage, maybe. Or longer, because of Christmas. After that, the foreman just used the plow-truck to get the snow off. Maybe the maintenance staff will eventually work out a regime that always brings the plow truck on before the zamboni when there's been snow. But given the experience of the past few snowy days, it may be that those plows are in short supply.

"I've got another $200 for you for the last 3 months. Dufferin Grove residents who have used buyingblock.com. What would you like me to do with the money? Also, so you know we now have created a group fundraising feature. People add their names to a group and the group gets dollars. Check it out. http://www.buyingblock.com/groups.php. For every new mortgage, mortgage renewal and real estate transaction, $$$ go to groups and charities."

Last year Bruce brought in four boxes of kids' skates that he had bought on sale at Canadian Tire, with that money.

You never know where gifts will come from. 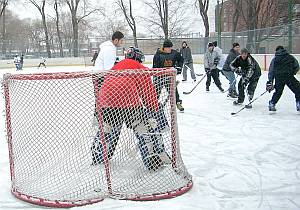 3pm - Thirty players on the ice
Click to enlarge

Another snowy day that called for lots of shovelling. Some of the regular shinny players started their Christmas holidays today. When the rink staffer (building attendant) arrived at 3pm, he found thirty players on the ice. Some had been there since 10am and were unhappy that the rinkhouse wasn't open earlier. They told the rink staffer that the Zamboni had been by at 9:30.

By 4pm it was snowing heavily and the players asked for shovels to clear the ice. The rink staffer brought out the two large green shovels. The players pushed the snow to the two rink gates while the staffer cleared the snow from the gates. By 5pm, 10 players were left on the ice despite the snow. After a while the remaining players left leaving the ice empty for a while.

At around 7, a local man brought his two nieces for pleasure skating. He said they had been by earlier, but didn't go on the ice because of the hockey players. 7pm is shinny time on the schedule, but since there were only three hockey players on the ice, the rink attendant let the girls skate. Their uncle asked for a shovel to clear the ice. Once again the building attendant brought out the big green shovels. The uncle and two of the hockey players pushed the snow to the gates which the rink attendant cleared. The rink attendant hadn't quite finished clearing the west gate when the Zamboni arrived. After the Zamboni had scraped the rest of the snow, the ice was in good shape. But the snow kept coming and the rink was soon covered again. 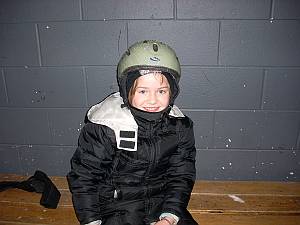 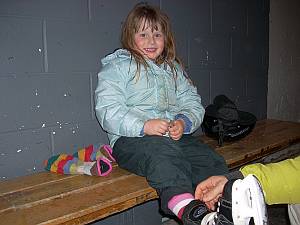 Skating puts a smile on her face
Click to enlarge

The weather didn't stop people from coming the rink. Some of the boys played hockey despite the snow, while others stayed in the rinkhouse and played checkers.

At about 8:30, Grace, who has a regular Tuesday-night permit, stopped by to make sure the rink staffer knew about the permit. A little while later, the first of the permit group arrived. They played checkers while deciding whether to go ahead with the game in the snow. The rink attendant offered to bring out the green shovels again.

Since the permit group was short-handed, they let the local players share the ice. Together the permit group and the local players cleared the ice using the green shovels, while the rink staffer cleared the snow from the gates. That done, the people on the ice put their sticks in the middle of the ice, and chose sides in the time-honoured way. Sticks were thrown left and right. Which way your stick went determined which team you were on. Despite the snow there was a lively game of shinny.

Normally, the rinkhouse closes at 9 and Grace's group takes off their skates outside. However, looking at the snow piling down, the rink staffer didn't have the heart to lock the players out. He stayed later so that the hockey players could change indoors. 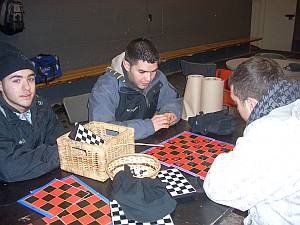 Playing checkers while it snowed outside
Click to enlarge 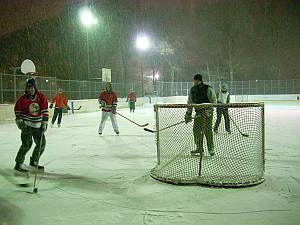 8 shinny players, without any helmets. A family asks for skates and a helmet but neither are available. Another group of people complain that the online brochure schedule is incorrect. Schedules are available on site for anyone to pick up and are posted.

There is broken glass and a broken fixture in the men's changeroom. The women's is locked up. Jimmie Simpson has also had a rebuild from Home Depot and the Maple Leafs, including new plastic boards. Are these boards louder than the old ones? Staff report that the new boards require almost daily maintenance.

Although the mats are great, the path to the rink is still covered in snow. There are no benches outside. Staff can't see the rink from their office, which faces in the wrong direction and has no window anyway.

The ice is in very poor shape, staff say they get maximum one scrape and flood per day usually in the early morning. Because of the rain and snow about 2 inches of ice has built up in mounds around the edges of the rink. They need the edger.

Weather: High -7, low -13. Sunny much of the day, some flurries in the early evening and then clear.

Holiday crowds today, big jam of people renting skates, way too many people on the all-ages hockey time. The rink is such an intense social space too, for so many different generations. The loudest are the mid-teens, and some of them forget their manners and get pitched out for the day. But so much of the back-and-forth is good-natured. There are sledders, too, coming into the rink house for hot chocolate, red-cheeked from an hour of sliding down the little hill by the Dufferin Hollow.

In the evening there's good shinny hockey and tonight, because it's Monday, the only full-equipment permit. The group calls itself "Dufferin Groove." Some of them are engineers. They play music in a garage in the summer, hence the name. One of their goalies came inside at the end of their permit time, when the lights turned off, and said -- "that was too good. That was just the greatest. There's nothing better than playing outside like that." He must have played hard, because he had some sweat icicles in his hair where his helmet had been.

Beside the rink the snow piles are enormous. The loader must have been here, and pushed back the snow into big new mountains, to make room for the next load. There's a wide snow road going through the park, and this year for the first time the snow crew have made another wide path along the rink where everyone walks. Very civilized -- skaters don't have to pick their way through the snowdrifts any more, to get into the rink from the east.

In early afternoon there were 15 hockey players, 20 people in the rink changeroom and 8 people pleasure skating. Only 4 cars in the lot so it must be walk-ins. Hockey pad looks like it hasn't been scraped in a few hours of serious use but otherwise is in good shape. The pleasure-skating side still had snow around the edges and corners and mustn't have been resurfaced since Sunday because the rink has snow tracked and caked onto the rink from the zamboni wheels. It seems the zamboni only does the east 3/4 of the rink. The rink guard is concerned about 4 places in the ice where there are deep grooves. 2 are from skates that must have been extremely sharp, and 2 are from "vandalism" (kids whacking the ice with their skates making "potholes"). These holes have gotten worse through a lack of maintenance.

The change room still has a couple of problems that are easily fixable: soap in the washrooms. Fixing the wall in the women's washroom. And the men's bathroom may have a problem - the smell of pee was very strong, you can smell it as soon as you walk in.

12.30pm - snow unshovelled on steps to rinkhouse, but shoveled on ramp. 14 hockey players and 10 pleasure skaters.

Staff say there's been a great improvement to the facility - same for ice maintenance. The recreation boss has a great reputation around here. In his tenure the rink got repainted inside and outside. Staff say he schedules them fairly, he got new benches for skaters and always has extra schedules (even holiday schedules) for people to take home! Now that is community minded! Best of all for skaters: new mats have been laid down and a new floor inside Greenwood so that the ante-room part of the changeroom area is totally accessible with skates on. Staff are friendly as usual.

Ice looks excellent - as it should, with a Zamboni driver on-site at all times 6-2pm and 2-10pm. Anytime the staff want a flood or scrape they just need to ask. While the driver is very accomodating the zamboni itself is not always so helpful- it breaks down frequently. Staff say it is the worst machine in the city. Apparently the Local 416 zamboni driver reads in another part of the building during the day, when he's not running the machine. A little more thorough shovelling would be great, especially in the path between rinks to the hockey pad.

On Friday the rink shut down with 15 cm of snow but by Saturday at 12pm it was open again on both sides.

Fresh paint outside and on the boards and the snow has been well shovelled. The new benches and wooden staircase still look great. There were 12 pleasure skaters and a happy scene. Ice is in great condition, they are serviced by the flying squad.