Two plow trucks came in the morning and cleared off the snow piles by 12 noon. They were expecting the zamboni but it didn't come until 1.45 (went to Wallace Rink instead). The Friends of Christie Pits Park planned a special Family Sunday, with cookie dough for kids to make cookies, and even a Santa suit, in case anyone wanted to dress up as Santa. The snack bar was open and had apples and oranges, mini-pizzas, organic hot dogs, hot chocolate and packages of tasty-looking donuts. Food donations and skate rentals took in $64.49. There was a fire in the woodstove, but no campfire outside because the wind had picked up again and there were some heavy snowflurries too. 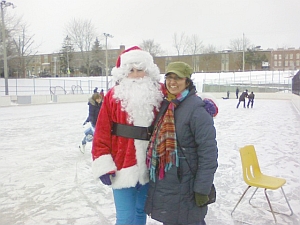 Monica Gupta, chair of the Friends, with Santa 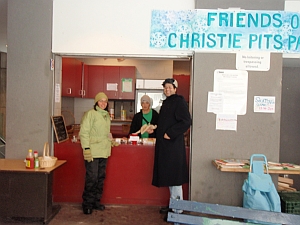 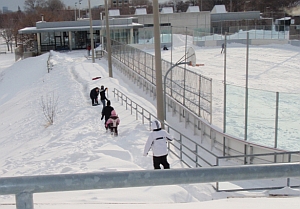 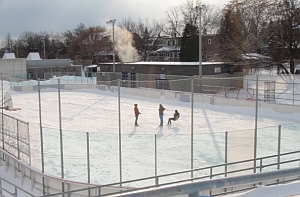 The Rink program staff spent a long time shovelling the access path leading down from Barton Street. This path is not only the north access to the rink, it's also one route to the north toboggan hill. Christie Pits is famous for its toboggan hills, and today there were lots of kids there. Not many people skated -- too snowy -- but the sledding was fine. 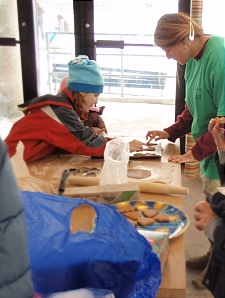 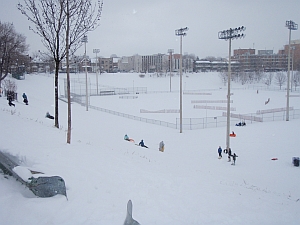 Tobogganing on the north hill

More snow had fallen overnight, so the ice was snow-covered. The zamboni began clearing the snow on the hockey side at 9 a.m. That was, of course, very slow going, and the zamboni ran out of fuel at about 11.30 with the pleasure-skating side not done. No plow ever came.

The natural gas fuel tanks at local rinks are not under much pressure, for safety reasons, so it takes many hours to refuel. That meant the rink was only skateable on one side until 6pm.

Some more snow fell overnight and there were flurries this morning. At High Park at 1 pm, the pleasure-skating ice was open and a zamboni was on the hockey side. There were 15 people skating.

At 1 pm, the pleasure-skating side is open, and has 4 skaters. There is a big Case Loader on the hockey side, clearing off the snow.

Two plow trucks came at noon and the zamboni and an extra labourer in another truck came at 12.30, worked on the rink but were not all done when they had to leave because their shift was near the end and they had to get back to the service yard. No more ice maintenance after that, but people were still able to skate. 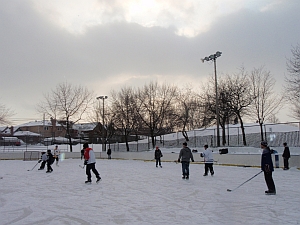 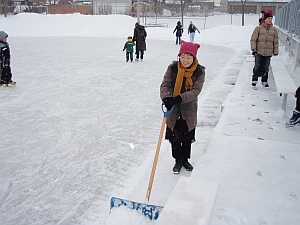 No ice maintenance at all. Over the course of the day different groups of hockey players cleared part of the ice manually leaving two sections large enough for shinny and pleasure skating.

The rink staffer (building attendant) arrived at 10 and spent two hours clearing snow on the front path and around the rinkhouse. Shortly after noon three local teenagers asked if they could clear out part of the ice. The building attendant went out with them and told them not to put any snow against the boards, because that would make it harder for the Zamboni to clear the ice. He also warned them not to lose any pucks in the snow, pointing out that a puck can damage a Zamboni. The three teenagers cleared out a section in the middle of the ice and began playing. Later a man and a woman came and cleared out a second section and began playing there.

The building attendant made some hot chocolate which he gave out to people who came by to see if the rink was open. A grandmother who lives up the street stopped in with four children. The children had rented skates before during a Saturday pleasure skate. They were anxious to go skating again. The rink staffer said that Sunday afternoon was shared use, which meant they would have to skate while people were playing hockey. He pointed out that Wallace-Emerson was open and that it had a separate pleasure-skating pad. The children, however, didn't want to walk to Wallace. The grandmother finally decided to rent three pairs of skates. By that time the first group of hockey players had left and the children were able to use the patch of ice the players had cleared. The children also spent time in the rinkhouse eating hot dogs and looking at the rink's small collection of children's books.

Some local hockey players also stopped in. They didn't bother bringing sticks or skates. They just drank hot chocolate and hung out for a while. Later the building attendant got a call from Christie Pits asking if there was any shinny at Campbell. Two men had come to Christie to play hockey, but couldn't because that rink only had pleasure skating at the moment. The building attendant explained that there had been no ice maintenance but that two sections of the ice had been cleared by rink users.

A little while later two men showed up at Campbell. They wanted to play shinny and asked if there was a charge for using the ice. The building attendant said skating and shinny were free. He asked the men if they were from out of town. The men said they had come from Brampton looking for a place to play shinny. Staff at Christie had directed them to Campbell. The building attendant told them Toronto operates 49 compressor-cooled outdoor rinks. The men said they had just learned that by going online. They thought this was sick quickly explaining that sick meant good.

They asked if they could borrow shovels to make the cleared section of the ice larger. The rink staffer said if they were willing to push the snow to the main gates at the west end of the rink, he would clear the snow from there. The building attendant also warned them about not losing any pucks in the snow. The men cleared a very large section of the ice. It took the building attendant two hours to clear the pile of snow they left at the gate.

After the men from Brampton left, a group of four players took their place on the the patch of ice they had cleared. When the building attendant left at 6, the four men were still playing. Like the previous groups of players, they were warned not to lose any pucks in the snow.

During all the day's snow-clearing one small rink shovel went missing. 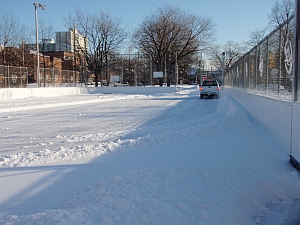 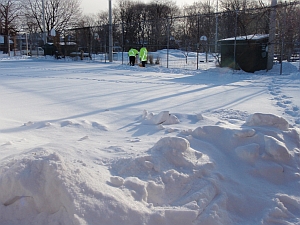 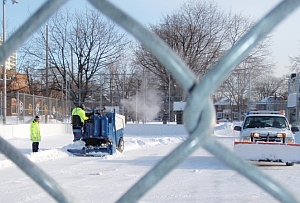 There were snowflurries in the night but they didn't amount to much. At 9 a.m. a plow-truck came, plus three staff worked on shovelling out the boards. Then one of them, the zamboni driver, got out the zamboni and tried to help, but he got the zamboni stuck in deep snow almost right away.

It took a while to get the zamboni unstuck, and then the plow-truck kept on clearing the hockey rink. When it was done he moved to the pleasure-skating pad but he didn't want the zamboni to resurface the hockey ice until he was completely done on both pads. By the (about noon) there were a lot of people waiting to skate (parent-and-child shinny hockey time). They could see that the hockey ice was ready, and they were frustrated that they weren't being let on. 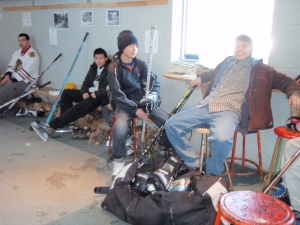 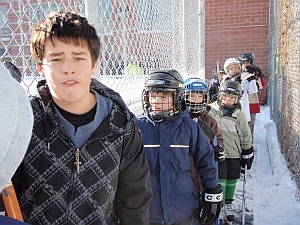 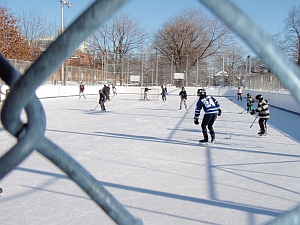 After some negotiation between program staff and the maintenance supervisor, the zamboni was allowed on the hockey pad and resurfaced it. Happy skaters were then let on (around 1 pm) Then the zamboni drove onto the pleasure skating pad, apparently trying to work in tandem with the plow-truck. It was a bit of a cliffhanger to watch, since it several times seemed that the vehicles might collide. But they didn't, and both rinks were open by 2.30 pm.

Ice maintenance summary: on site at 9am, done a bit after 1pm, returned to do a second maintenance at 9:15-9:30pm.

Friday had 15 cm of snow and the rink closed. On Saturday the hockey rink got cleared by early afternoon but the pleasure-skating side didn't get done completely until Sunday. Pleasure-skaters skated in the 15 cm of snow all day Saturday. The zamboni came twice but couldn't get it done and it wasn't enough and the workers got pulled to another rink. There was no plow.

This rink was one of the earliest to get the snow cleared off and reopen -- around 12 noon. At 9 pm the zamboni was on again (it had already begun to snow, second storm).

The "Hockey in the Neighbourhood" program is held every Saturday. Yesterday there was a big snowstorm. The program staff asked the maintenance supervisor if they could be dug out first on Saturday. By 12 noon they had their rink back, and they were able to run the program right on schedule.

Trinity Rink was was ploughed out by three trucks and resurfaced with a zamboni between 5 and 7 pm. At 9 pm there was new snow on it (next storm) but three skaters had pushed some of the snow to the sides with shovels, and were playing shinny.

The rink program staff person said that Trinity has been getting wonderful maintenance this year, often three times a day. He said that in other years they always got the last maintenance, the short end of the stick, but this year it's different.

He also said that unlike in other years, people have been calling the rink and asking about skating times etc. That's because the Trinity Bellwoods Community Centre has been giving out the rink number to people who call for information -- another first. (Rinks numbers have usually been unlisted.)