You are on the [What Went Wrong] page of folder [Reports]

What Went Wrong in November 2009: this is NOT a story about global warming 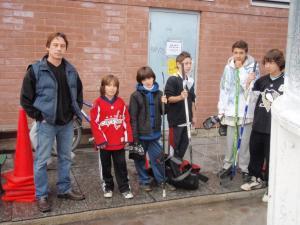 Why none of the City Rinks opened on the scheduled day: two of the rinks had unfinished construction. For the remaining rinks, the main problem was that although city staff were scheduled to flood the rinks, they were not scheduled to flood overnight, which is by far the best time to lay down ice. Attempts to flood in the daytime (not many) and early evening were unsuccessful because of the warm weather. Harbourfront, in contrast, was flooded overnight for six nights and was able to open on time.

1. Albert Campbell (Scarborough Civic Centre): on Nov.20, no ice, the compressors were not on, no staff there, and leaves still blowing around the rink.

2. Broadlands: on Nov.20, the compressors had been turned off and there was no ice.

5. Hodgson: More ice than most, but closed. No floods after 4.45 on Saturday (i.e. what was supposed to be opening day).

6. Irving Chapley: Nov. 20: compressors off. No ice. Staff said they would wait until temperature is 0.

9. Nathan Philips Square (City Hall): Nov.20 -- no staff at 2 pm, ice wet but hard underneath except only water on the northeast section. Nov.21: News came at 1.30 that City Hall is open.

10. Regent Park South: compressors on, some puddles on the rink but mainly concrete, no staff there. No overnight flooding.

11. Rennie: Nov.20: compressors on, ice on pleasure-skating side, lots of water on the hockey side. No overnight flooding. Nov.21 closed.

13. Sunnydale: rink under construction, no access to compressor room, no way to make ice. No overnight flooding.

14. West Mall: compressor power rerouted to hockey side, but not enough ice. No overnight flooding.