The city's web schedule for Rennie makes it seem like the rink has nothing going on at New Year's Day, but in fact the downstairs doors are open for change room and washroom access. A good susprise!

It's obvious that there is a zamboni operator on site (two cars and a city truck in front of the office -- maybe there's more than one city staff). But there is no staff person on the ice. About half the handful of people skating on the hockey side are pleasure-skaters. There are quite a few more pleasure-skaters on the skating trail as well.

The upstairs door to the clubhouse is actually the front door, coming off the parking lot. It's locked and it lacks any sign for open/closed times. One has the impression that the rink is meant for people who know to go around the back, not for people coming for the first time. 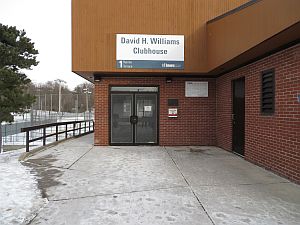 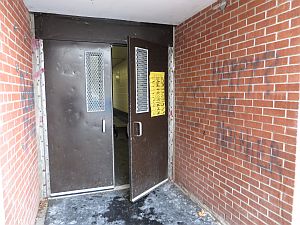 back door open, hurray -- and a schedule on the door

Holidays: on the city's outdoor rinks web page, this rink had only empty space on the city's schedule for Dec.25, 26 and Jan.1, suggesting it would be closed. But according to the schedule posted at the rink itself, this rink was to be CLOSED on Christmas Day, but open for "unsupervised skating" 10 to 6 on Boxing Day and New Year's Day. Since there was a zamboni driver on-site, Etobicoke-style, that meant the change room and washrooms were unlocked, although only from the back way. There were no staff to patrol the rink or help skaters, though, since the zamboni drivers mostly stay in their upstairs room with the blinds closed when they're not doing their ice maintenance work.

2 pm: The rink was open and there were six happy shinny players on the hockey side. One was wearing a helmet, the others were following the code of non-contact shinny hockey -- no helmets. There were no pleasure skaters but by the markings on the ice it looked as though there had been plenty of skaters earlier. 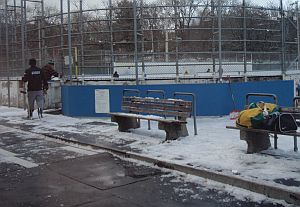 Happy shinny players -- stop for a drink and back on 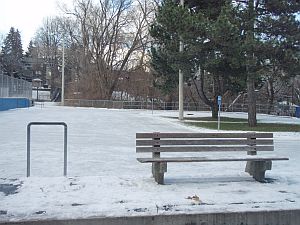 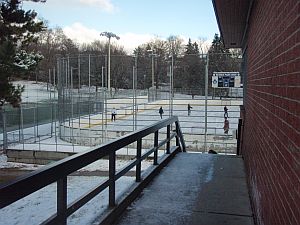 icy stairway leading down to rink

The new zamboni operator was chipping off some nasty ice on the cement stairway going down to the rink from the parking lot. I asked if I should go through the inside of the change room and come down the indoor stairs, but he said it's locked. He prefers to keep the change room locked except when there are programs, he said, because otherwise the kids can roam around in there. If anybody wants to use the washrooms, they can come find him and he'll let them in.

Locked change rooms during rink hours is common in Etobicoke. Also, locked front doors. People in the know can go by the back way.

The closed status for the hockey side was still on the city's website at noon. We went over to find folks skating and a good game of shinny starting. One youth was just telling anyone that would listen about how happy he was that the rink is finally open. He showed us the two new sticks he bought; so that when one broke, he could just keep on playing with the spare. Excited much :)

Today the City's status page said that the rink closed its hockey side due to a technical problem. Late Monday night the ice seemed to be fine and skatable. 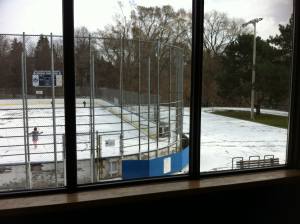 not really a skating rink

10:30 am - from a distance it was clear that Rennie wasn't as 'operational' as the city's site said it was. A few people skating around, the building open with one building attendant. The hockey league was cancelled this morning because the staff said it wasn't in good shape. "too think for hockey, but ok for figure skating". A handful of people were skating around between the two pads. Tomorrow will also be leisure skating on both sides, so anyone wanting to play shinny, will have to wait till Monday. The morning snow is still thick on the ice. Staff say that they Zamboni blade is damaged. They hope it will be fixed by tonight.

3.30 pm: Rennie Rink has more compressor power than any of the other neighbourhood rinks in Toronto -- 200 horsepower. But it sure doesn't look like it today. Other rinks are frozen and ready to go. Rennie is a big puddle. No wonder, since they hadn't even started flooding by Wednesday at this time. Who would imagine that you can get a rink started in only three days, even in ideal ice-making weather like this year? 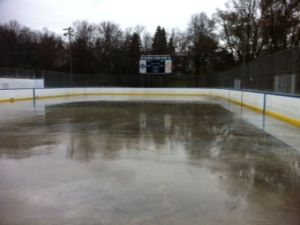 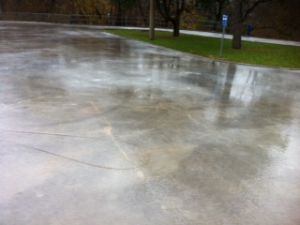 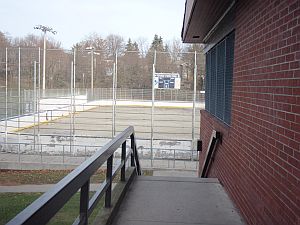 2.30pm:Although the compressors are running (and were already running on Tuesday), there is no ice at all -- just bare cement. Three days before the scheduled rink opening and no flooding! Just a few frozen puddles from the last rain. 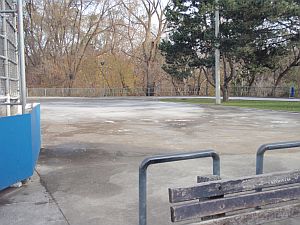 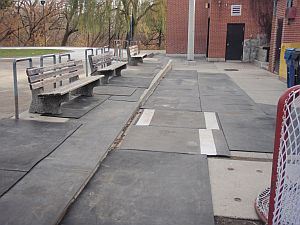 the mats are nicely laid out already.

8.30 pm:There were two ice maintenance staff upstairs in the office. The rinks had a lot of water on them -- some of it frozen and some a lake. It looked like too much water had been put on all at once. The staff said they had put on over a thousand gallons of water. Maybe they didn't hear in their training that at the beginning the ice is supposed to be laminated in thin layers, always just enough water to freeze onto the previous layer within a few minutes.

The staff said there would be no night shift, only their evening shift (3 to 11). So that means there would have been time for maybe one more flood before ice making was over for the day. The staff said they couldn't have started the day before because the sun was too warm. (!)

The corporate culture is: lots of excuses.