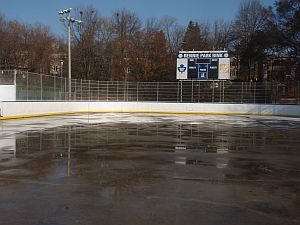 2 pm: a thin layer of ice in a few spots, mainly water 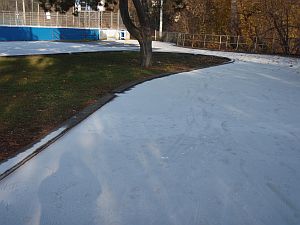 just rime on top of maybe a bit of ice, cement at the edges

A man from Kalamazoo said he was visiting old friends in Toronto and brought his kids to play some shinny. He tried Rennie but it was still closed at 9.30am. He said it looked like the ice was too thin.

He said he grew up in Orillia, worked all over the place and ended up in Kalamazoo. Every year he makes a big rinks there in his backyard, and when he's lucky with the weather, there's ice for three months. 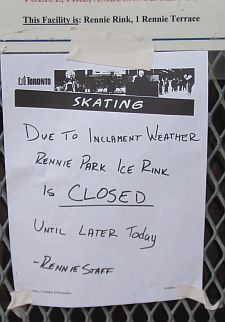 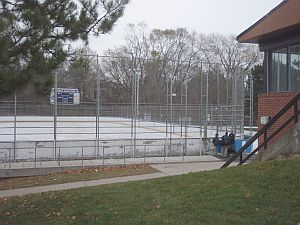 11.25 pm: The rink was swept of leaves, although there were various bits of trash around the edges. No mats or benches were out. The change rooms were locked and no lights were on. No staff were there. No ice has been made yet. The rink schedule is attached to the wall.

Some ice on the hockey pad, none on the pleasure-skating pad.

3 staff guys in the office, no one working outside. One of the staff said they were only icing the hockey rink and not the pleasure pad so they could divert all their power to get the hockey side ready...! They hope to be open in the next few days, but think the rising temps will wreck their ice later in the week and they will have to close again and re-open on the weekend or even Monday. The ice looked good today, though. Change rooms locked. For comparison: Dufferin Rink 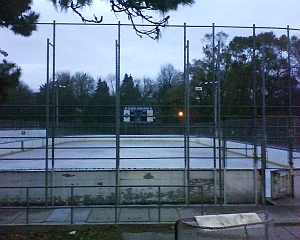 ice on the hockey side 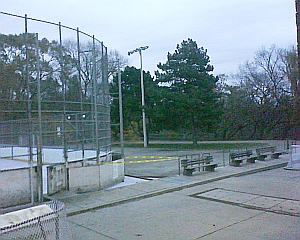 no ice-making on the pleasure-skating side 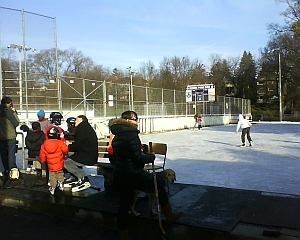 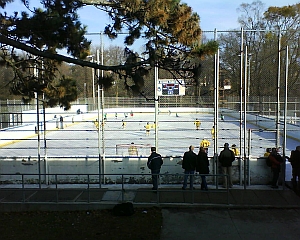 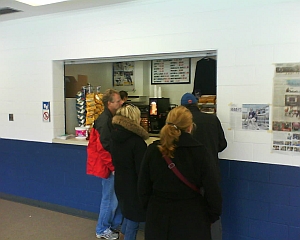 There were over 120 people there. It was all parents and their little kids dressed in shiny bright new hockey gear. Hockey and pleasure side open and in use. Ice looks great. Snack bar was open and there was a line up. Half the people there were parents watching their little kids skate. No signs to say they're open, but here it was obvious.

From rink user Gesta Abols: "Apparently the compressor is broken. They were removing snow and trying to get the ice ready for the Swansea hockey games tomorrow."

Actually the city website lists Rennie as closed because of a broken watermain.

The rink is again listed as open, so the problem has been fixed.