The pleasure-skating ice looks pretty good but the hockey rink has lots of puddles. The operator says: "It's mother nature." He says it won't be ready to open on time. 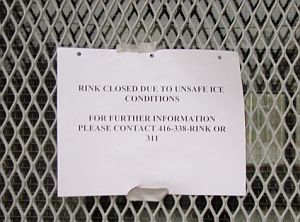 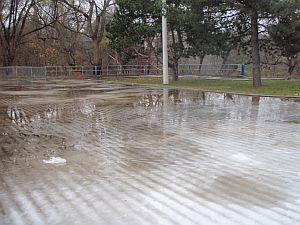 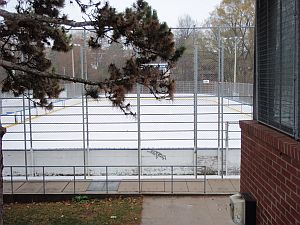 3 pm: The hockey ice looks good but the pleasure-skating side has obviously been turned off and almost all the ice is gone. The front door has a "dangerous ice" sign.

10.30 pm: a solitary rink operator sits in the office by himself. He says he's about to leave. He says he put on five hose-floods and the ice is about an inch thick but he doesn't know when the rink will open.

The hockey side was opened for the first time, in the evening.

1.20 pm: the pleasure-skating rink is still un-iced and the hockey side looks good, but it's locked. 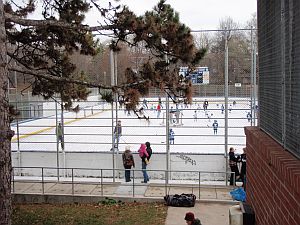 a wave of little hockey players 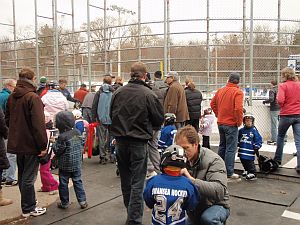 a crowd at the gate 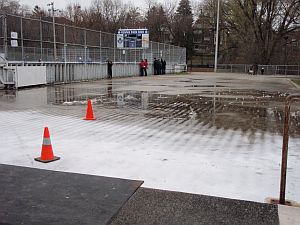 12 noon: the hockey rink is packed with little Maple Leaf players in full outfit. There's a jam at the gate, of parents trying to get their kids ready or onto the ice. The pleasure-skating side compressor is turned off, so that most of that pad is cement. Kids who are there for the learn-to-skate are being rerouted to one end of the hockey rink for their class.

The operator says he has not been told when he can begin to make ice on the pleasure-skating side.

The hockey program has gone up in price by $25 from last year, because the permits cost that much more.

At 5 pm there are five kids hoping to get on the hockey ice, but the zamboni driver says he needs about an hour to make the ice good for the permit later.

The only difference between the two locations is that Dufferin Rink was flooded three times overnight for four days (by volunteers), in the first week, and then had three additional days of Park staff shifts lasting to 2 a.m. At Rennie Rink, the management seems to have come to the conclusion that hockey ice can only by obtained by depriving the neighbourhood of pleasure-skating around their pine tree for two weeks.

A school holiday, and the hockey rink is lively with about 20 kids off school, plus some parents (no sign of any staff). The pleasure-skating side is still bare. Although the rink has been officially open since Nov.25, on this holiday the main doors are locked. Downstairs the rink-side doors are open, giving access to one of the change rooms. The trouble is -- it's only for boys/men. There's no access for the girls/women, not to a washroom either. 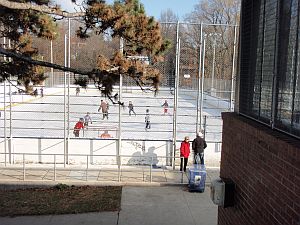 school holiday, fun at the rink 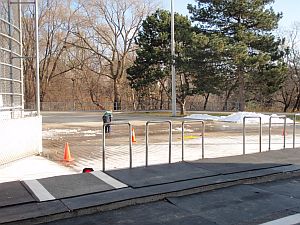 no fun on cement (pleasure-skating side)

The pleasure-skating rink went from zero to sixty between Friday evening and Sunday morning, showing what three good compressors can do. The main room in the rink building is spotless -- and empty, with the snack bar hatch closed. But outside there are lots of people having a good time, and learn-to-skate classes too. 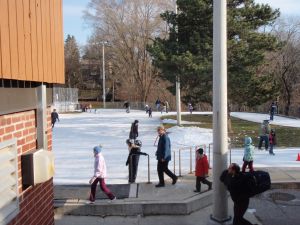 finally, the pleasure skaters have their rink 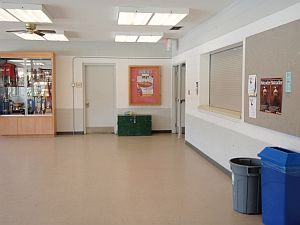 PLEASE ACTION!!! Shinny players at Rennie Rink (adult and young adult men who should know better) are recklessly lifting the puck too high, banging off the boards, etc, and there is now one case of knee fracture already from puck flying TOO HIGH. This is not the NHL for God's sake. Adult shinny players must respect the rules, just like the kids have to, or more danger ahead. PLEASE HELP, the staff there does not show authority, they must monitor the play, and those players MUST RECEIVE CONSEQUENCES. How are these staff trained for this anyway?? Better organization at Dufferin Grove, perhaps they could share and learn.

Assault charges could be laid in the case of the fracture.

I've witnessed this behaviour 3 of 3 times going to this rink so far this year. Please consider this a formal complaint and please advise what is City Rinks department response. I'm interested in what the protocol is regarding training and actions expectations of the staff who work there.

If you look at the top of the cityrinks.ca website, you'll see it says we are the unofficial website for the city's outdoor rinks. That is, we are NOT run by the City of Toronto staff.

So we have no power to do staff training, etc. I have cc'd the City of Toronto supervisor for programming at the outdoor rinks, Kevin Mercer, here, so that he can read what you've sent, and respond. That way you have his address too, if you want to contact him directly. Let me know if he doesn't get back to you -- he might be on holidays and then I can send you a different e-mail address.

I've also forwarded your complaint to one of the Rennie Rink co-ordinators, for him to pass along to his co-workers. Keep us posted! 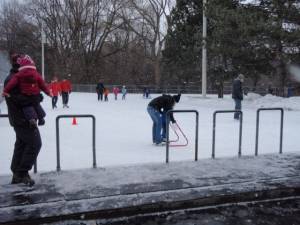 At 11.30 a.m. the front door was still locked, and I soon found out why -- the zamboni driver was still cleaning up the main room after the annual New Year's Eve party that took place the night before. The driver looked very cheerful, although he said he'd been at the rink until 11.30 the night before, and then started work again at 7 a.m. The permit, he said, was from 6 to 10, but people were having such a good time they didn't want to leave. He figures there must have been 200 - 300 people, enjoying a campfire with hot chocolate, and skating.

Now because of New Year's Day, the zamboni driver was working alone. without any rink guards to help. But he wasn't complaining. He discussed ice-making -- how to keep it very smooth without "washboarding" -- i.e. with slight hills and valleys -- by driving the zamboni crosswise as well as up and down. I suggested that Rennie Rink would be a very good place to train new zamboni drivers in the best techniques, but he didn't like that idea much -- they might spoil the excellent ice.

Numbers sample, 5:50pm 25 pleasure skaters (7 with helmets), Swansea hockey league about to take to the ice, 29 inside.