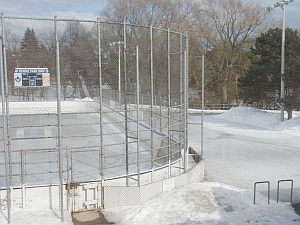 full of water over mushy ice

At 3.30, the rink was very watery and unskateable. The zamboni operator was sitting by the observation room window on his own just reading the paper. He said he doesn't hold out much hope for tomorrow either -- too much water to refreeze properly.

'5 p.m.: Rennie Rink staff say they've had to close the rink because it's full of water. 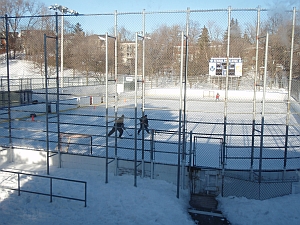 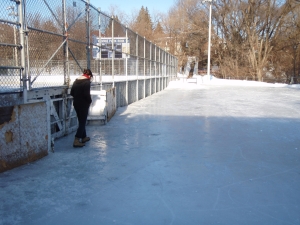 5 pm: 4 on hockey side (ice is good, just a bit mushy on the side) and 3 on the pleasure-skating side, even though the ice looks good there too. Two shinny players say they normally skate at Greenwood or Monarch, but have come to Rennie because it's one of the last rinks open. They also give the rink researchers a thrill by asking if we're from the "cityrinks" web site, which they say is the "bible" for shinny players. They say they wish the ice maintenance would be better in the east end rinks, but there are a few times when those rinks are sublime "but please don't post the times on the web site." So we won't.

1 pm: rink has 15 on hockey side, mostly kids with two adults (no helmets), 8 skaters on the pleasure side. No staff in sight. Ice is very thick (4-6 inches) and only mushy around the nets, solid otherwise. Some shade from the buildings and the trees -- this rink is fortunately in a hollow.

6.05 pm: rink ice is still good but has only two pleasure-skaters on freshly-flooded hockey side (they say the ice is too bumpy on the pleasure-skating side). One kid skating on the pleasure side says there are few kids who come to play hockey because "hockey season's over."

10.45 pm: Six people (5 male and one female) just setting up for pond hockey. No helmets of course. They said they occasionally lose a puck in the trees in the middle of the rink, but not often, "we're too good!" -- with lots of laughter. Very cheerful group. 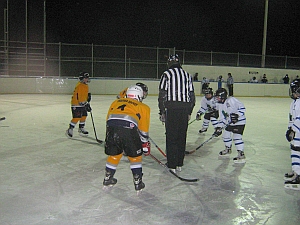 6.30 pm: Kids' hockey, people watching, both inside and out, also 13 people on the pleasure-skating side. Ice looks very good.

12pm Low 10, high 15 celsius. No one is skating or playing hockey, but the gate to the hockey rink is open, A hockey player arrives. He plans to play, He expects more players will show up at 1pm. The city worker in the community centre doesn't know if the rink is open or not. Later two rink maintenance workers at High Park tell a CELOS researcher that they spent the morning working on the ice at Rennie. 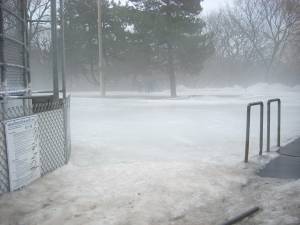 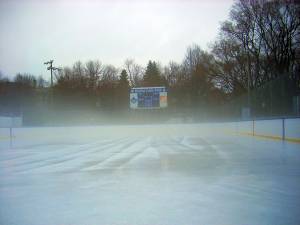 The hockey pad covered in mist CELOS visited Rennie Rink the day before it was supposed to open. Rennie was one of the rinks scheduled to begin its season on December 1, a week ahead of most other rinks in the city. The hockey and leisure pads both appeared to have been flooded. There was a Zamboni and other machinery on the ice.

The worker made some comments about the rink in general. He said Rennie was one of the nicer rinks he has worked at. He said the young skaters were generally well-behaved compared to what he has seen at other places. He mentioned gang problems at another rink where he sometimes works. He said Rennie is far enough out of the way that it doesn't get too crowded and that most of the skaters are from the local area. The Zamboni was on the ice There was ice on the hockey rink There was some graffiti on the rink building Rennie is a beautiful park